Many communities in rural Asia still live without access to electricity, which hampers their ability to provide basic health and education services. Here's how a CSR project by solar giant Yingli Solar and partners transformed the lives of villagers in Laos.

Chinese firm Yingli Solar is widely known as one of the world’s largest solar panel manufacturers and a major player in the global effort to replace energy derived from fossil fuels with clean, renewable power.

But in the tiny, remote village of Ban Lad Khammune in northern Laos, Yingli is a household name for another reason: Thanks to the company, the community has electricity for the first time ever.

As part of a corporate social responsibility effort by its Singapore office, Yingli last year installed solar panels supplying three kilowatts (kW) of electricity to a school in the village, which has a population of about 200. A five-hour boat ride from the nearest city, Luang Prabang, the village is too remote to be connected to the national power grid.

This June, Yingli returned to the village to provide two more installations of 2kW each to another school called the Ban Phongsavang School, and a nearby health clinic. About 120 students attend this school, while the clinic serves 3,000 residents from seven surrounding villages.

The company, which was founded in Baoding, China, in 1998 by businessman Miao Liansheng, is one of the world’s largest solar panel manufacturers today, with offices across five continents. Listed on the New York Stock Exchange since 2007, Yingli employs more than 16,000 staff globally and has installed over 50 million solar panels in 90 countries.

In comparison, the 26 panels donated to Ban Lad Khammune, along with the batteries and inverters that complete a solar system, may be a small fraction of their supply, but they made a world of difference to the village.

Thanks to the 2 kilowatts peak (kwp) off grid system, the school could now conduct night classes, and more importantly, integrate audio-visual teaching aids such as computers into the curriculum. Its premises even doubled up as a community centre for the village.

In the Lad Khammune health centre, the solar energy from another 2 kwp system made it possible for the clinic to extend its opening hours, install fans to keep patients comfortable, and upgrade its medical equipment. 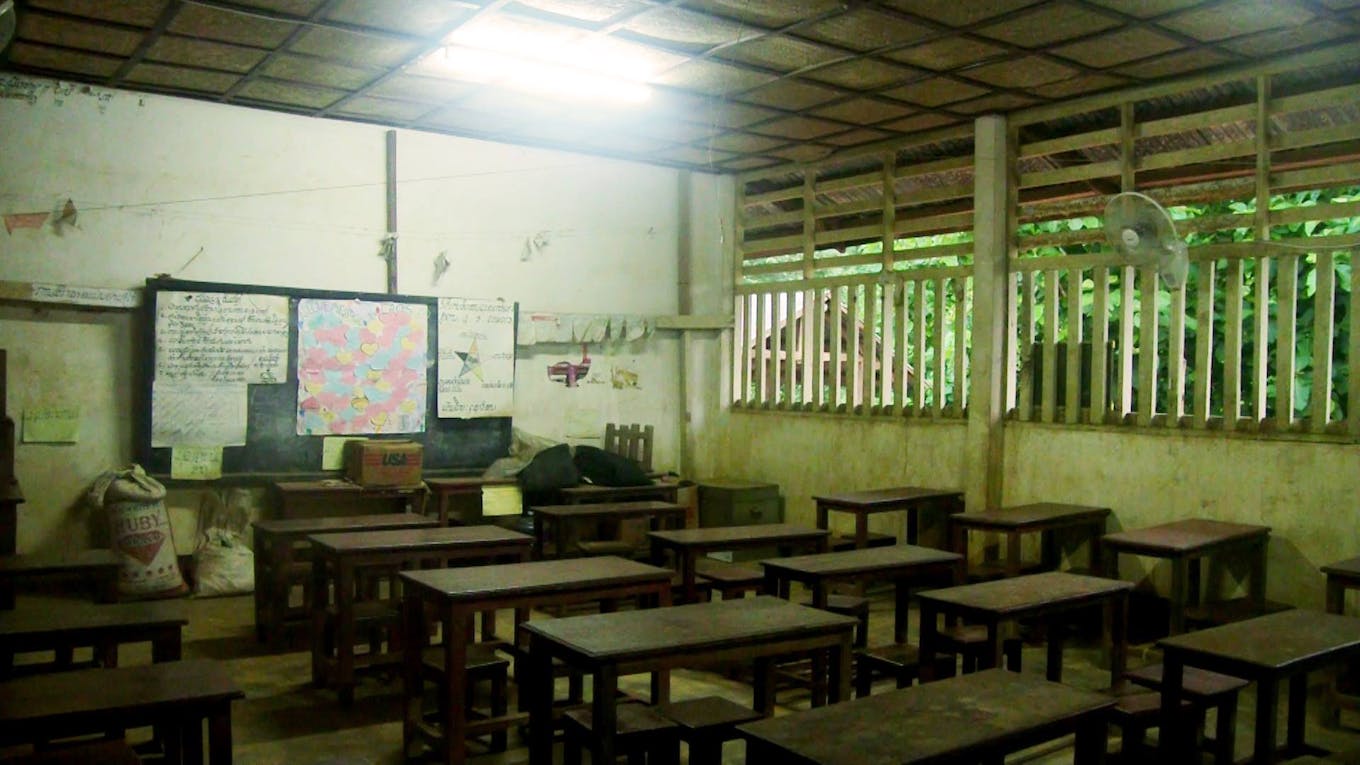 Lights on in the Ban Phongsavang School for the first time. Image: Yingli Green Energy Singapore.

Xieng Tui, the village chief of Ban Lad Khammune, said the local community was grateful for the project as it has provided a better environment for children to study.

“This year, we are glad to have the volunteers back to power the health clinic which will aid the health staff in proper health screening, safe prescription and administering of medications,” he added.

Hospitality firm MyLaoHome Hotels & Villas also supported the project by hosting the volunteer group in a hotel owned by the company, helping translate between the team and villagers, and handling project logistics such as receiving and storing the solar systems.

Each project included solar panels and batteries which allowed the electricity generated to be used day and night.

The solar powered schools now stand out as symbolic beacons of hope for the villagers as their young can now receive their education with the aid of modern technology.

Angie Koh, managing director, Yingli Singapore, told Eco-Business that the project was not easy to implement due to the village’s remote location and lack of electricity, but it was worth the effort to bring clean energy to Laos, where the World Bank estimates that a third of its 7 million population lives without access to electricity.

In Asia, this figure stands at 600 million people, and experts note that renewable energy is the key to scaling up energy access without a corresponding rise in greenhouse gas emissions, which fuel climate change.

“At Yingli, we believe everyone should have access to the power of the sun’s energy,” she noted. “That is why we have invested in working with our local partners to bring energy solutions to people from all walks of life, including underprivileged communities.”

For example, Yingli in 2010 put solar panels on more than 20 football training centres across Africa as part of its sponsorship of the FIFA World Cup that year. Since 2011, it has also partnered with US solar energy non-profit Grid Alternatives to supply more than 3 megawatts (MW) of modules to 1,200 low income families in America,

Last year, the company installed a solar installation on a high school built by the United Nations High Commissioner for Refugees (UNHCR) in Kaoma, Zambia.

For the Laos projects, YMCA of Singapore worked closely with local partner, MyLaoHome, to identify villages that would benefit from the project.

The groups assessed the site for accessibility, safety and potential for community development before recommending it to Yingli. The youth volunteers helped lay the electrical wiring and installation of lights, fans and other equipment, while an engineer from Rezeca Renewables helped oversee the installation and set-up of the solar systems. 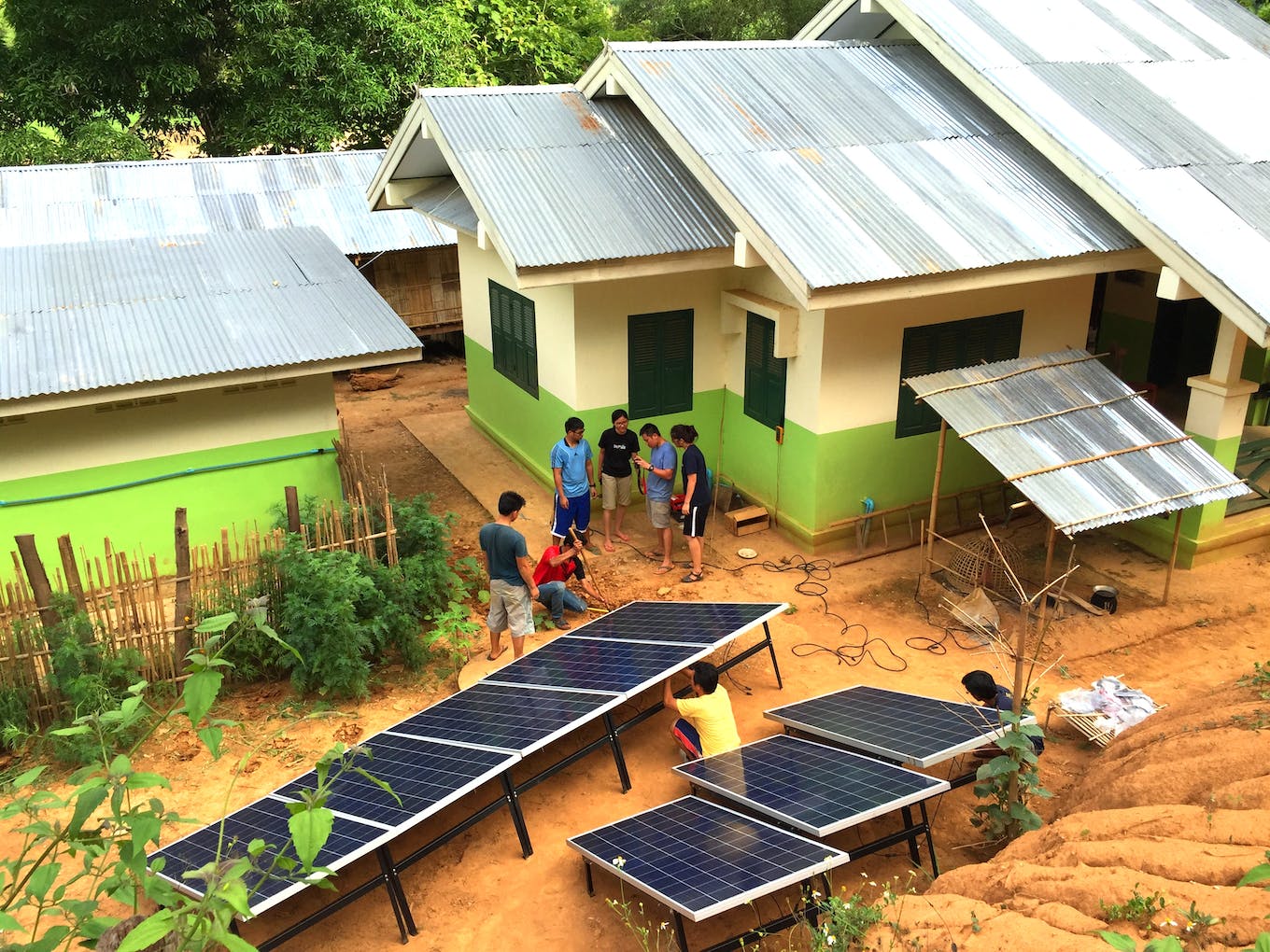 Transporting the batteries, solar panels, and equipment to install the panels over on boats was an arduous task, recalled Koh.

The fact that the village had no electricity at all meant that power tools could only also be used for a limited period of time on pre-charged batteries, Koh said.

“It was a very labour intensive process, but when you switched on the lights at night, the joy and astonishment on the faces of villagers young and old made it all worth it,” she shared.

Participating in the project also opened the volunteers’ eyes to the importance of access to clean, renewable energy in improving the lives of people.

Ryan Jin, a member of the team from NTU Earthlink who participated in the project, said: “Beyond the lights and fans the solar panels are powering right now, we are opening up new possibilities for the village”.

Future project teams would be able to use the solar power to operate more tools and improve the quality of subsequent installations, he added.

With this increased capacity, it could be possible for the school or other organisations to provide students with ultra-low power laptops to enhance their learning, and the improved teaching facilities might also attract more teachers to work at the school, he said.

Andrew Leo, assistant general manager of programmes, YMCA, added that in a village where most homes do not have electricity, “the solar powered schools now stand out as symbolic beacons of hope for the villagers as their young can now receive their education with the aid of modern technology”.

Yingli Singapore has no plans to stop its CSR efforts here. The company is exploring opportunities for similar partnerships in Sabah, Cambodia, and Thailand, noted Koh.

“Yingli Solar is not a brand that is only interested in selling solar panels,” she said. “We are a brand that stands by our mission for being social responsible to our communities.