Does investing ethically—avoiding fossil fuels, weapons, and tobacco companies and buying into sustainability, health, and education—mean a compromise on returns? One Australian company is proving that the answer is a resounding no.

When people put their savings in an investment or retirement fund, they can be forgiven for caring about only one thing: to secure healthy dividends that will provide financial stability for the future.

However, there is a slow but sure tide of change sweeping through companies and individuals alike, where in addition to financial security, investors are paying more attention than ever to the impact of their decisions on future generations and the planet.

The trend goes by many names—responsible investment, ethical investment, and divestment to name a few. But fundamentally, it points to the fact that people and organisations are choosing to stop financially supporting socially and environmentally irresponsible companies.

And it is gaining momentum: The relatively young fossil fuel divestment movement, for example, has mobilised institutions and individuals representing at least US$5 trillion to purge their investments from fossil fuel companies, a 50-fold increase from 2015.

But long before the divestment movement began to brew in American universities in the early 2010s, one Australian company decided that it wouldn’t invest people’s savings or retirement funds in fossil fuel, tobacco, or other harmful companies as early as the mid-1980s.

Headquartered in Sydney, Australian Ethical is an investing company that handles managed funds, pension funds, and superannuation - the latter is Australia’s system for workers to save for retirement while working, with employer contributions.

Regardless of the type or value of the investment, the company follows a strict set of rules on the companies it actively seeks out, and those it avoids. This is encapsulated in a 23-point Ethical Charter, which was drafted when the company was established in 1986 and has not changed since. 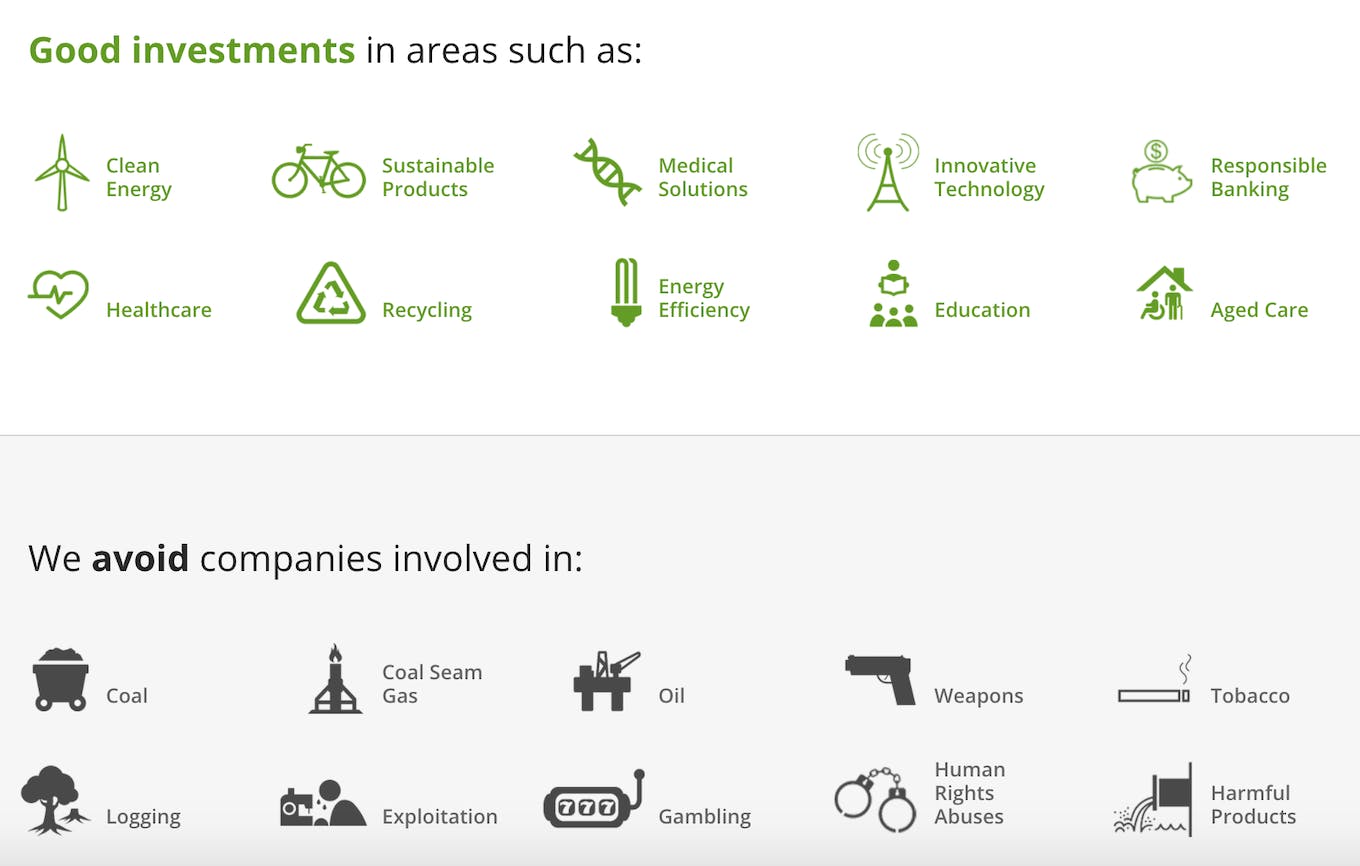 Phillip Vernon, managing director and chief executive officer, Australian Ethical, tells Eco-Business in a recent interview that when the company was founded in Canberra by four friends, “it really was a pioneering concept in Australia”.

The moral case for responsible investing is clear, says Vernon. “The dominant force in climate change these days is global capital,” he explains. “It needs to take its stewardship role seriously and behave responsibly.”

Consumer demand is a key way to bring about this shift, Vernon adds. “For individuals who may be frustrated with the state of politics in the world today, directing where their money goes is the best way they can influence things.”

Unfortunately, the economic case for ethical investing took a little more convincing. “People would expect you to compromise returns by investing ethically,” shares Vernon, who has headed the company since 2009. But this is not true, he says.

“We don’t say that ethical investing will give people a better performance,” Vernon clarifies. “But if you invest ethically, there is absolutely no reason why you should not expect a competitive performance and a balanced, diverse portfolio,” he adds.

In its early days, the company only had a small but loyal band of followers who believed this. But this has grown to about 30,000 customers today.

Australian Ethical achieved this by undertaking a significant transformation after spending about a decade in a start-up phase, shares Vernon.

For individuals who may be frustrated with the state of politics in the world today, directing where their money goes is the best way they can influence things.

The company took measures such as relocating from Canberra to Sydney to attract a wider talent pool, centralising its investment team in one location, and improving its internal administration processes so that it could deliver high service standards and competitive fees to clients.

These steps paid off, and the company listed on the Australian Stock Exchange in 2002. Three years later, it crossed the A$200 million mark for managed funds.

Today, it has about A$1.6 billion in funds under management; Australia’s total superannuation assets are worth about A$2.1 trillion. The company boasts returns that are competitive with the rest of the market, proving that ethical investing doesn’t require a financial compromise, says Vernon.

The investment performance of a number Australian Ethical’s  funds, for example, ranks in the first quartile in Australia over several timeframes, and the value of funds it manages has steadily grown since the company’s inception.

While Australian Ethical’s commitment to its charter is clear, implementing it can be a bit more challenging, shares Vernon. But this gives the company an opportunity to engage firms to drive positive change.

The firm maintains a list of the companies it invests in on its website, but closely monitors the activities of these firms, and will divest if they violate the Australian Ethical charter, shares Vernon.

But the company is keeping a close eye on whether the bank goes ahead with a decision to lend to the controversial Adani coal mine project in Queensland, which would be one of the largest coal mines in Australia.

“If it goes ahead, the Adani mine would cause such an increase in greenhouse gas emissions that it would be inconsistent with staying within a 2 degrees Celsius increase in global temperature,” notes Vernon. “If Westpac decided to lend to this coal mine, we would have to divest.”

This is something it has done in the past. For instance, when one of the companies in its portfolio, reverse vending machine manufacturer Tomra, acquired a company which made tobacco sorting machines in 2012, it fell afoul of the ethical investment charter.

After taking steps to engage with the company’s decision makers and its other investors, the company eventually divested from Tomra in May 2013, noting that “we do not compromise on our commitment to our ethics.”

And even as it works to balance its ethical and economic objectives, the company also gives back to the community by donating 10 per cent of its pre-tax profits to humanitarian, environmental, and animal welfare causes in Australia and abroad.

If Westpac decided to lend to this coal mine, we would have to divest.

Going forward, the company has its sights on growing its customer base from the current 30,000 investors to 1.5 million people, and increasing the value of its investment portfolio to A$5 billion by 2020.

“Our challenge in reaching our target market is two-fold,” says Vernon. “Firstly, we need to access these people. Then we need to convert them so that they trust us with their life savings.”

To achieve the former, Australian Ethical has invested heavily in digital marketing, growing its community of Facebook followers almost 10-fold since 2013. The company says its Facebook engagement rate of 11 per cent is higher than that of most other financial institutions in Australia.

“Once people are aware of our conviction, they are more likely to trust us,” he says, adding that this is backed up by the company’s strong investment performance in recent years.

For example, in Australia, there is a growing recognition that if investment managers fail to factor in the risk climate change poses to their portfolios, they could be in breach of their fiduciary duty, he explains.

Already, about half of all assets professionally managed in Australia—that’s about A$633 billion—are overseen by responsible investment practices, pointing to rising awareness of the need for ethical investment among financial decision makers.

This, combined with rising social awareness about the need for climate action and sustainability points to a promising future for ethical investing, he says.

“Everybody will ultimately invest like we do because natural forces will compel them to do so,” predicts Vernon, adding that “we see ourselves as a leader so we don’t mind the competition”.

“We must invest ethically,” he adds. “We’ll stuff the planet if we don’t.”