Conditions at ground zero of Indonesia's raging forest fires have deteriorated to the extent that the government is contemplating declaring a state of emergency. Here's what life is like at the heart of the crisis.

The fires in Indonesia’s forests and peatlands have raged for almost three months now with no respite, prompting the country’s officials to announce on Tuesday that they may declare the haze crisis a national emergency.

Doing so would allow the government to buy firefighting equipment and deliver help to affected areas more quickly. The country’s Vice President Jusuf Kalla said that the final decision would be made by President Joko “Jokowi” Widodo after he returns from a state visit to the United States on Thursday.

Jokowi, on his first state visit to the US, was scheduled to meet with corporate giants such as Apple, Google, and Microsoft later this week, but decided to cut short his trip due to the worsening situation at home.

On Monday, the archipelago nation’s Environment and Forestry Minister Siti Nurbaya Bakar also announced in Parliament that lawmakers may review a law whereby smallholder farmers can slash and burn up to two hectares of forests for cultivation.

The government has deployed 30 aircraft and 22,000 troops to deal with the blazes, adding to ongoing efforts by plantation companies to fight the fires on their concessions.

Since Sunday, the government has also had close to 30 ships - including 11 navy warships - on standby in the waters off Banjarmasin, South Kalimantan, to evacuate haze victims if necessary.

While no official evacuation has taken place yet, a group of eight people forced out of their homes in Palangkaraya, Central Kalimantan journeyed six hours to seek refuge in these ships on Wednesday. The Pollutant Standard Index (PSI), a measure of air quality, has constantly hovered between 1,000 and 2,000 in the city in recent weeks. Anything above 300 is considered hazardous to health.

Despite efforts to extinguish the fires and provide relief to citizens, conditions in Indonesia have steadily worsened in recent days, causing economic losses, a rising death toll, and an environmental disaster.

About 19 people have died due to haze related illnesses in Sumatra and Kalimantan, and more than 500,000 cases of acute respiratory tract infections have been reported since July 1, according to Indonesian media.

Wildlife in the country - considered a hotspot for biological diversity - has also had their habitats destroyed, with several orangutan conservation centres reporting on Wednesday that their charges are “sick, malnourished and severely traumatised” due to the choking smoke.

The fires are also exacerbating climate change: Washington-based non-profit World Resources Institute on October 16 reported that the daily emissions from Indonesia’s forest fires exceed those of the entire American economy. The United States is the world’s second largest carbon emitter after China.

The Indonesia-based Center for International Forestry Research (CIFOR) estimates that the haze will cost the region about US$14 billion in expenses related to agriculture production, forest degradation, health, transportation and tourism, compared with US$9 billion in 1997, when Southeast Asia faced a similar crisis.

Here are some scenes of the situation at ground zero. 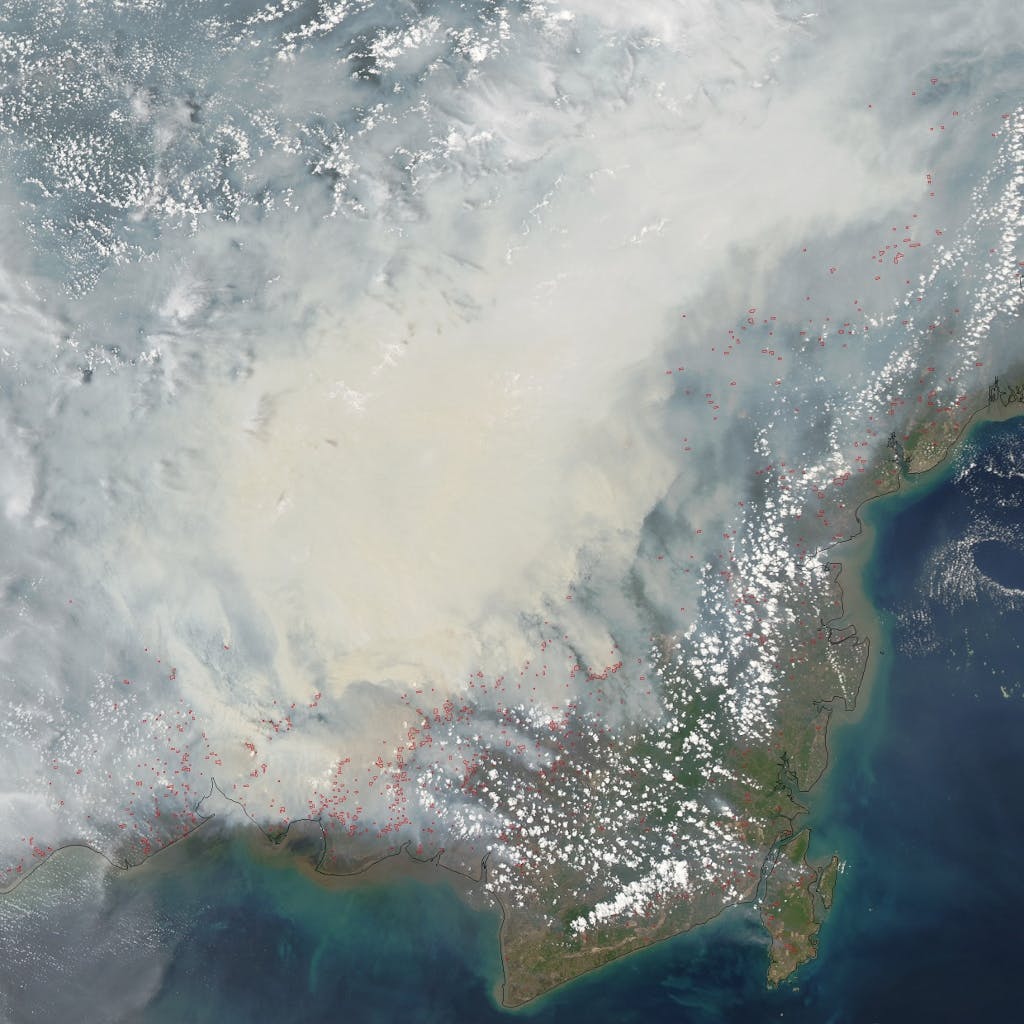 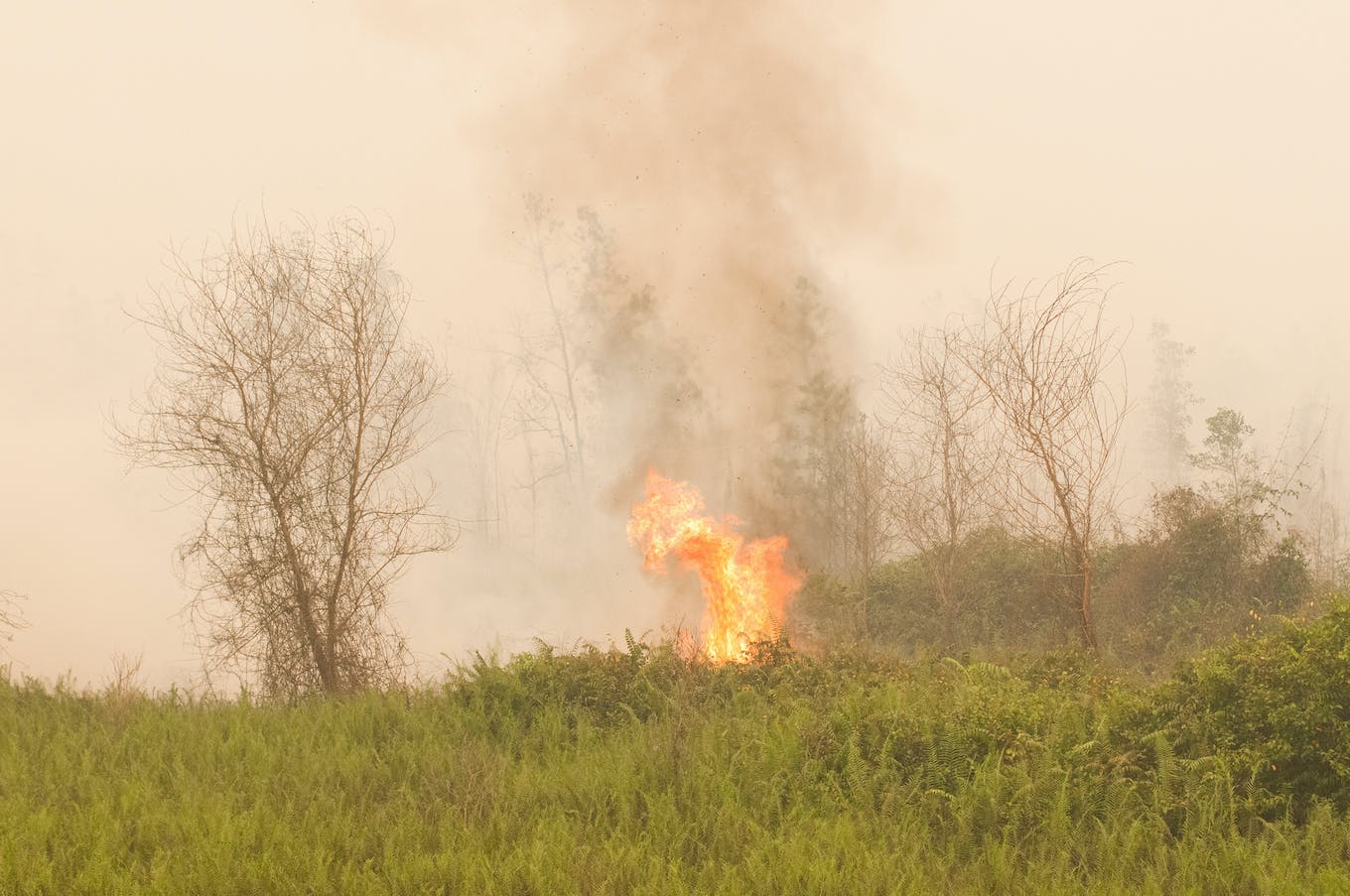 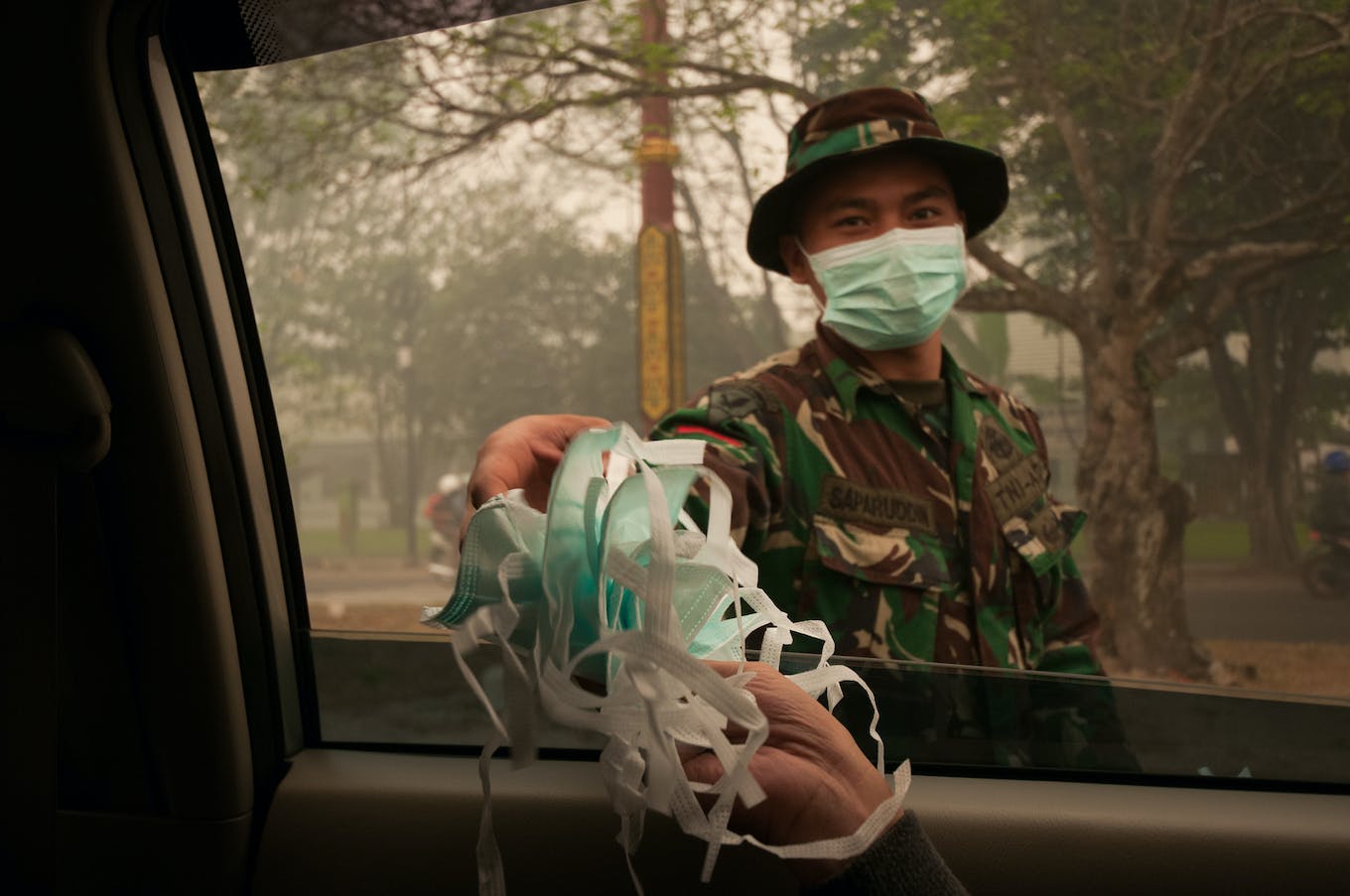 An army officer helps to distribute masks to car passengers driving through the city of Palangkaraya, Central Kalimantan. These thin surgical masks do little to keep out the fine particulate matter known as PM 2.5, which is the most damaging to health.  Image: Aulia Erlangga/ CIFOR, CC-BY-NC-SA 2.0. 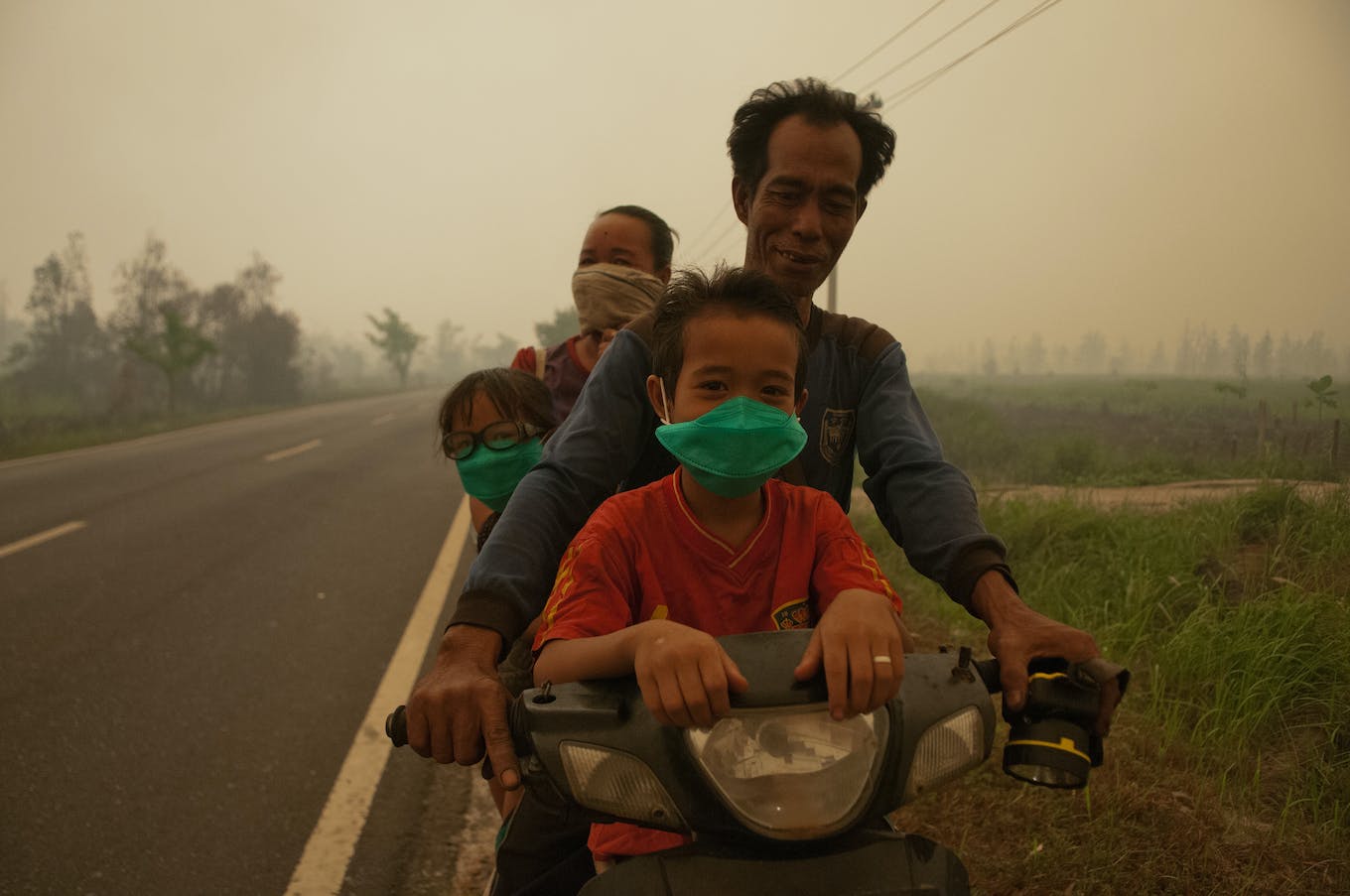 A family riding a motorcycle through the thick air and smoke from peat fires outside Palangkaraya, where the Pollutant Standard Index (PSI), a measure of air quality, has constantly hovered between 1,000 and 2,000. Image: Aulia Erlangga/ CIFOR, CC-BY-NC-SA 2.0. 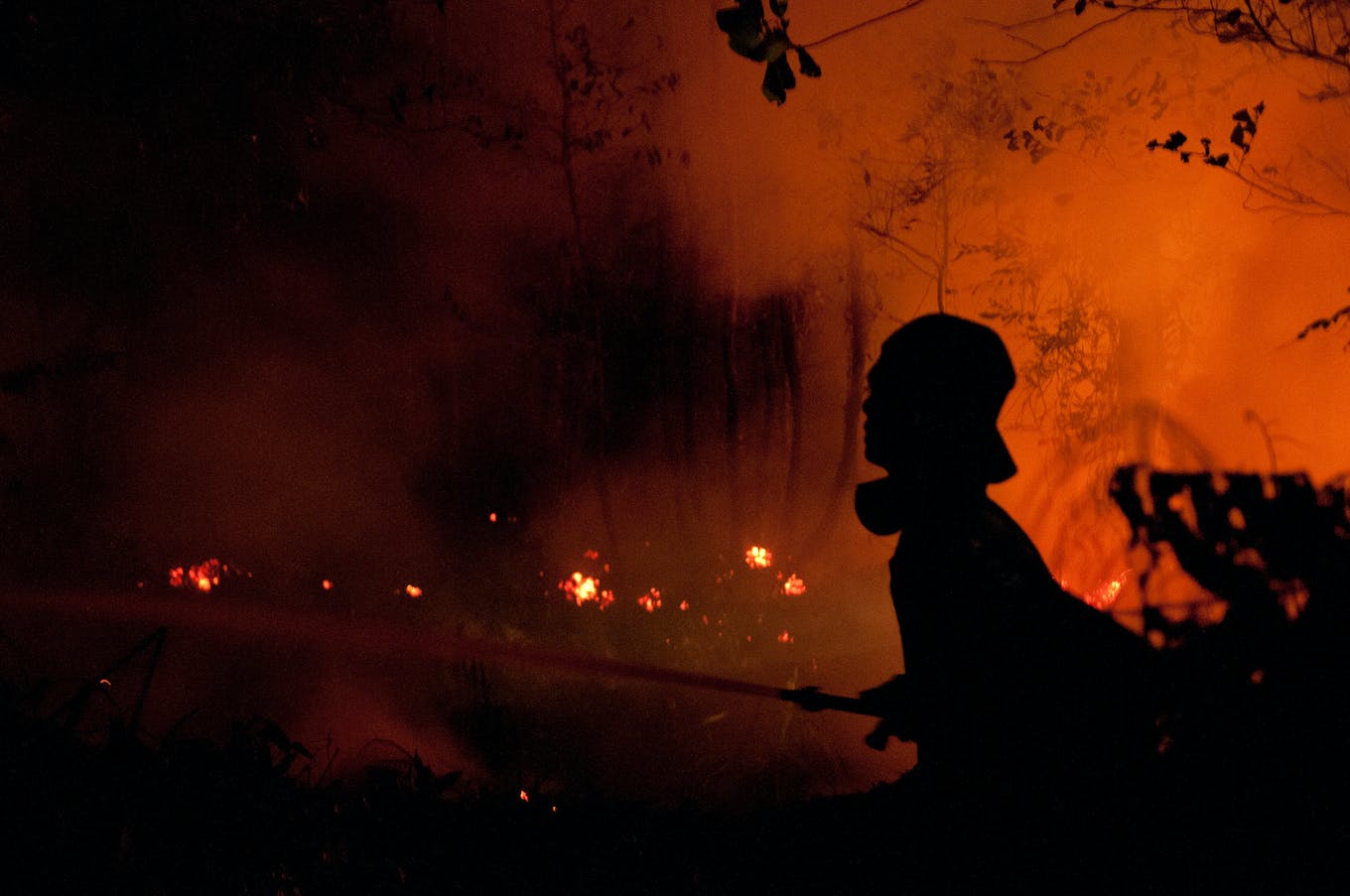 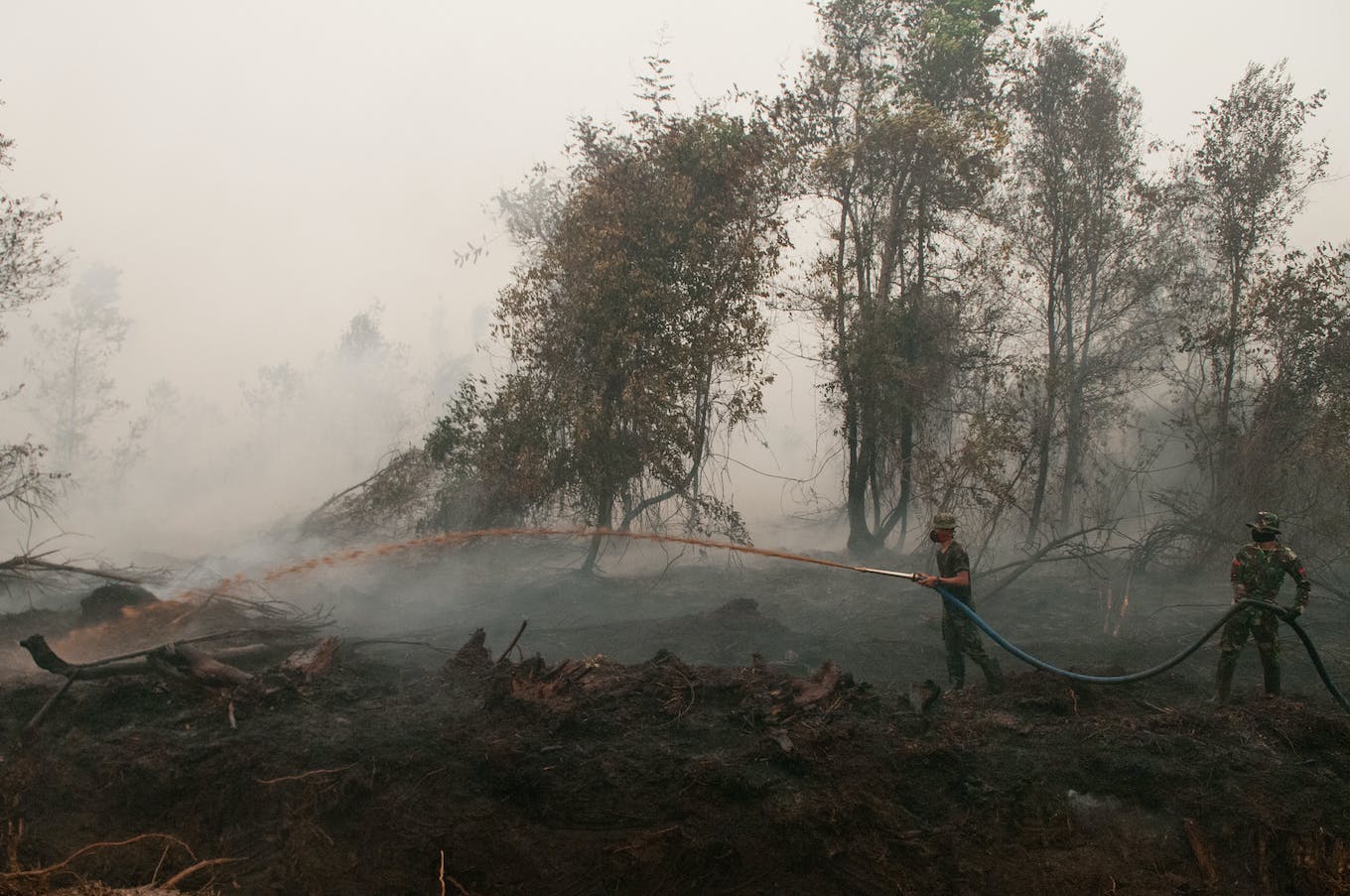 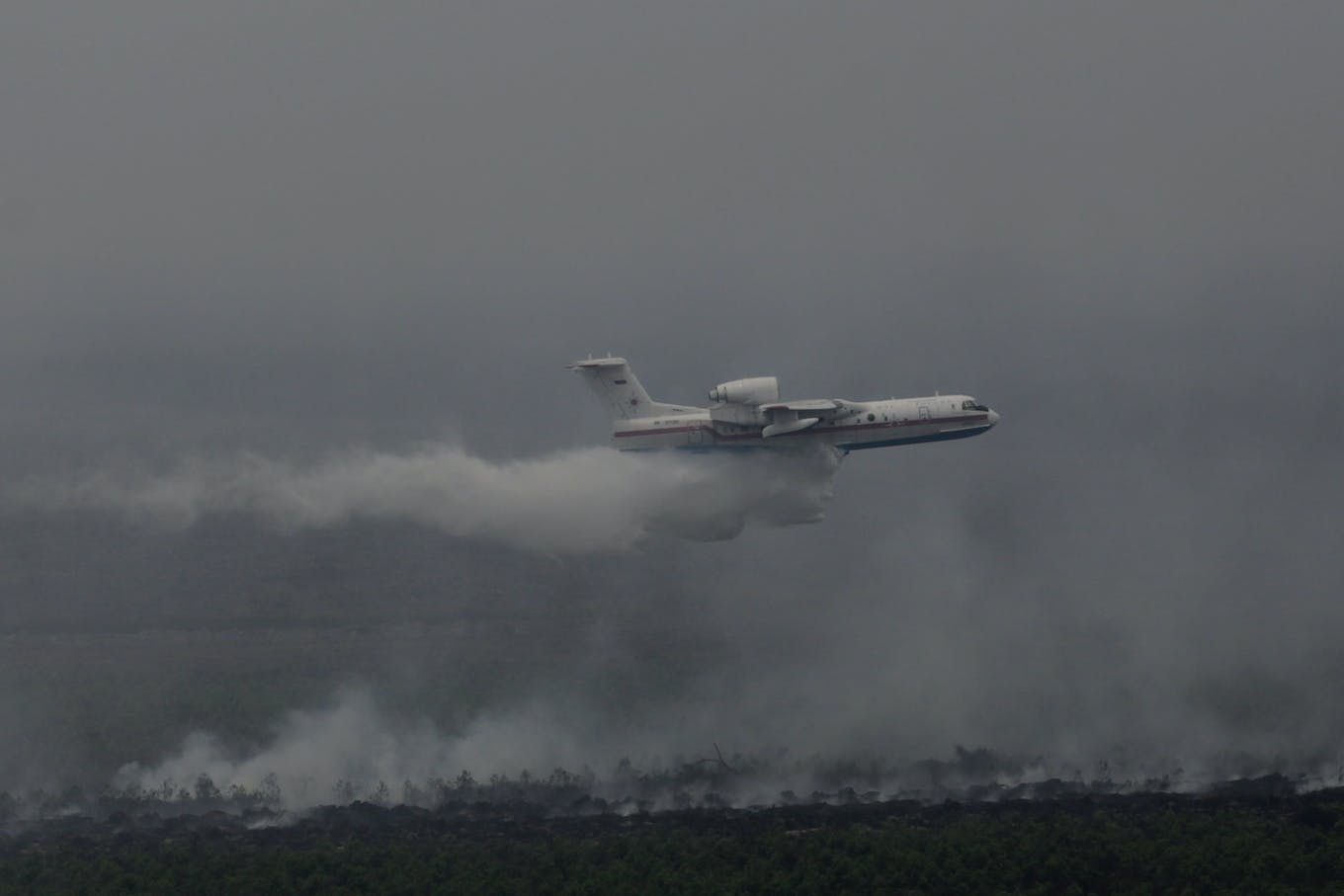 Water bombing operations in South Sumatra. This is one of two Russian Beriev Be-200 amphibian water-bombing planes with 12,000 litre water capacity brought in by paper giant Asia Pulp & Paper earlier this week to support the Indonesian government’s efforts. Image: APP 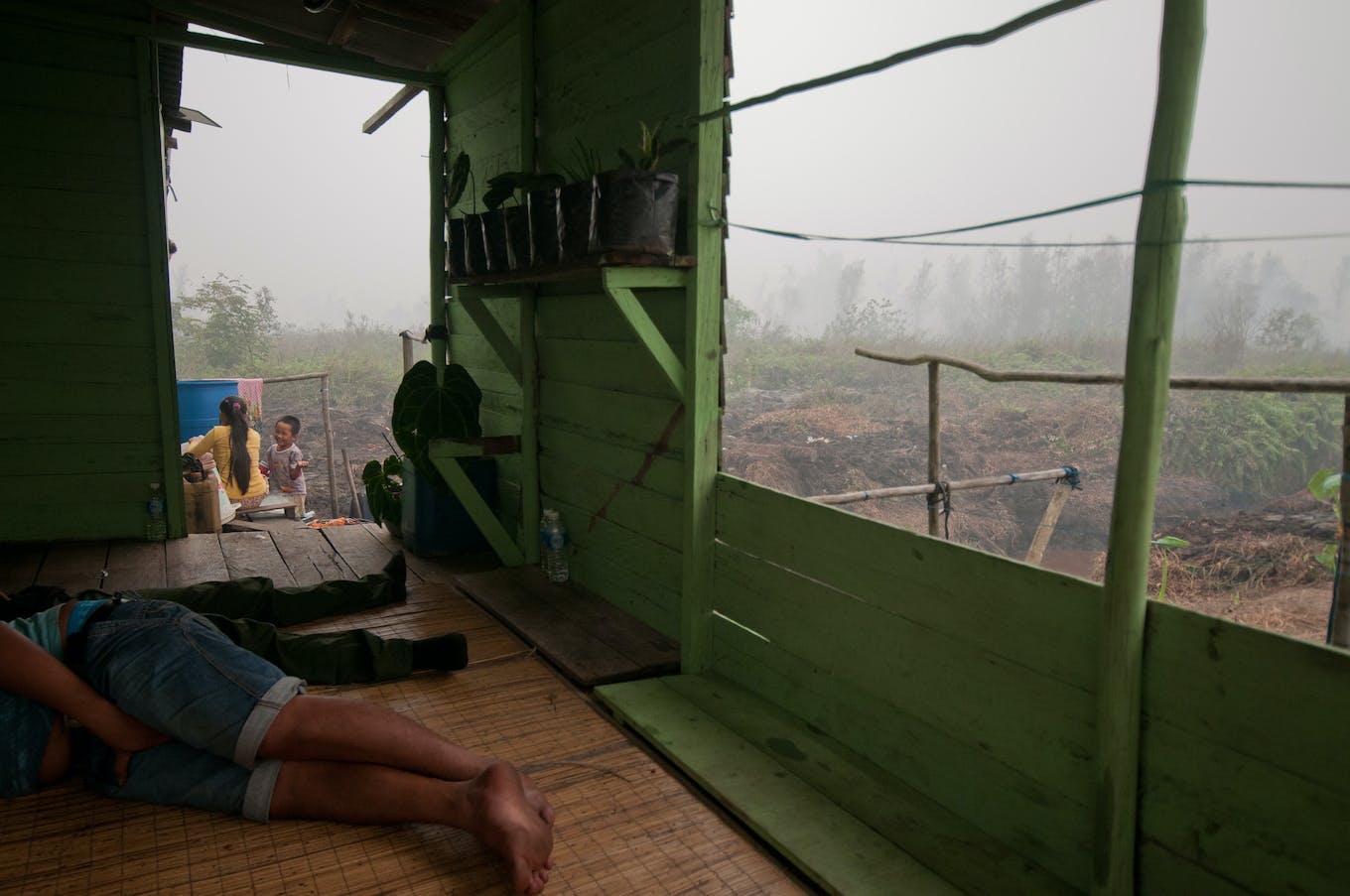 A family takes a breather from the haze outside Palangkaraya. The smoke has disrupted the everyday life of citizens and caused a host of health problems in affected areas. Image: Aulia Erlangga/ CIFOR, CC-BY-NC-SA 2.0.