How did the world lose tropical forests the size of Bangladesh in 2017?

Ten years after its launch, a new report shows that REDD+, a United Nations program to incentivise forest restoration, doesn't seem to be working as well as hoped amid tropical tree cover loss in many countries ramping up in recent years.

It has been a decade since the United Nations launched REDD+, an ambitious program to incentivise forest restoration and conservation in developing countries, as a part of a global effort to reduce greenhouse gas emissions.

The program has been heralded as an integral part of the solution to climate change as tropical forests and wetlands can deliver 23 per cent of the total mitigation needed between now and 2030.

As a result, billions of dollars have been poured into this scheme, and countless projects have been initiated to enable tropical countries to receive money in exchange of them reducing their deforestation rates.

Norway, for instance, has invested about $2.8 billion into the program in the past decade, more than any other wealthy nation.

On the other side of the equation, Brazil in particular has been lauded as a champion in REDD+ as it managed to slow down its deforestation rate nearly 80 per cent in 10 years between 2004 and 2014.

This week, representatives from these countries are gathering to celebrate the 10thanniversary of REDD+ at the Oslo Tropical Forest Forum in Norway.

Vast areas continued to be cleared for soy, beef, palm oil and other globally traded commodities.  Much of this clearing is illegal and linked to corruption.

But instead of being celebrated for their achievement, these countries are in the hot seat as the conference came on the heel of new data from the University of Maryland (UMD) showing how tropical tree cover loss in many countries has been ramping up in recent years, including in Brazil.

According to the data, tropical countries lost 158,000 square kilometers (39 million acres) of tree cover in 2017—an area about the size of Bangladesh. The 2017 number is the second highest since UMD collecting data in 2001, and only a bit lower than the record high in 2016.

Frances Seymour, a senior fellow at the US-based think-tank World Resources Institute (WRI), who also serves as the program committee chair for the Forum, said that the conference provides a moment for reflection on what’s going wrong with REDD+ in these countries.

“It’s a really good opportunity to celebrate all of the many real achievements that have taken place, as well as take stock of where we are, and see the road ahead,” she said during the opening of the forum in Oslo on Wednesday. “But it’s also important that we pause and reflect for what we haven’t achieved.”

Seymour then proceeded to cite the new set of data, published on Global Forest Watch, a forest monitoring site run by WRI.

“The 2017 tree cover loss numbers, which were released today by my colleagues at Global Forest Watch are not encouraging. 2017 is only slightly better than 2016, and that was a record bad year,” she said. “So you have to pause for a minute and think are we doing something wrong? I think we need to open to that possibility over the next two days.”

Commenting on the recent deforestation trend in the tropics, Norway minister of climate and environment Ola Elvestuen said during the opening of the Forum it is “a crisis of existential proportions,” and reminded participants that “We either deal with it or we leave future generations and planet in ecological collapse.”

Seymour and Elvestuen’s opening speeches set the tone for the rest of the forum, where government officials, activists, researchers and indigenous communities will discuss why REDD+ doesn’t seem to be working as well as hoped after 10 years despite initial progress made in countries like Brazil.

Seymour said just because tree cover loss rate is on the rise, it doesn’t mean that there’s no effort to save intact forests.

“In fact, we implement a number of strategies to address this problem, including offering climate finance, to the Paris Agreement to reward reduced forest emissions,” she said. “We’re getting companies to stop buying products grown on recently deforested lands. We’re cracking down on illegal logging and securing indigenous rights.”

But she said these efforts pale in comparison to pressure from the agriculture sector, which is often supported by mainstream policies and financing and which is considered the leading single cause of deforestation worldwide. 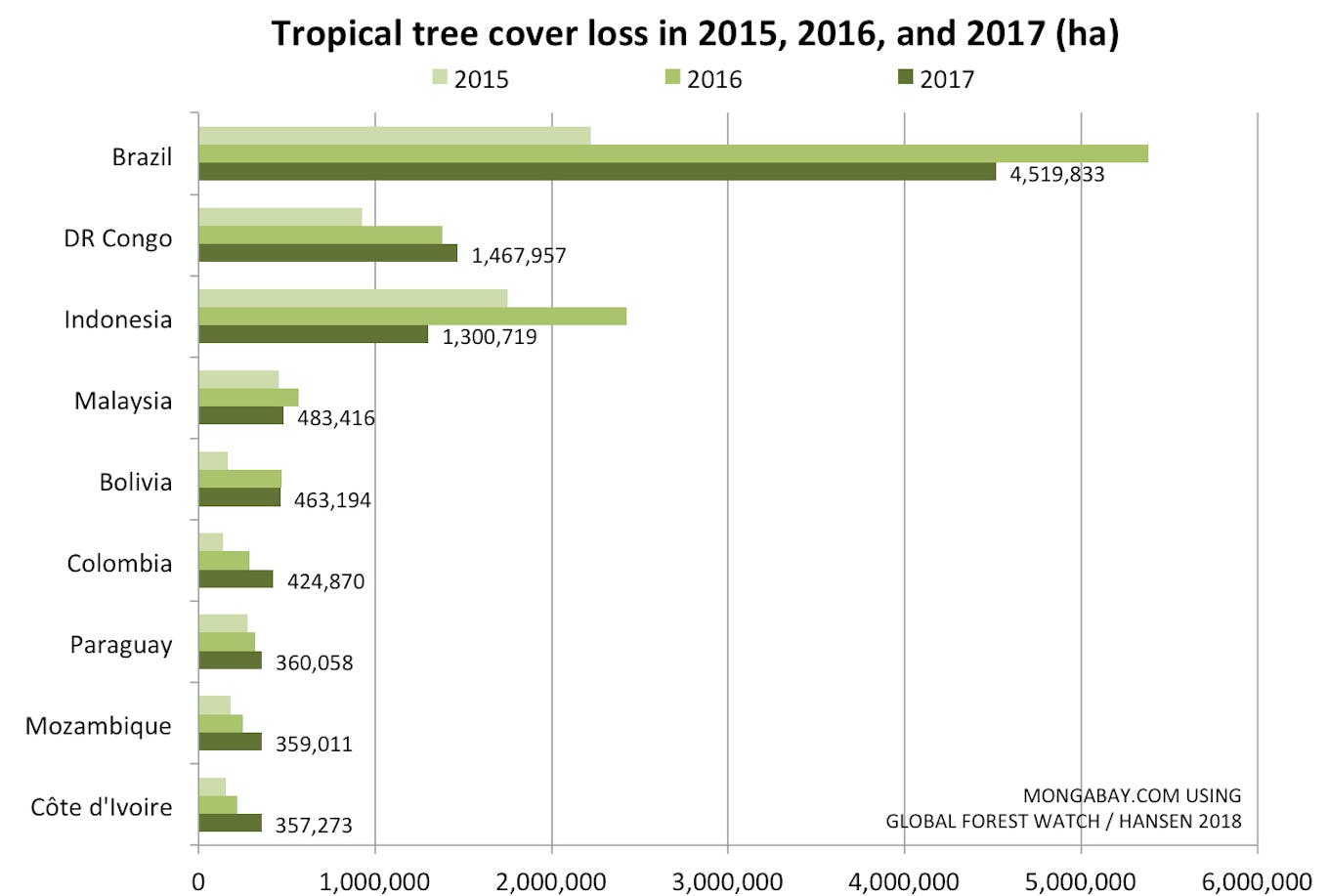 A breakdown of the new UMD data shows Brazil experienced by far the most tree cover loss in 2017. Indonesia, while currently in the top three, nearly halved its tree cover loss between 2016 and 2017.

According to Seymour, the amount of climate financing committed for forest conservation has averaged about a billion dollar a year over the last decade, while the amount of funding being poured into agriculture and other investments is 100 times greater.

“As long as mainstream policies and finance continue to support deforestation as usual, we’re trying to put out a house fire with a teaspoon, even while more gas are being poured on the flames,” she said.

“There’s really no mystery to the main reason why we’re seeing tropical forests disappear,” she said. “Vast areas continued to be cleared for soy, beef, palm oil and other globally traded commodities.  Much of this clearing is illegal and linked to corruption.”

Seymour also cited lack of protection for environmental activists and indigenous communities as one of the reasons why forest conservation seemed to be failing.

“Forest defenders continued to be murdered when they work to protect forests,” she said. “Most indigenous people still don’t have secured land rights, even though their territories have the lowest rate of deforestation.”

Lastly, she said that other factors such as natural disasters like fires are also playing an increasing role in tree cover loss as climate change makes such events more frequent and severe. Adding to this is political and economic instability that could shift government focus away from conservation, like what’s happening in Brazil.

The case of Brazil

In the early 2000s, Brazil’s deforestation rates started to decline. However, its tree cover loss began to spike upward in recent years, and in 2017 Brazil experienced its second-highest rate of tree cover loss, losing 45,000 square kilometers of tree cover.

According to Mikaela Weisse, a research analyst at WRI, much of Brazil’s tree cover loss can be attributed to a strong fire season in the Amazon, with the region having more fires in 2017 than any year since recording began in 1999. 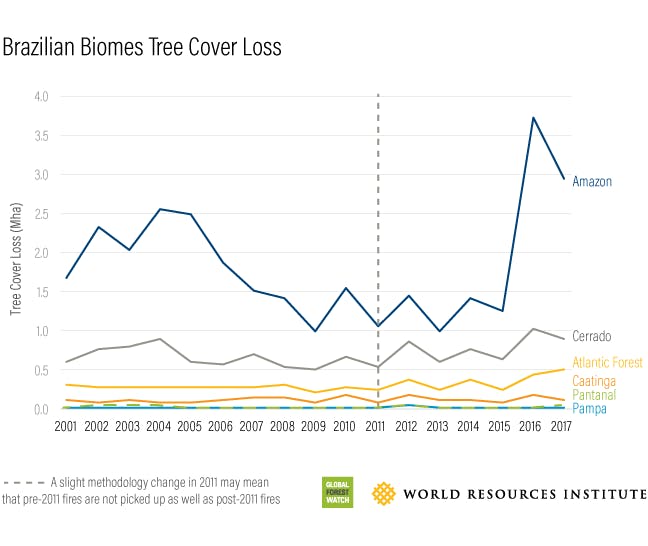 The UMD data indicate fires caused 31 per cent of the South American country’s tree cover loss. The university was able to come up with the figure as it recently added a new function that enables researchers to distinguish tree cover loss due to fires.

Weisse said that the fires in the Amazon are mostly caused by humans who clear land using fires as they take advantage of the lack of enforcement on prohibitions of fires and deforestation, political and economic uncertainty, and the current administration’s roll-back of environmental protections.

“As climate change and human land use interact to make forests more vulnerable to fire, many are concerned that extensive fires will become the new normal in the Brazilian Amazon,” Weisse said during a teleconference last week.

She also pointed out that the blazes are likely to cancel out the climate impact of reduced deforestation in Brazil.

Therefore, analysts believe that tackling forest fires not only in the Amazon, but also in other parts of the world, is crucial.

Carlos Nobre, Brazil’s leading climatologist, said during the forum that if no action is taken to address this issue, then Brazil is at risk of going over the tipping point where so many of its forests have been burned and turned into savannas.