How can China tame waste and emissions from e-commerce and freight?

E-commerce in China is set to eclipse that of the United States, United Kingdom, Japan, Germany and France combined, but it is generating a massive amount of packaging waste and air pollution. Industry players say solutions are in sight.

China is ground zero of the e-commerce boom, which is creating a growing mountain of waste and fuelling carbon emissions worldwide.

Already the planet’s largest carbon emitter, China’s online retail market is set to hit US$1.99 trillion by the end of this year and, by 2020, will eclipse the e-commerce markets of the United States, United Kingdom, Japan, Germany and France combined.

So, when industry players gather to discuss ways to cut e-commerce’s environmental impact in the world’s most populous country, solutions at scale are a given.

E-commerce, which has made life more convenient for urbanites, is here to stay, speakers at last month’s China Sustainability Conference in Beijing, agreed.

The conference, the first of its kind held jointly by the British Chamber of Commerce and Australia Chamber of Commerce, brought together business leaders, policy advisors and journalists to discuss some of China’s topline sustainability issues.

But delivery packaging is accounting for 93 per cent of solid waste growth in China’s megacities, according to Maxime van’t Klooster, general manager at Beijing-based management consultancy 1421.

And while delivery trucks make up less than 10 per cent of all automotives in China, they are contributing to more than three quarters of harmful particulate matter released into the atmosphere, said Wang Boyong, strategic partnerships director of Smart Freight Centre, a non-profit.

As companies face greater pressure to disclose the environmental footprint of their operations, waste and pollution are quickly becoming problems that they can no longer ignore.

Greening every mile in China’s freight

As freight volume continues to grow, more needs to be done to make China’s transport system more productive and efficient.

Smart Freight Centre estimates China would need to reduce its carbon-dioxide emissions by at least 50 per cent by 2050 to keep to a 2°C temperature rise scenario set out by the Intergovernmental Panel on Climate Change. (See graph below)

This requires consolidation of a highly fragmented freight system. “There are over 13 million trucks on the road in China, 90 per cent of which are still owned by individual drivers who are unlikely to invest in better technologies. Compared to counterparts in the US and Germany, Chinese trucks are also more likely to be running empty (not carrying goods),” said Wang. 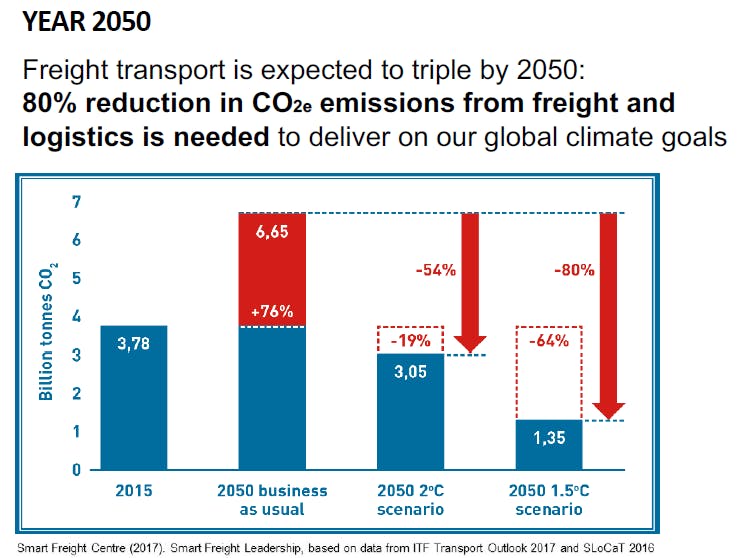 For instance, Meituan-Dianping, one of China’s leading delivery companies, digitised its dispatch system using machine learning and almost doubled the efficiency of its service.

Cainiao, the logistics affiliate of e-commerce giant Alibaba, has also announced its “most comprehensive green campaign in China’s logistics industry to date”. Its plan is to use artificial intelligence and algorithms to enhance material recycling, packaging, route planning and delivery methods by 2020.

Greater optimisation of road, rail and air transportation is needed to reap the benefits of China’s strong logistics infrastructure, Smart Freight Centre noted in its summary report on a forum on efficient and green urban freight held earlier this year.

These include adopting shared supply chain logistics service providers, and making use of industry associations and other key players to coordinate efforts of cargo owners.

China’s infrastructure is second to none. But its logistics is highly inefficient when you factor in the cost of congestion and emissions.

China’s dramatic top-down move to combat trash kicked off in the commercial capital of Shanghai in July this year. The city of 23 million people became the first of 46 cities in China to legislate personal waste conduct. Overnight, residents have had to learn to sort their waste into four specific categories, or face fines.

Although harsh, the law takes Shanghai closer to its 2020 goal of zero waste to landfill.

Nationwide however, all eyes are China’s upcoming Five-Year Plan. The 14th iteration, which will lay the blueprint for China’s top-level policies from 2021-2025, is expected to have a stronger alignment with sustainability. Whether these translate into directives targeting China’s e-commerce sector remains to be seen.

A regulation specific to China’s Courier, Express and Parcel industry was released in 2018, stating that companies should use degradable and reusable environmentally friendly packaging materials. The regulation is short on specific targets, but is “an important step”, Klooster said.

The business of responsible consumption

In a country where 80 per cent of waste goes to landfill, perhaps the most effective way to reduce greenhouse gas emissions and over-flowing dumping grounds isn’t so much to clean it up, as it is to address the problem at source—curb the over-buying.

In a Greenpeace investigation in 2017, 60 per cent of Chinese consumers admit buying products they do not need. More televisions, refrigerators, air conditioners, washing machines and computers are thrown away in China than in any other country.

The “shark feeding frenzy” on the Singles Day (Nov 11) each year, the amount of personal data unknowingly disclosed and the high rates of unwanted items purchased—as reported by Eco-Business in its e-commerce special report—show how e-commerce firms have fallen short in their social responsibilities toward consumers, particularly low-income earners.

But firms are beginning to tap opportunities to make technology work harder for customers who want less wasteful options. Alibaba’s rival, JD.Com, works with partner retailers and delivery companies to give customers the option of returning boxes for re-use or recycling. More of its sourced products, such as seafood, are also coming from certified responsible sources.

Institutional investors, which are increasingly open about their investment criteria including negative externalities such as waste and pollution factors, could also steer the sector towards sustainability.

Global ratings such as the Dow Jones Sustainability Index (DJSI) currently evaluate retail companies based their public disclosure around operational efficiencies, including responsibilities taken toward packaging and disposal.

While no Chinese retail company is currently on the index, JD.Com recently announced plans to be the first Chinese logistics group to release comprehensive carbon emission targets from its operations through the Science-Based Targets initiative (SBTi).

“The road ahead (to green China’s e-commerce) is still long. There are still lots of decisions to be made and encouragement needed, but this would really snowball if individual consumers in China and businesses are equally engaged,” said Klooster.