Three months after Greenpeace suspended work with Asia Pulp and Paper over the death of a farmer, the green group has said it is satisfied with how APP has dealt with the matter and has agreed to work with them again.

Three months after Indonesian farmer Indra Pelani was allegedly killed in a confrontation with security guards of a pulpwood company supplying agribusiness Asia Pulp and Paper (APP), environmental group Greenpeace is satisfied enough with APP’s response to the incident to resume working with them on conservation efforts.

The group’s announcement, made on Wednesday through an open letter to APP’s chairman Teguh Ganda Wijaya, is a reversal of a decision by Greenpeace on March 2 to suspend its collaboration with APP on implementing its Forest Conservation Policy (FCP).

This is a four-pronged commitment by the company to environmentally and socially responsible business operations. Under the FCP, APP and its suppliers pledge to avoid development on forest land, protect peatland, avoid and resolve social conflicts, and ensure that all the fibre entering its mills is sustainably sourced. 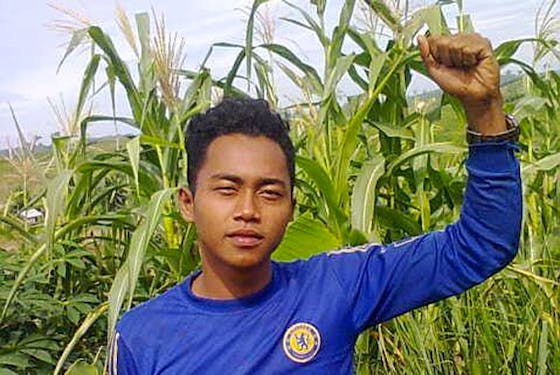 Indra Pelani, a 23-year old activist who was allegedly beaten to death by security guards hired by an APP subsidiary. Image: Walhi

Pelani, a 23-year old farmer and land rights activist, was allegedly beaten to death on February 27 by security guards hired by APP supplier PT Wira Karya Sakti (PT WKS). He reportedly encountered the guards on his way to a rice harvest festival with a friend, and an ensuing argument ended with officers beating Pelani to death.

Immediately after the incident, APP said it was cooperating with police on their investigation, and had suspended operations in the area surrounding Pelani’s village, Lubuk Mandarsah. It also cut off ties with the security company hired by PT WKS.

APP and WKS have responded quickly and decisively to Indra Pelani’s death.

Subsequent efforts included training PT WKS staff and new security officers on the importance of non-violence, respecting human rights and community engagement, as well as working with the Indonesian National Commission on Human Rights to resolve the issue.

APP and WKS in April also announced a plan to resume operations in the area around Pelani’s village in the near future, but only after a prayer and traditional ceremony had been held in accordance with the village community’s wishes.

The company had also paid a traditional fine to the community, provided a cash payment to Pelani’s family, and promised to support his younger sister’s education to university level, according to Greenpeace’s letter.

Bustar Maitar, Greenpeace International’s Indonesia forest campaign head who wrote the letter, said that while these steps were certainly not a substitute for ongoing legal proceedings, they showed a commitment by APP, WKS and the village to seek amicable and meaningful solutions to the land conflict.

These actions assured Greenpeace that “APP and WKS have responded quickly and decisively to Indra Pelani’s death”, he added.

However, Maitar noted that “APP has to do much more to reduce the possibility of such conflicts and violence occurring at APP’s operations elsewhere in Indonesia”. The group should carry out a company-wide security review and address broader issues such as land disputes, illegal logging by third parties, and deeper cooperation with local communities on forest conservation, he said.

APP “warmly welcomed” Greenpeace’s decision to re-engage with it, and agreed with the recommendations to review its security arrangements and address outstanding social and community issues.

Aida Greenbury, managing director of sustainability and stakeholder engagement, APP, said in a statement that Greenpeace had been a “vital partner and valued critical friend” in delivering the company’s Forest Conservation Policy, which the company introduced in 2013.

“We were all deeply affected by the WKS Jambi incident, and intend to learn everything possible from the event so such a tragedy is not repeated,” she added.

The two organisations will resume their work on an implementation plan for the FCP for 2015 and beyond, as well as initiatives to protect peatlands, address deforestation by third parties, and restore forest and peat landscapes beyond APP concessions in Indonesia.

“We look forward to your continued leadership with these initiatives to work towards zero deforestation in Indonesia within and beyond your supply chains,” Maitar told APP’s chairman.

He hoped APP would use its influence not only to fulfil its own commitments, “but also to push for broader political and industry change within Indonesia”.