For sustainable growth, Philippines must look beyond Manila

The Philippine government is spending big on infrastructure to ease problems such as congestion and flood control, but experts note that the country needs to explore growth opportunities outside Metro Manila.

Exhausting, long commutes; bumper-to-bumper traffic; and choking pollution: This is the not-so-new normal for the working class in Metro Manila.

But this may soon change, thanks to rising investment by the government of the Philippines into an ambitious infrastructure program which will entail spending between US$160 and US$180 billion on projects such as national roads, railways, ports, healthcare facilities, school buildings, and agricultural works in the next six years.

The government’s efforts are expected to ease not just traffic congestion, but also other issues such as sewerage system problems, flood control, waste management and road safety.

In an update of its annual economic report, the Asian Development Bank (ADB) said that this massive public spending on infrastructure will cause the Philippines to surpass earlier growth forecasts. Last April, the ADB gave a  GDP growth rate forecast of 6.4 per cent for this year, but this has now modestly risen to 6.5 per cent. GDP growth in 2018 will accelerate to 6.7 per cent through increased public investment and household consumption.

The Philippines has a lot of potential headroom outside Metro Manila.

Speaking on the sidelines of a press conference last September 26, 2017 about the Asian Development Outlook for 2017, Joven Balbosa, principal country specialist for the Philippines, said that although infrastructure is part of the country’s growth strategy, it must also pay attention to, and support the growth of other cities in the country to achieve sustainable growth.

“Our country strategy focuses on regional development,” said Balbosa, adding that this will be done in two ways.

There is also the social aspect, which entails reaching out to high poverty areas and providing them with connectivity, Balbosa told Eco-Business at the ADB headquarters.

The concept of “cities” no longer refers to an area just at the local government level, explained Balbosa. Rather, the notion of a city is now moving towards a “city inter-local government” or metro-level as it builds up to larger business districts.

“That’s why the Philippines has a lot of potential headroom outside Metro Manila,” he said. 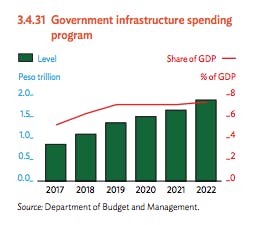 In ADB’s planning with the government, Balbosa said they were looking at provinces like Iloilo, Davao, Cagayan de Oro, Cebu, Bohol, and Clark in Pampanga to contribute more to the country’s future growth.

He cited Iloilo, a city in the center of the archipelago, as a place that exemplifies how environment and flood management issues can be addressed.

The city conducted a rehabilitation programme for the Iloilo River five years ago, which included the relocation of illegal settlers along the river and the development of the area to be a recreational space for walking, jogging, open-air dining and venue for river water sports.

Apart from infrastructure, the ADB is also pushing to fast-track the government’s comprehensive tax reforms measures, which are also seen as an important step to realise the ambitious public infrastructure programs.

“We are fortunate that the Philippines is composed of islands, but yet there are large enough (potential) in some regions that you can really develop an ecosystem of good economic activities that are linked to each other,” he said.