Coronavirus has temporarily reduced China’s CO2 emissions by a quarter

Initial analysis suggests the repercussions of the outbreak could shave up to half a per cent off global oil demand in January to September this year, but the Chinese government’s measures in response to the disruption could outweigh these shorter-term impacts on energy and emissions.

As China battles one of the most serious virus epidemics of the century, the impacts on the country’s energy demand and emissions are only beginning to be felt.

Electricity demand and industrial output remain far below their usual levels across a range of indicators, many of which are at their lowest two-week average in several years. These include:

All told, the measures to contain coronavirus have resulted in reductions of 15 per cent to 40 per cent in output across key industrial sectors. This is likely to have wiped out a quarter or more of the country’s CO2 emissions over the past two weeks, the period when activity would normally have resumed after the Chinese new-year holiday. (See methodology below.)

Over the same period in 2019, China released around 400m tonnes of CO2 (MtCO2), meaning the virus could have cut global emissions by 100MtCO2 to date. The key question is whether the impacts are sustained, or if they will be offset – or even reversed – by the government response to the crisis.

Initial analysis from the International Energy Agency (IEA) and Organization of the Petroleum Exporting Countries (OPEC) suggests the repercussions of the outbreak could shave up to half a per cent off global oil demand in January-September this year.

However, the Chinese government’s coming stimulus measures in response to the disruption could outweigh these shorter-term impacts on energy and emissions, as it did after the global financial crisis and the 2015 domestic economic downturn.

A country in shutdown

Every winter, during Chinese new year, the country closes down for a week, with shops and construction sites closing and most industries winding down operations. The holiday has a significant short-term impact on energy demand, industrial output and emissions.

The blue lines on the chart below show how coal-fired power generation typically drops by an average of 50 per cent in the 10 days following the eve of Chinese new year, marked as zero on the x-axis.

This year, shown in red, the usual fall in energy use has been prolonged by 10 days so far, with no sign of rebound. This is because the annual holiday was extended to give the government more time to get the epidemic under control – and demand has remained subdued, even after the official resumption of work on 10 February. 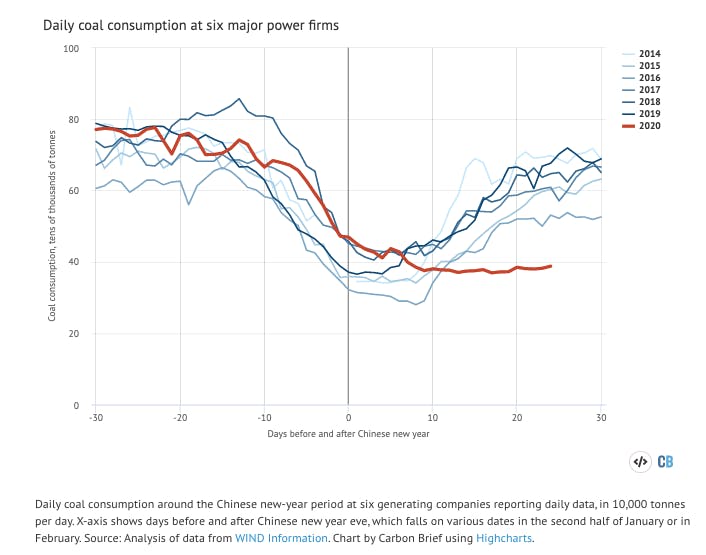 In the two-week period commencing 3 February this year, average coal consumption at power plants reporting daily data fell to a four-year low, with no sign of recovery in the most recent data, covering Sunday 16 February.

The short-term effect has been equally dramatic across a range of other industrial indicators, shown as 14-day averages in the figure below. The top left chart shows coal throughput at the main coal port, Qinhuangdao, which fell to the lowest level in four years in the two weeks to 16 February. 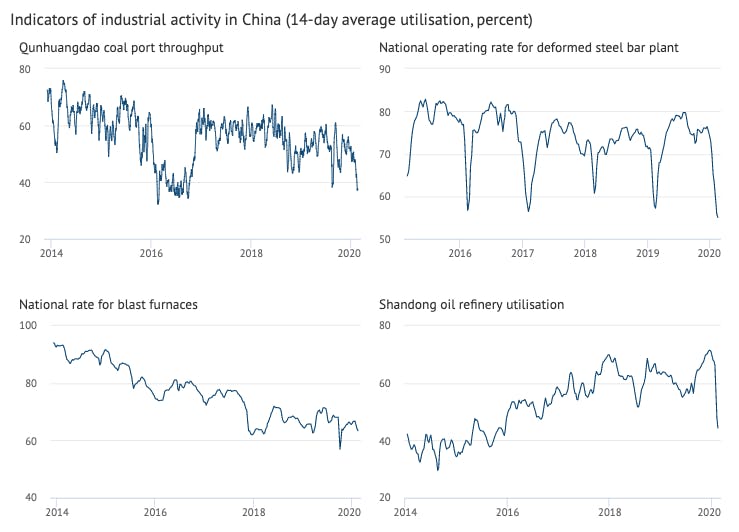 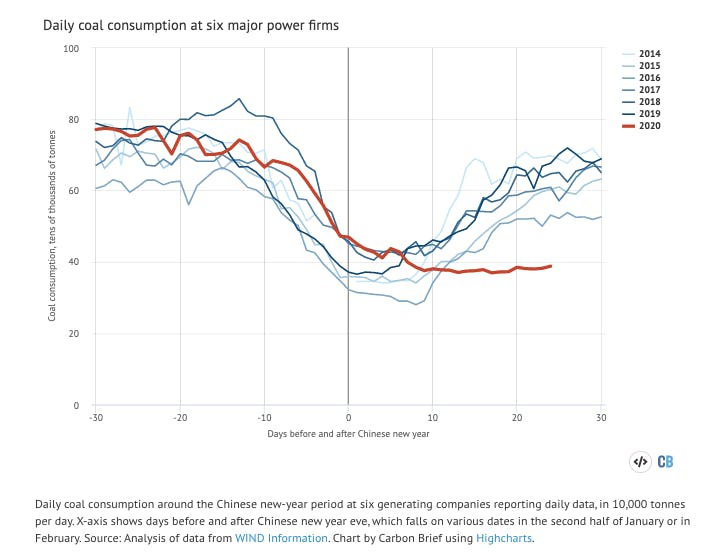 Taken together, the reductions in coal and crude oil use indicate a reduction in CO2 emissions of 25 per cent or more, compared with the same two-week period following the Chinese new year holiday in 2019. This amounts to approximately 100MtCO2 – or 6 per cent of global emissions over the same period.

One exception to the wider downturn has been primary steel production, which kept running through new year and the extended holiday. In contrast, production of the main steel products – a closer proxy of demand – is down a quarter, hitting the lowest 14-day level in five years. Unless demand rebounds fast, blast furnaces will have to shut down as well given limited capacity to hold stocks and a souring demand outlook.

There is further confirmation of the reduction in fossil-fuel use in satellite measurements of NO2, an air pollutant closely associated with fossil-fuel burning. In the week after the 2020 Chinese new year holiday, average levels were 36 per cent lower over China than in the same period in  2019, illustrated in the right-hand panels below. 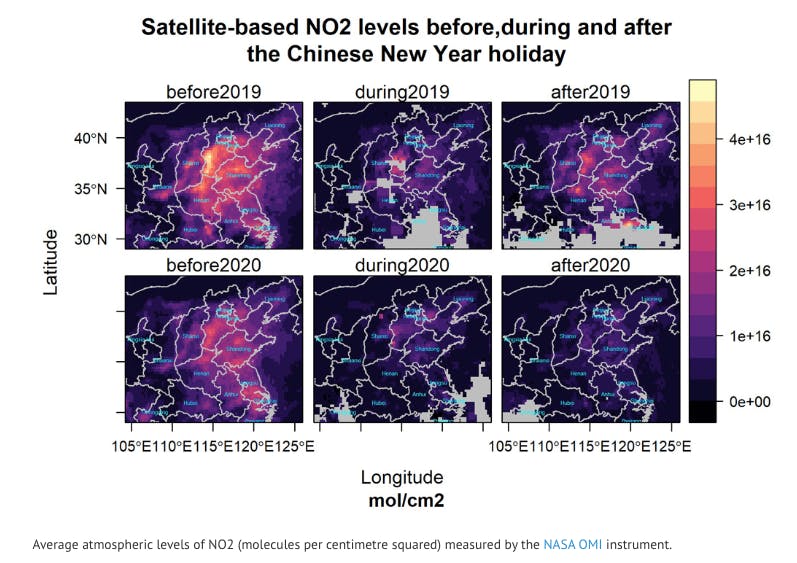 Although the short-term impact of the current crisis is large, in terms of reduced energy demand and industrial emissions, the longer-term direct effect of factory closures could be much more limited.

Apart from the annual Chinese new year holiday, shutdowns of a week or more are not uncommon in China.

Moreover, shaving 25 per cent off energy consumption and emissions for two weeks would only reduce annual figures by around one percent. China also has very substantial overcapacity in all of the major CO2 emitting industries, meaning production volumes – and emissions – can catch up rapidly after a shutdown, if the demand is there.

Any sustained impact on fossil-fuel use would come from reduced demand, which initial indicators suggest could have a major impact. For example, February car sales are forecast to fall by 30 per cent below last year’s already depressed levels.

If consumer demand is reduced – for example, due to unpaid wages during the crisis cascading through the rest of the economy – then industrial output and fossil-fuel use might not recover, even though capacity is available to do so.

Some analysts have pointed to images of empty cities and cellphone factories as evidence for such an effect, although this might give an exaggerated idea of the impact. China’s energy consumption is heavily dominated by energy-intensive industries and freight, with residential and commercial electricity consumption, private cars and so on playing a relatively minor role.

This is illustrated by the fact that Beijing experienced its second severe smog episode of the year last week, leaving many wondering where the pollution was coming from when most cars were off the road and most businesses were shut. As already noted above, steel blast furnaces in particular kept running throughout the extended holiday, while most power plants only shut a part of their boilers, at most.

Instead, the single most important question on the demand side is the effect of the coronavirus outbreak on construction activity. The sector relies on migrant workers who might still be affected by restrictions on movement, enforced home quarantine and other measures for days or weeks, so resumption of operations is not straightforward.

The key factor determining the size of this impact is how fast things return to normal.

Currently, Beijing is urging local governments to focus on getting the economy back on its feet. Chairman Xi himself has reportedly said that the coronavirus response outside the epicentre of the outbreak in Hubei province has gone too far, warning of damage to the economy and cautioning against more restrictive measures.

However, local governments continue to maintain and even tighten controls on movement and are encouraging businesses to stay shut. This suggests they are more worried about getting blamed for a new outbreak than about keeping the economy on ice for a few extra days or weeks.

Beyond the disruptions caused by the measures to combat the virus on construction sites, apartment sales are certain to be affected for weeks, if not months, due to restrictions on movement. Lowered income is likely to prompt builders to slow down and refrain from starting new projects. If financial distress results in disruption to operations, the effect could be more profound and sustained.

The potential for wider financial disruption is clear as firms, local governments – and increasingly households – have high levels of debt. Lack of cashflow during the extended shutdown is likely to make some debt unserviceable, with the country’s leading financial media Caixin calling the virus “an existential threat” to small businesses. The issue is compounded by the widespread practice of firms taking on very short-term debt to finance long-term spending.

The leadership in Beijing appears keenly aware of the financial risks. It has been calling on banks to roll over loans and local governments to cut rents and other costs for firms, as well as on brokerages to hold or buy stocks to keep share prices from tanking.

Beyond the immediate interventions to avoid financial disruption, a forceful economic policy response is shaping up.

The background to this is that 2020 was to be the showcase year for China’s economic accomplishments, marking the achievement of the goal of “building a moderately prosperous society”, set a decade ago. Significantly lower GDP growth rates for the year would hardly fit the script.

The basic formula of Chinese economic policymaking is to take the projected growth in private consumption and net exports, and subtract them from the GDP growth target. The residual is the amount of debt-driven investment spending that is needed to hit the target.

Of these three GDP components, investment is by far the most CO2-intensive, due to the energy used to make steel, cement, non-ferrous metals, glass and other basic construction materials. If the central government were to make up for a worse outlook on consumption and exports, then it could result in an increase in CO2 emissions overall.

There are already signs this could happen, with the Politburo calling recently for “active” stimulus, including speeding up large construction projects and increasing both bank lending and government spending.

A return to debt-fuelled stimulus spending runs counter to the government’s aim of rebalancing the economy towards consumption. Relaxing the GDP growth target for the year would give more space to reconcile the different objectives, but Xi has signalled that the country should stick to its targets “as of now”.

The GDP growth target for 2020 will be officially set in the annual session of the National People’s Congress, which normally takes place at the start of March, but appears likely to be delayed due to the virus outbreak.

Another major uncertainty is that the initial statements about stimulus gave no indication of which sectors or what type of expenditure should be targeted. Targeting clean energy and energy efficiency investments would be a natural way to reconcile the perceived need to prop up economic growth with state-engineered spending and China’s stated ambition to be a contributor to the fight against climate change.

The clean-energy sector is currently running well below capacity as investment in non-fossil energy sources and in electric vehicles slowed in 2019.

The estimated CO2 reduction is based on fossil-fuel consumption data by sector and fuel for February 2019, and estimating year-on-year changes using sector activity indicators: daily coal consumption at power plants; coking plant; blast furnace and steel plant operating rates; and oil refinery operating rates. Residential fuel use is assumed to be unaffected. The estimate aligns with satellite-based NO2 levels, which point to the possibility of an even larger reduction.