Four out of the top ten most high-risk locations to extreme weather are in China, a new report by the United Nations Environment Finance Initiative has found.

Delaying the implementation of climate policies could cost the world’s top companies US$1.2 trillion over the next 15 years, according to a report on how global warming could impact investor portfolios globally.

In Asia, extreme heat and coastal flooding are the main weather hazards that will impact businesses based on a sample of 30,000 of the largest listed companies surveyed by the United Nations Environment Finance Initiative (UNEP FI).

Increasing levels of heat will affect energy company facilities found in four locations in eastern China, with expenses running up to US$219 million, while the production facility of one of the top oil companies in Indonesia is exposed to flooding risk, which could lead to costs of US$125 million for one location alone.

Climate change is posing a significant threat across many sectors and regions, and businesses must play a key role in ensuring transparency around climate-related risks and opportunities.

The UNEP FI project brought together twenty of the world’s largest investors to create a report that will serve as a guide for companies to be more transparent about climate-related risk.

The pilot study suggested that the longer companies delay decarbonisation to help cap a global temperatures rise at 2 degrees Celsius, the higher the costs will be.

The report showed that even if countries can transition immediately to carbon neutrality, investors will be spending US$4.3 trillion on policy changes to respond to extreme weather, but will face a further loss of US$1.2 trillion for an overall cost of US$ 5.4 trillion if greenhouse gas emissions are not set on a downward path by 2020. 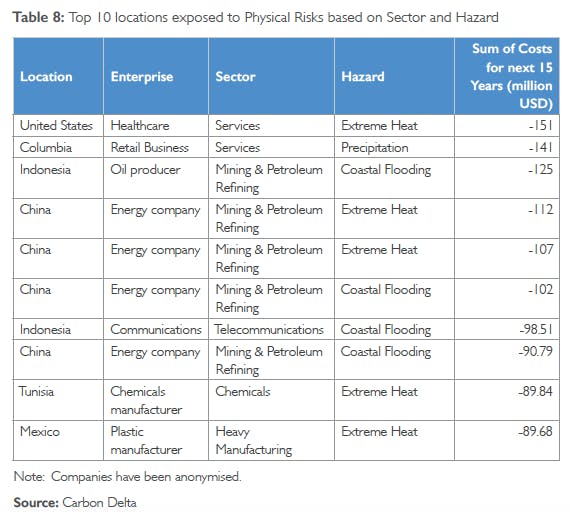 “Climate change is posing a significant threat across many sectors and regions, and businesses must play a key role in ensuring transparency around climate-related risks and opportunities,” said Sherman Kwek, chief executive officer of Singapore property giant City Developments Limited (CDL), which was one of the investors behind the study.

A case study in the report revealed that out of 1,200 companies with the highest market capitalisation in the world, three companies with facilities in Asia face the most physical risk of coastal flooding.

An Indonesian energy company is set to lose US$125 million if no policy action on greenhouse gas emissions is taken. Another energy company in Singapore risks US$51.87 million, while a Japanese company in the utilties services sector faces US$42.84 in costs. The identity of the companies was not disclosed in the report. 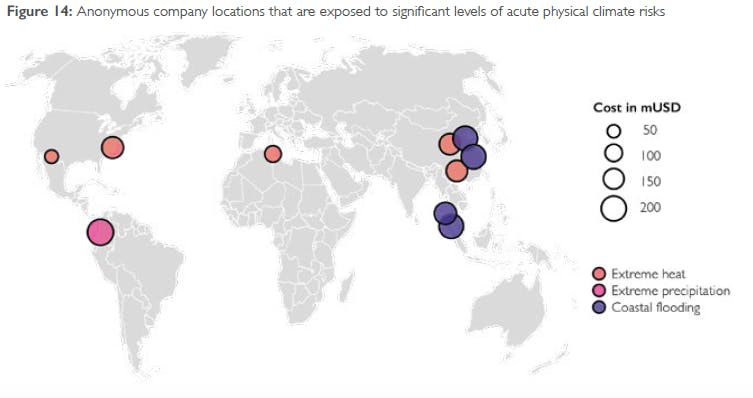 The top 10 locations around the world that are exposed to physical risks are found in the US, Indonesia, Singapore, Costa Rica, Brazil, Japan, and Mexico. Source: Carbon Delta.

The region’s climate risk was highlighted in the report when the asset manager arm of insurance company Manulife Financial Corporation drew attention to the greater risk of buying Asian stocks compared to Canadian investments.

Manulife Investment Management noted that the Asian portfolio could incur higher risk because it is exposed to more severe physical hazards, with 145 million people in China living on land threatened by rising seas.

The Canada-based firm added that investing in Asian assets may be riskier because the average carbon intensity of companies in the region is higher, due to a large consumption of coal—the single biggest source of greenhouse gas emissions—for energy production compared with Canada.

While it is possible for companies to protect themselves from financial loss through insurance, Manulife said, businesses will still be susceptible to a lower market value if they are not able to curb these risks.

The report read: “Those companies that are most proactive about mitigating climate risks are likely to become the most resilient. Regardless of the strategy adopted, establishing greater resiliency to climate change will be a significant task for executives and corporate boards of directors.”