China is drafting its next Five Year Plan, and the president of Energy Foundation China wants to see ambitious energy and climate goals.

China’s 14th Five Year Plan will guide its development from 2021 to 2025, shaping the economy, energy mix and carbon emissions and much else beside.

But the impact of the coronavirus has introduced great uncertainty to the process. At the recently concluded meeting of the legislature, the Twin Sessions, China announced it would not set a new goal for economic growth during 2020, reflecting how those uncertainties are affecting top-level planning.

The economic slowdown caused by the virus is also causing concern over China’s commitment to a low-carbon green transition. Will China again rely on carbon-intensive infrastructure construction to stimulate the economy as it did in 2008?

Figures from Greenpeace show many Chinese provinces restarted coal-fired power construction in the first five months of this year, with 48GW of generation capacity newly planned, approved or under construction – more than went into operation in all of 2019.

This complex economic and energy outlook makes the 14th Five Year Plan (FYP) even more important. On the existing timetable, the grand plan will be unveiled at next year’s meeting of the Twin Sessions in March 2021, along with specific plans for key sectors such as energy.

With drafts of the plans likely to appear later this year, China Dialogue sought the view of Zou Ji, president of Energy Foundation China. He describes the coronavirus epidemic as also offering opportunities for reform – opportunities which China should seize by setting more ambitious climate and environmental targets than those of the last Five Year Plan.

China Dialogue: This is the final year of the 13th FYP. What do you think of China’s progress on its low-carbon transition over these five years?

China has made considerable progress. First, we overshot the [energy and climate] targets set. Second, the market price of renewable energy has consistently fallen – due both to better technology and larger market scale. These are real improvements.

Similarly, there has been significant improvement on energy efficiency. Energy intensity per GDP unit and per tonne of steel, cement and ethylene produced has fallen. The structure of our economy is changing, with the share of the service sector and of new low-carbon manufacturing industries on the rise, and that of traditional polluting and energy-hungry industries falling.

Coal consumption has been falling since reaching a peak in 2013; there was a slight upturn in 2018 and 2019, but consumption remained below 2013 levels. Looking to the long term, coal has lost its momentum, allowing for a low-carbon and cleaner energy structure. And while total carbon emissions increased during the 13th FYP period, growth is slowing, indicating that the Chinese economy is uncoupling from carbon and emissions are moving towards a peak. 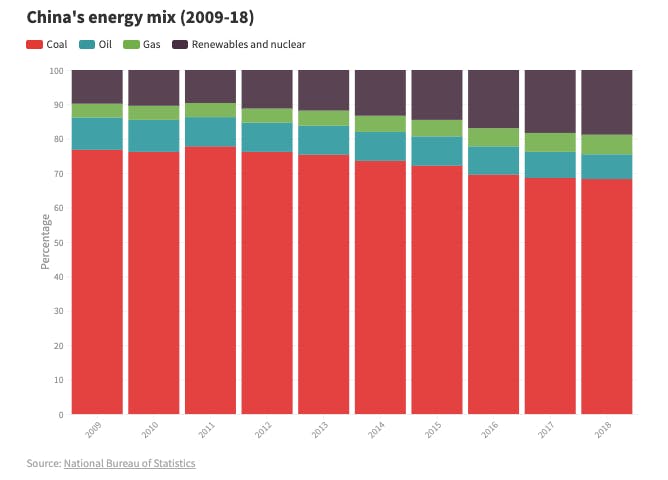 Do you think energy and climate targets for the 14th FYP should be as strong as those of the 13th FYP?

I think so, I think the potential is there. If we don’t, there’ll be no drive to transform our energy mix, no strong sense of direction for investment. High-carbon investments at this point would lock in emissions, and the costs of those assets becoming stranded would be huge. A failure to do so would also slow advances in R&D, with other countries benefiting from the increased competitiveness that those bring. For example, the European Green Deal would see the EU increase R&D investment. If they’re moving faster, we too need a sense of urgency.

We suggest the below targets for the 14th FYP. These are very early suggestions, which will need to be adjusted. But overall we hope to see similar levels of ambition – if not more. 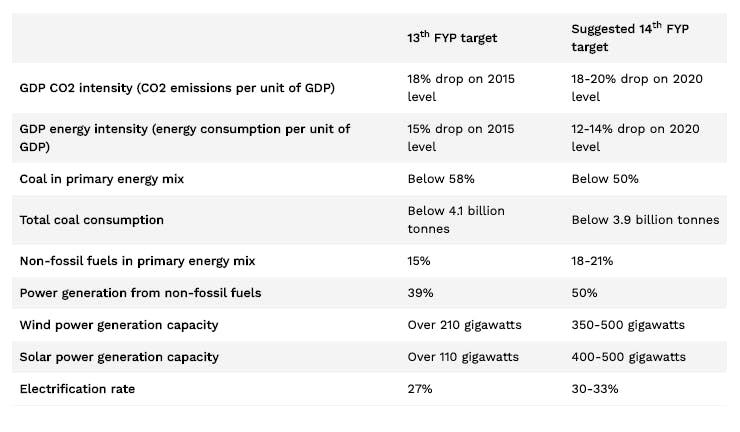 What new energy and climate targets do you think the 14th FYP should include?

I think there should be a cap on CO2 emissions. I suggest an advisory target at first, of reaching peak carbon by the end of the 14th FYP – 2024 or 2025, with total emissions not to exceed 10-10.3 billion tonnes per year.

In the Paris Agreement we committed to achieving peak carbon by 2030. Regardless of how high that peak will be, and whether or not we get there early, if we’re going to do that we need to set targets and start the process now. At the national level, we need to produce an emissions inventory – where are our emissions coming from? What are the individual sources? We need to get that clear before moving on to the next stage of gathering statistics.

And that won’t be easy either – China has tens of thousands of companies emitting carbon dioxide, accounting for 70-80 per cent of total emissions. We need to train specialists to measure, monitor, report and audit these emissions. Getting this system up and running stably and reliably will take three to five years, and it’s going to be complicated. But it’s essential for meeting our goal. So the 14th FYP is by no means too early to set and work towards a carbon emissions cap.

If that doesn’t happen, we won’t have the necessary capacities in time. If we wait for the 15th FYP, in 2026, to worry about a 2030 carbon peak, we’ll find we don’t have the data and won’t be able to actively manage the process. So I think we need to set a carbon cap target now and spend the next three to five years developing the mechanisms to achieve it, if our efforts are to be successful.

Given the coronavirus epidemic and the continuing economic slowdown, China urgently needs an economic stimulus package. But a stimulus based on transportation and infrastructure may hamper the country’s transition to sustainability. How should the 14th FYP balance economic targets with environmental and climate targets?

Government finances are under pressure, and levels of debt and leverage are high. But environmental benefits are public goods, which don’t bring direct financial benefits to local governments, businesses or residents. So what’s to be done?

We think we should set ambitious environmental targets, including on air quality and carbon emissions, and allocate targets for businesses and the public accordingly. That process of allocating targets is, in economic terms, a process of distributing the ownership of that public good.

Once emissions quotas have been allocated, make them tradeable, forming a carbon market. Trading of environmental [carbon] rights will allow price discovery, quotas will become an asset, and smart investors will invest in environmental [low carbon] assets.

Building coal to boost the economy is ‘drinking poison to ease thirst’.

If the market is regulated so as to ensure the cost of carbon rises consistently, reflecting the increasing scarcity of carbon assets, investors will anticipate those rises and invest in the low-carbon sector, while researchers will choose to work in this field.

We’re always talking about an energy transition, but the power sector is suggesting an upper limit of 1,300GW of coal-fired power capacity for the 14th FYP – higher than the 1,100GW limit of the 13th FYP. Restrictions on coal-fired power construction have also been loosened lately, with an increase in construction approvals. What’s your view?

Technological advances are removing the justifications for building new coal power. For example, people used to say some coal power was necessary to ensure supply on days with no sun or wind. But power storage technology has improved rapidly and coal power is no longer needed for this purpose.

Distributed renewables have also developed to the point that every community can become a power generator, producing and using its own power. This means fundamental change for China’s economy and energy sector – we no longer need so many railways and power grids to move coal and electricity around the country. There are cost benefits, environmental benefits, climate benefits, energy security benefits. It’s a long-term solution – so why not invest now?

With geopolitics becoming more complex, mobilising to develop distributed renewable power within a certain timeframe, and using that “green electricity” to drive electrified transport, would achieve the strategic goals of energy independence – freeing China from reliance on energy imports – and energy security. We should commit to achieving this energy transition over the coming two to three decades.

Many coal-fired power plants have been given the go-ahead lately in order to boost the economy. This is “drinking poison to ease thirst”. Those power plants will become nothing but scrap metal, a drag on our economic growth.