China can phase out coal power in line with Paris Agreement, report finds

Planned coal should be cancelled, inefficient plants should close, and the rest should reduce operating hours with government support.

China could achieve an orderly phase out of coal power consistent with the Paris Agreement goals and at a reasonable cost, according to a recent paper that’s sparked a debate on the country’s energy sector.

Researchers from the University of Maryland’s Centre for Global Sustainability studied over 1,000 Chinese power plants and have proposed a three-pronged strategy to manage the coal phase-out. This includes a halt to new coal plant constructions and the rapid shutdown of some of the oldest and most polluting plants. The third part of the strategy would provide a guaranteed lifetime to coal plants, helped by gradually shifting coal use to times of peak electricity demand only.

China has long relied on coal power, and some experts argue that economic and technical obstacles remain to a rapid and orderly exit.

A coal phase-out may be easier than thought

The report finds that the coal industry has overestimated the challenge of phasing out coal power. It says that China is capable of a coal phase-out compatible with the Paris Agreement targets to keep average global warming to no more than 1.5C and certainly within 2C.

The researchers calculated a retirement order for all of China’s coal power plants based on an assessment of their technical attributes, profitability and environmental impacts.

To meet the Paris targets, the report recommends that China halt the construction of new conventional coal plants. It also suggests cancelling coal plants under construction or in planning to make deep emissions cuts cheaper in future. This will avoid valuable assets becoming stranded and allow existing plants to be phased out at an appropriate pace.

The researchers identified 18 per cent of operating units as particularly suitable for early retirement due to poor technical, economic or environmental performance. These account for 112 gigawatts of generation capacity, approximately 10 per cent of China’s total coal power capacity. The units are located mostly in Shandong, Inner Mongolia, Henan, Hebei, Jiangxi and Shanxi provinces. A higher proportion, 23 per cent, of captive power plants (generation by industry that is unconnected to the power grid) are identified as priorities for retirement.

The report suggests that other coal plants should run for a maximum of 30 years to meet the 2C target, or 20 years to meet 1.5C, but at gradually reduced hours. This would reduce the risk of stranded assets and have no excessive impact on the economy.

The report has provoked controversy among industry figures and online, with many doubting the feasibility of phasing out coal so rapidly given its importance to electricity supply. Critical comments accumulated huge numbers of likes on Netease’s 163news.com platform.

Bai Rongchun, former deputy head of the National Development and Reform Commission’s (NDRC) National Energy Administration, said there is no doubt that coal power must be cleaned up but an immediate halt to plant construction would be challenging given the need to ensure adequate supplies.

“Between 2005 and 2018 we made huge achievements in cleaning up the energy sector, but for the next 30 years the external environment is completely different, and there may be more issues hampering an energy transition,” he said, alluding to the country’s economic slowdown and the challenges entailed in a phase-out.

Bai said that any phase-out must ensure that China has adequate power supplies when economic development is still driving up electricity demand. “We need to ask if we can provide enough power, both overall and regionally, after a coal phase-out.”

Commenting on Bai’s concerns, an energy expert who asked to remain anonymous pointed out that the report accounts for as much as a doubling of power demand, with renewables and natural gas substituting for coal, and that technical advances have reduced costs issues associated with renewables.

Previously research has predicted that renewables and nuclear power would account for 80 per cent of China’s energy mix by 2050, and coal only 5.3 per cent. “We don’t see these issues [raised by Bai] as a problem for the energy transition, which will benefit overall economic development and development of the energy sector, as well as boosting national energy security,” the expert said.

Yuan Jiahai, a professor at North China Electric Power University, pointed out that the report´s figures on stranded assets are based on the 980GW of coal power generation capacity China had at the end of 2017. Data from the China Electricity Council shows China had 1,010GW of installed coal power capacity at the end of 2018, accounting for 53 per cent of overall generating capacity and 64 per cent of power generation.

The report notes that the figures for stranded assets are much lower than those found by earlier research because it assumes the operational lifespan of the plants will be limited to 30 years, a phase-out policy will reduce the risk of early retirements, and planned power plants are not included.

The phase-out would mean 357 billion yuan (US$52 billion) less profit for China’s coal power producers under the 2C scenario. Yuan agrees that a mechanism to financially support coal power plants is needed to lower their utilisation but ensure they survive long enough to provide grid security.

Yuan describes technical, economic and even psychological obstacles to talk of a coal phase-out in China. “Everyone asks how, with the huge scale of coal power, we’re going to be able to close that many coal power plants in 30 years.”

Yuan said that China has created the world’s biggest, cleanest and most advanced coal power fleet, and any phase-out would have an immediate impact on that system, affecting the work and lives of huge numbers of people. China has long relied on cheap power to boost industrial growth, he said. If environmental costs are ignored, coal power is the cheapest and most reliable option. “If we can’t use the cheapest form of power, would that mean restricting economic growth?” said Yuan, reflecting a common concern. 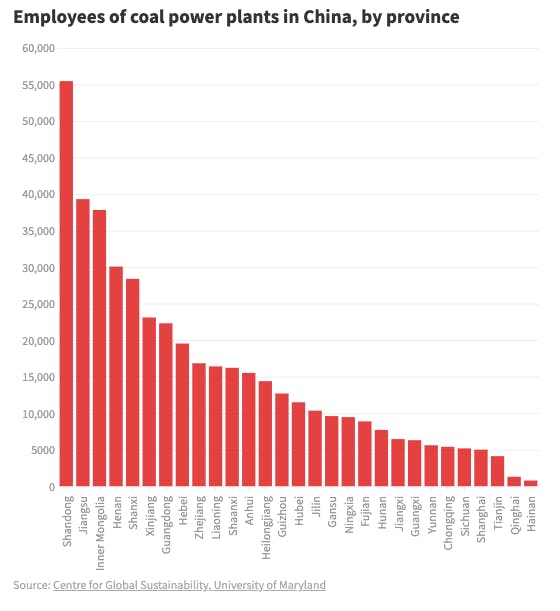 At the technical level, Yuan thinks a complete exit from coal remains difficult. Power grids require balanced generation, transmission and consumption of electricity, and so a cheap, controllable and reliable source is needed as a stabiliser. Currently, coal is China’s best option for that role. While some northern European nations may be able to draw most of their power from renewables due to hydropower, Yuan said: “so far nobody is running a safe and reliable electricity supply 365 days a year solely on renewables.”

Nonetheless, Yuan acknowledges that while a coal phase-out in the near term would result in various losses and challenges, halting new coal power construction would reduce the risk of coal plants becoming stranded assets over the next two to three decades, and that improvements in power generation and supply technology will help resolve grid security issues.

“The most important thing to do now is prepare for the future, increase use of new energy, promote the energy transition, and ensure coal power is phased out in an orderly manner over an appropriate timescale, to avoid excessive losses,” Yuan said. “I hope policymakers can both ensure near-term electricity security and work to meet mid- and long-term climate targets.”