Can technology keep farmers in farms?

The fourth industrial revolution and the technologies it has brought with it has boosted productivity and created jobs in certain sectors. How can the world leverage technology to improve agriculture, the one sector that has lagged behind?

By Hannah Alcoseba Fernandez
May 9, 2018

Automation and other technologies have created more jobs in sectors such as information and communications technology (ICT) or business process outsourcing (BPO), but the same is untrue for agriculture.

Speaking at the Technology for Inclusion conference, Carolyn Florey, technology for development lead of International Rice Research Institute (IRRI) said there is a net loss for jobs in agriculture because of technology.

Automation, for example, is replacing jobs in the agricultural sector with machines, as seen in the case of the United States where 40 per cent of the labour force was in agriculture in 1900. That number is now closer to 1 per cent, she said.

Technology has also given rise to better paying jobs in urban areas, which in turn has led to a labour drain from rural communities. “The youth are leaving farms to go to urban areas in search of opportunity. This trend will continue as wages are lowest in the agriculture sector in Asia,” Florey told an audience from the ICT, BPO, government, and agricultural fields at the conference held at the Asian Development Bank (ADB) in Ortigas Centre, Pasig City in the Philippines.

The youth are leaving farms to go to urban areas in search of opportunity. This trend will continue as wages are lowest in the agriculture sector in Asia.

Despite rural-urban migration, the report states that by 2030 the sector will still employ 21 per cent of the workforce in Bangladesh, 43 per cent in the Laos, and 28 per cent in Myanmar, even at the current rate the youth are leaving the industry.

The 368-page report stated: “It is therefore vital that productivity and earnings in the [agriculture] sector be raised to tackle the challenge of worsening inequality in the region.”

Florey said there must be support to get the right technologies to make make agriculture more productive, income-generating, efficient and attractive for youth to stay on farms. “There’s a good amount of evidence that if you’re using sustainable practices and proper crop management and you have information about how to do that, we are able to increase productivity and keep farmers in farms.” 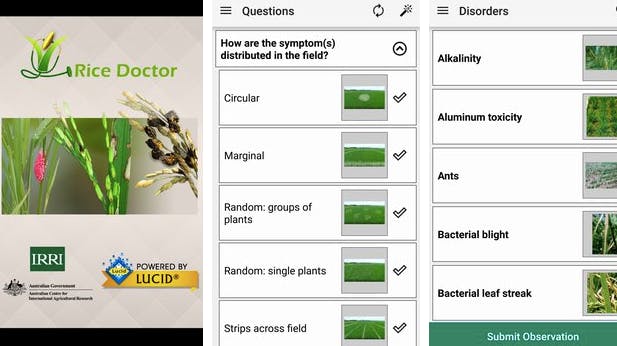 In the Philippines, the Rice Doctor app also comes in a Filipino language version so that farmers can better understand and use it. Image: IRRI

For instance, IRRI has developed technology for farmers like the Rice Crop Manager, a mobile app that gives farmers guidelines for applying the right amount of fertilisers for crops at the right time.

There is also the automated monitoring tool (AutoMon), an Internet of Things-based tool that helps farmers in irrigation scheduling and sustainable water management. The Rice Doctor is the third tool developed by IRRI. An offline mobile app, it helps diagnose pest, disease, and other problems that can occur in rice and teaches farmers how to manage them.

Farmers can also benefit from more information through the use of popular social media platforms such as Facebook or communication channels including Viber and WhatsApp. Keeping digital records of the agricultural value chain is another way to increase smallholder farmers’ access to information and allow them to choose where and when to sell their produce in order to get the best market prices.

For its part, the IRRI has taken to dissiminating information through the children of farmers, who are more tech-savvy, since the average age of farmers range from the mid to late 50s.

“Who is the person in the household who we can get in touch with? If the farmer has a basic phone, we have to focus on use of SMS (short message service) to disemínate information,” Florey said.

But farmers living and working in rural areas of countries including the Philippines, Bangladesh, and India also face difficulties in getting information due to limited Internet acces.

Florey called on companies to give rural areas, not just in urban areas, access to technology. “We really need to think about the policy and regulatory envrionment to promote, to encourage private sector investments in rural areas where the farmers are,” she said.

The agriculture industry can benefit from technology, but it will take imagination for this to happen, said the  speakers at the event. Ambe Tierro, global artificial intelligence capability and delivery lead of Accenture Technology, urged: “If we are merely focusing on job gains and losses, we are missing the most crucial point of the use of technology. We need to reimagine the work by assigning tasks for humans and tasks fit for robots.”