The desire of corporate giants to become 100 per cent renewable is driving clean energy investment and fuelling the energy transition worldwide. As businesses set their sights on greening their operations in Southeast Asia, can the region meet businesses' clean energy needs?

From Google’s latest purchase of a 1600 megawatt (MW) package of clean energy deals—its largest renewables buy to date—to Microsoft and Facebook’s major solar energy contracts in Southeast Asia, it seems that corporate thirst for renewable energy is growing in the world of big tech.

Tech giants have notably led the corporate charge towards clean energy, with both Google and Apple meeting targets to become 100 per cent renewables-powered across their global offices and energy guzzling data centres last year.

According to data from Bloomberg New Energy Finance (BNEF), global renewable energy procurement more than doubled from 2017 to 2018, with Google racing to the top as the largest corporate buyer of renewable energy this year.

Similarly, other members of RE100, a club of companies that have pledged to use only renewable energy to power their operations, have signed long term contracts and invested in clean energy projects in recent years to meet climate commitments while expanding their operations worldwide.

Google’s needs for their data center alone is more than the total solar currently generated in Singapore.

Last year, Google announced that it is building its third data centre in Singapore to meet rapid user growth in Southeast Asia, while Facebook has revealed that it will build the largest data centre in the city-state powered fully by renewable energy.

Set to launch in 2022, Facebook’s first data centre in the region will incorporate a megawatt of solar on the centre’s roof and generate 50 MW of electricity from 900 rooftop photovoltaic systems across the country through a 20-year power purchasing agreement (PPA) with local utilities company Sembcorp.

“Access to new renewable energy projects that are close to our data center facilities is a key factor for deciding where to place a new data centre,” said Bobby Hollis, director of global energy, site and selection at Facebook. “Since planning began, we have been working with a number of partners in Asia Pacific to source renewable energy to support the facility.”

He added that besides supporting all of Facebook’s operations with 100 per cent renewable energy, the company is further looking to develop new renewable resources on the same grids as the facilities they support in order to spur clean energy investment in the region.

Clean and green—how are corporates fuelling the energy transition?

Corporate power purchasing agreements (PPAs) have been a key driver of renewable energy infrastructure around the world, especially that of wind and solar. In Asia, where the corporate procurement market is still in its nascent stages compared to Europe and the United States, there has been an uptick in clean energy PPAs, mostly occurring in India.

At a renewable energy conference in Bangkok in June, experts said that while the US has seen the largest uptake of corporate PPAs so far, renewable energy deals are “set to take a significant chunk of the market in Southeast Asia” in the next three to five years as multinational companies with supply chain partners in the region continue to push for clean energy.

According to information from infrastructure industry source Inframation News, corporate procurement of renewable energy is also predicted to rise in Southeast Asia as countries such as the Philippines and Vietnam review their regulations on renewable energy purchasing.

This year, Vietnam’s Ministry of Industry and Trade plans to introduce the Direct Power Purchase Agreement (DPPA) mechanism, a new policy which will allow businesses in Vietnam to purchase from private renewable energy firms.

While independent power producers in Southeast Asia typically sell their electricity to state-run bodies that have a monopoly on the market, mechanisms such as the DPPA will encourage the development of renewable energy by allowing multinational corporations like Coca-Cola and Unilever to buy electricity directly from private clean energy producers in the country.

In countries such as Vietnam, where PPAs are still not bankable due to low government ratings, and Indonesia, where the political system favours the development of cheap coal, Wee believes that there is still a long way to go before corporate procurement of renewables takes off in the region.

Due to the limitations posed by low credit maturity, political dynamics and insufficient land, Southeast Asia is moving at a snail’s pace when it comes to the business of renewables, even with the falling cost of solar and wind.

“Solar systems usually require big parcels of land which may not be available in land scarce areas like Singapore,” said Sebastian Wang, assistant manager of marketing and communications at Singapore-based solar energy provider Sunseap Group. “But in urban areas where buildings are aplenty, solar systems can be installed on rooftops. The government is also opening up more areas to deploy solar systems to float on reservoirs and the sea to maximise deployment.”

Sunseap, one of the largest clean energy developers in Southeast Asia, will finish completing one of the world’s largest offshore floating solar systems located along the Straits of Johor this year. In 2016, the company also closed the deal to power Apple’s in-country operations with solar energy from 800 rooftops across Singapore.

“Singapore is a great location for our data centre, but there are space constraints that come with the location that we have had to take into consideration from the beginning,” said Hollis. “This just means we might have to consider new and innovative ways of sourcing renewable energy for the Facebook Singapore data centre.”

Not enough energy to go around—so what does 100 per cent renewable really mean?

Considering that data centres consume an estimated 200 terawatt hours of electricity per year—more than the national energy consumption of countries such as Iran—companies such as Apple, Facebook and Google are constantly searching for renewable energy to meet burgeoning demand for data centre and network services.

As it is almost impossible for large companies or factories to physically consume renewable energy, businesses that tout the 100 per cent renewable label are most likely matching every kilowatt of electricity they consume from the grid with a kilowatt of renewable energy produced somewhere else.

“You need a lot of land area for a solar system to produce the amount of energy a coal plant can produce. Google’s needs for their data center alone is more than the total solar currently generated in Singapore,” said Kang, whose platform uses blockchain technology to track clean energy transactions and authenticate renewable energy certificates (RECs). 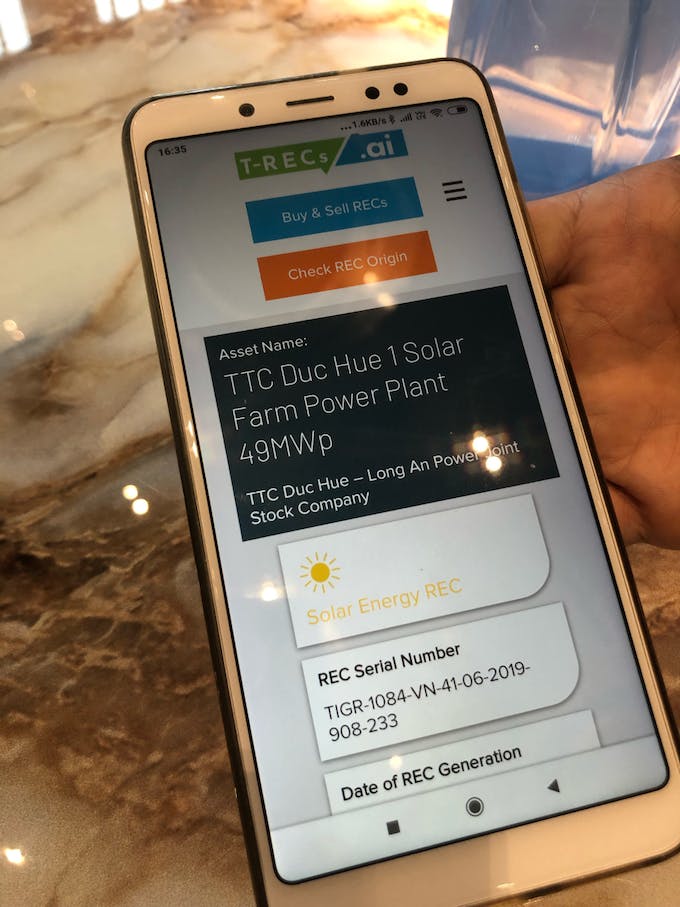 T-RECs uses blockchain technology to track renewable energy transactions so that buyers know when and where their energy was generated. This transaction shows that that electricity came from a solar plant in Vietnam. Image: Eco-Business

Since power on the grid is derived from all sorts of sources—both fossil fuels and clean sources—an end user is not able to tell where the megawatt hour of energy that they have purchased is coming from. So companies use RECS to certify that they have a valid claim to the carbon reductions from a specific project. A platform such as T-RECs tells buyers the exact time and location where the electricity was generated.

Kang believes that it does not matter whether companies physically consume renewable energy or not. According to him, the idea behind RECs is to encourage more renewable energy to be generated in the market, which is done by creating demand for the clean energy certificates.

“People are realising that there are more and more companies that want to buy renewable energy certificates. Since there is money to be made from building a solar plant and selling certificates based on the energy it produces, more players are now motivated to build more renewable energy plants,” he said.

“At the end of the day, assuming the electricity demand is the same, as long as you build one more solar plant, one less fossil fuel plant needs to be built,” Kang said.