A landmark petition seeks to hold big fossil fuel firms accountable for the deaths and suffering of millions of Filipinos affected by climate change disasters.

In a world first, typhoon survivors and environmental campaign groups in the Philippines have filed a national petition at the country’s Commission on Human Rights (CHR) to hold fossil fuel companies accountable for causing climate change and infringing upon human rights.

The group, led by Greenpeace Southeast Asia, marched to the CHR’s office in Quezon City in Metro Manila on Tuesday to file the 40-page petition, which demands an investigation into the activities of the 50 biggest fossil fuel and cement companies, or the so-called ‘Carbon Majors’.

Scientists agree that burning of fossil fuels for energy production is the biggest contributor of greenhouse gases in the atmosphere and is responsible for the continuous rise in global average temperatures.

The petition was a result of increasing concern about climate change among Filipinos as climate-related disasters become more extreme, affecting millions of lives and livelihoods in the country.

Greenpeace and the Philippine Rural Reconstruction Movement submitted the petittion on behalf of 12 other non-profit organisations and 1,308 individuals which include online signatories.

Elma Reyes, one of the survivors of Super Typhoon Rammasun which hit the country in July last year, has called for justice for those who lost homes and loved ones in the disaster. She said in a video with Greenpeace that she was worried about the future of her children if no action was taken to address climate change and its causes.

Reyes and other petitioners are seeking for the CHR to take the following actions:

This petition is an important step in making emitters of dirty and harmful energy accountable for their contribution to the climate crisis worldwide. They cannot continue taking our lives and livelihoods from us with impunity.

“Climate change has taken our homes and our loved ones. These powerful corporations must be called to account for the impact of their business activities,” Reyes noted in a statement.

Some of the Carbon Majors companies named in the complaint include investor-owned oil firms Chevron, BP, ExxonMobil, BP, Royal Dutch Shell and ConocoPhillips. They are among the 90 biggest contributors to global carbon dioxide and methane emissions in the earth’s atmosphere, based on research commissioned by Sydney-based Climate Justice Programme and Greenpeace International. 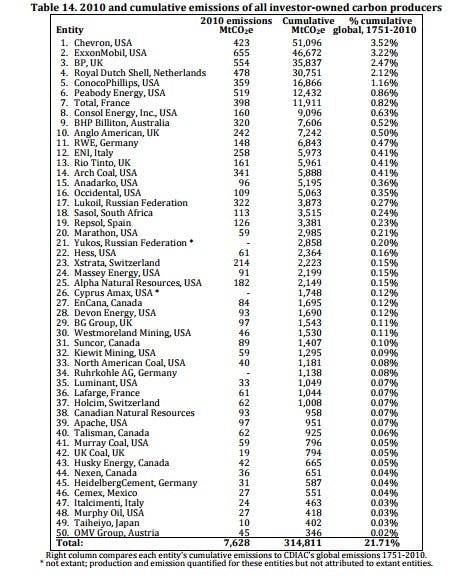 The petitioners accused the companies of benefitting financially despite knowing the harm associated with their products. They urged the CHR to launch its investigations this year.

“This petition is an important step in making emitters of dirty and harmful energy accountable for their contribution to the climate crisis worldwide. They cannot continue taking our lives and livelihoods from us with impunity,” said Liddy Nakpil, one of the petitioners and coordinator of Asian People’s Movement on Debt and Development, a regional coalition of grassroots and community organisations.

More people are turning to the legal system, filing complaints against governments and companies to hold them accountable for their actions.

Island nations in the Pacific including Vanuatu, Kiribati, Tuvalu, Fiji and Solomon Islands have also declared in June this year their intent to bring legal action against big polluters.

The Dutch have already shown that the legal system can deliver climate justice. In a landmark ruling in June this year, a Dutch court has ruled in favour of non-profit group Urgenda and Dutch citizens, ordering the government to cut its emissions by at least 25 per cent as opposed to planned cuts of 16 per cent.

Zelda Soriano, legal and political advisor for Greenpeace Southeast Asia, commented: “From the Netherlands to the US, people are using legal systems to hold their governments to account and demand climate action. We hope that the Commission on Human Rights of the Philippines will take the bold step in being the first in the world to hold big corporate polluters accountable for their contribution to the climate crisis.”