Green building standards have created more awareness of the sustainability agenda in the industry, but on their own cannot decarbonise the built environment by 2050, says Transsolar’s managing director, Thomas Auer.

The alphabet soup of green building standards is not enough to help the construction industry meet its goal of net zero buildings carbon emissions by 2050, said a keynote speaker at a recent conference in Hong Kong.

Green rating tools are helpful to ensure the quality of design of buildings, but they do not necessarily lead to innovation or create aspiration, shared Thomas Auer, managing director and founder of German climate engineering firm Transsolar, at the World Sustainable Built Environment Conference 2017.

In this question and answer session with Eco-Business, Auer, who is also professor of building technology and climate responsive design at the Technical University of Munich, talks about why green building standards while having made huge contributions in altering mindsets do not go far enough, the problem of air-conditioning, and whether the construction industry can achieve peak emissions by 2020.

The transcript has been edited for brevity and clarity.

Transsolar is a proponent of KlimaEngineering, or climate engineering, where you take low tech, low energy solutions and apply them in the design and construction of sustainable buildings, taking into account the natural environment. Isn’t that part of what architecture should already be doing?

Vernacular architecture, which is architecture developed around local conditions such as climate and available materials, has gotten lost over the centuries, especially since the development of modernism. It’s stupid because what we try to apply in buildings is common sense: Get daylight in, or open the window if it’s nice outside.

So now that we’re trying to bring climate-sensitive design back in to architecture, what do you see is the role of the designer or the engineer?

Let’s talk about these green building rating systems, like the US Green Building Council’s LEED or Hong Kong Green Building Council’s BEAM Plus. These tools are helpful to ensure quality of design, but they don’t lead to innovation or create aspiration. We can construct buildings where 50 per cent of inhabitants are disconnected from daylight, and still get LEED platinum.

Green building ratings tweak the current model, but don’t question how we do design buildings. That’s the responsibility of designers and engineers: To provide design quality based on generic tools, but also come up with our own aspirations for each building we are working on.

I fully agree. LEED has made huge advances in the United States. Municipalities are now asking for only LEED-rated buildings. Sustainability has become the norm. At the same time, it’s become desirable for developers and a selling tool. That’s fine, but ratings have not significantly reduced carbon emissions for buildings.

These tools have made a huge contribution in terms of altering mindsets [when it comes to awareness of sustainability issues], like the Paris Agreement. But now it’s up to architects, engineers and researchers to be more aspirational in what we do.

How do you think the construction industry views sustainability right now? In your experience with Asian markets—for instance Transsolar did technical consulting work for Gardens by the Bay in Singapore—what do you think is the level of awareness in Asia?

A decade ago, work on urban design in China was only about how fast a building could be built, but air quality issues have become a driver of change and there is growing awareness [towards buildings as a sustainability issue].

The West is already built, so the biggest question is dealing with existing building stock. But if we look at developments in Southeast Asia and China, growth is going to happen on an unbelievable scale.

Europe always pretends to be super sustainable and great, but it’s easy to be energy efficient in a benign climate.

We have statistics that say by 2050 to 2070, two-thirds of the world’s population is going to live in cities and if we take population growth into account, we’re talking about 2 to 3 billion people we have to build housing for in the next three decades.

But through our work in Singapore, China, Hong Kong and India, we see that there’s a higher aspiration and a better understanding of the necessity of sustainability than in the Western world, where sustainability is more of a luxury.

You’ve said that we can’t simply tweak business as usual. What do we do then?

Something I did not talk about just now was the issue of energy generation on a regional or country-wide scale. The more renewable energy sources we have, the more fluctuating loads we get in our power grid. When the sun shines, we get solar power and vice versa.

But this is a big problem for our grid, and we think that buildings’ thermal mass—that is, a material’s ability to absorb and store heat energy—can be used to deal with those fluctuating loads.

And so in the Technical University of Munich, we’re running a research project where we model Germany’s energy production and its entire building stock, and combine them to see if we can work out a smart control for heating and cooling so that we only use them if there is surplus energy in the grid.

My prediction is, if renewable energy becomes 80 per cent of the energy mix, then the question is not going to be how much energy we use, but when do we use our energy? This is going to become a more critical question for buildings in the next 10 years. 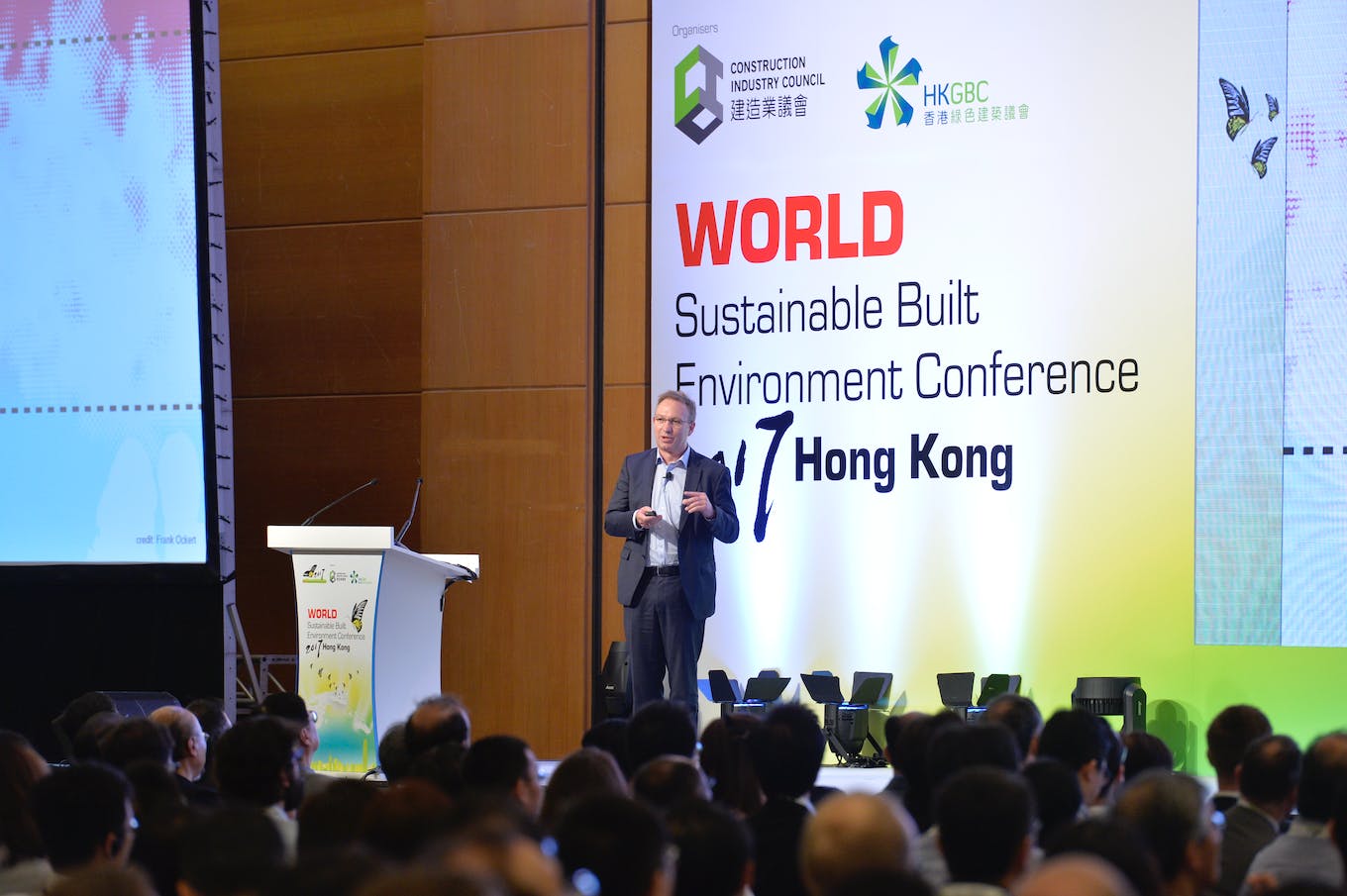 I noticed that in the building designs you presented during your speech, there was very little airconditioning (AC). Are you against AC?

Having been in Hong Kong for a few days now, I’ve started to love the AC in the hotel. No, we are not against AC per se. In a humid environment, such as Hong Kong has been this week, you deal with humidity with AC.

What I’ve noticed over the last couple of days is that when you wander around the city and then go into shopping malls, there’s always this extreme between sweating to death and freezing to death. This is not healthy.

But I walked into St John’s Cathedral in Central, where they use elevated air speed at temperatures of close to 30 degrees, the doors were wide open and it was comfortable. The indoor environment can be close to external temperatures, and you don’t have to have these shock conditions all the time.

Right now the aim is to get the building sector to carbon neutrality by 2050. Meanwhile, Christiana Figueres, former executive secretary of the United Nations Framework Convention on Climate Change and driving force of the Paris Agreement, has said that we need to start turning the emissions curve by 2020. How much progress has the building industry made towards that, and do you think we’ll get there?

I’m pessimistic, because I don’t believe that the industry has recognised the problem, or it has but is not acting on it.

Europe always pretends to be super sustainable and great, but it’s easy to be energy efficient in a benign climate, so let’s take Europe out of the equation. In countries where there is a desire and a need for air-conditioning, it’s stupid that we have to wear jackets indoors.

Through our work in Singapore, China, Hong Kong and India, we see that there’s a higher aspiration and a better understanding of the necessity of sustainability in Asia than in the Western world, where sustainability is more of a luxury.

Japan has made it so that its people don’t wear ties at work in the summer, so that they can increase indoor temperature. This is what we need to do: think about office dress codes, think about the behavioural aspects (of sustainable buildings).

I do not believe that technology will bring us to where we have to be. It will make a significant contribution, but we have to combine it with behaviour change, which is easy to translate into building operations and could have a big effect right away.

But I don’t see that the awareness is there, in facility management or building owners or home owners.