The Singapore offices of Asia Pacific Breweries (APB), Eastman Chemical, Globalfoundries and Nestlé led the 18 recipients at this year’s awards, which is the highest number of awardees since the launch of the EENP Awards two years ago.

These multinational companies, which exemplified commitment and achievements in energy management, received their awards from Minister Grace Fu of the Prime Minister’s Office and Second Minister for the Environment and Water Resources and Second Minister for Foreign Affairs during the awards ceremony that opened the 2013 National Energy Efficiency Conference (NEEC) at the Singapore Expo.

The National Environment Agency (NEA) of Singapore, the Economic Development Board (EDB) and the Energy Market Authority (EMA) are the organisations behind the EENP and they said the Awards aim to develop a culture of better energy use in Singapore, especially among industries or firms that consume large amounts of energy.

Over the years, Singapore-based companies are increasingly recognising the need to manage their energy costs just as they manage their manpower and other operating costs

According to these three organisers, companies enhance their long-term business competitiveness and reduce their carbon footprint when they adopt energy management best practices.

“Over the years, Singapore-based companies are increasingly recognising the need to manage their energy costs just as they manage their manpower and other operating costs,” said NEA chief executive Ronnie Tay.

“The increase in the number of EENP Awards recipients this year reflects companies’ efforts in achieving good energy management and better energy efficiency,” he added.

APB, Eastman Chemical, Globalfoundries and Nestlé Singapore all won in the category of ‘Excellence in Energy Management’.

APB Singapore was recognised for its goal to become a “Green Brewer”, setting a target for 2014 to reduce thermal energy and electricity by 13 per cent. The awards organisers also noted the company’s current initiatives on process optimisation and waste reduction.

Eastman Chemical Singapore has similarly been reducing its energy impact with different initiatives, a few of which are implementing short- to medium-term goals for energy saving. The United States-headquartered firm also conducts training and capacity building with an Energy Management and Conservation (ENMCON) energy team consisting of members from different departments.

Aside from ‘Excellence in Energy Management’, the other award categories are: Best Practices and Outstanding Managers of the Year. Both Eastman Chemical and Globalfoundries were recognised in this latter category last year.

Some public agencies are also given a Commendation for Best Energy Efficiency Practices in the Public Sector.

Separately, the NEA and the Institution of Engineers, Singapore (IES) signed a Memorandum of Understanding (MOU) at the NEEC 2013 opening ceremony. These two organisations joined hands to form and co-chair the Singapore Certified Energy Manager Steering Committee (SCEM-SC) – the group that will be responsible for the training and certification of the Singapore Certified Energy Manager (SCEM).

“This will help ensure that energy managers are equipped with the professional knowhow required to undertake statutory obligations under the Energy Conservation Act and energy efficiency innovations in their companies,” explained professor Chou Siaw Kiang, IES president.

The Energy Conservation Act, entered into force on April 22 of this year, requires registered corporations (of a particular criteria) to appoint at least one energy manager from among its employees who holds an SCEM (professional level) certificate by April of next year. 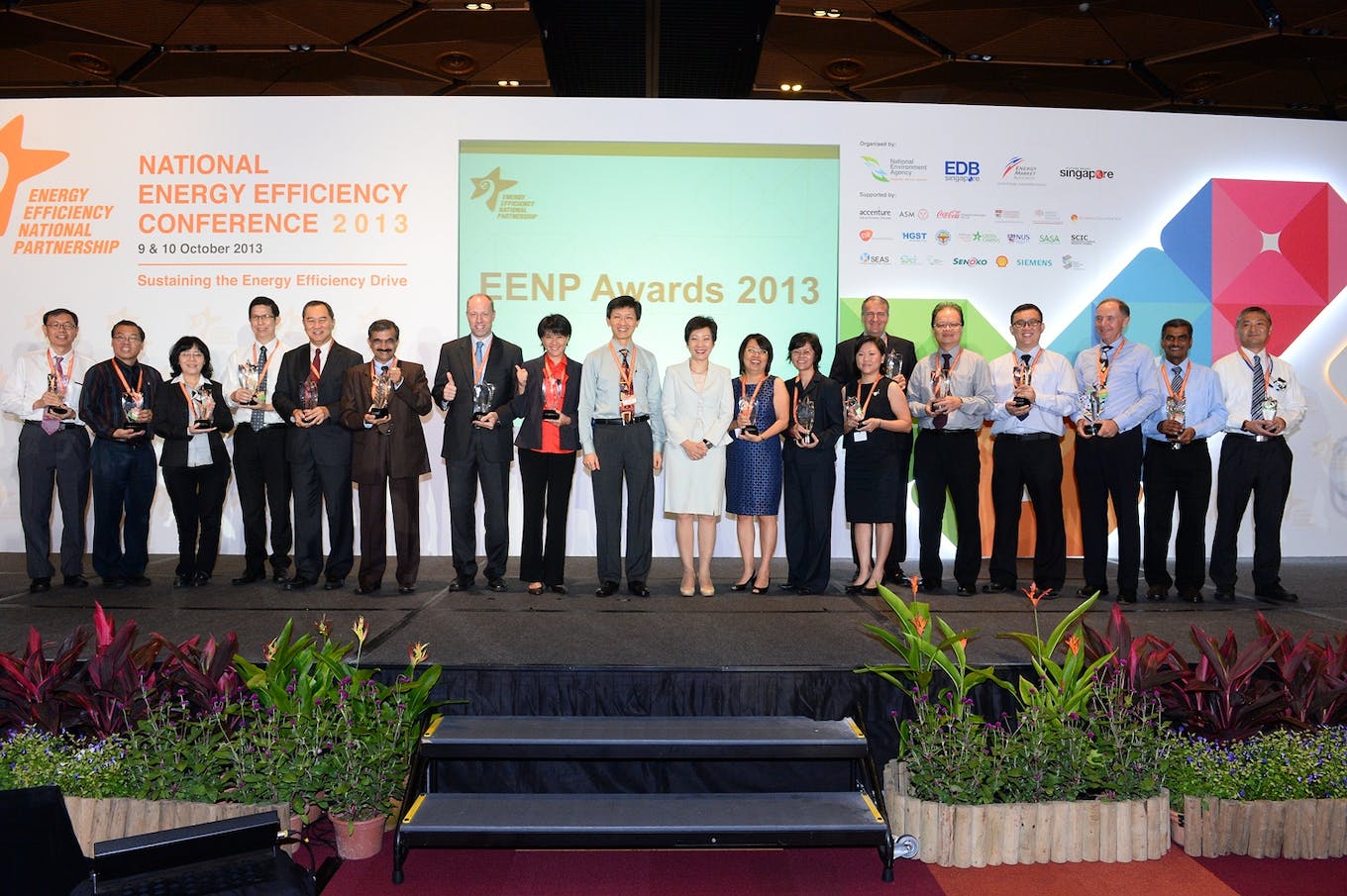 Winners of the 2013 EENP Awards receive their prize during the opening ceremony of the National Energy Efficiency Conference. Image: NEA

Outstanding Energy Manager of the Year

Commendation for Best Energy Efficiency Practices in the Public Sector