Analysis: How China is powering the Winter Olympics 2022 in Beijing

China is branding the Winter Olympics 2022 in Beijing as the first “green” Olympic games, including the first games to run on 100 per cent renewable electricity.

In a new analysis for Carbon Brief, we show that the desire of China’s leadership to showcase clean energy development and make it a part of the country’s international image, while important in itself, is backed by real developments on the ground.

Zhangjiakou, the mountain city in China’s Hebei province that is hosting the skiing events of the games, has renewable energy capacity exceeding that of most countries in the world – and a pioneering “Zhangjiakou Green Electric Grid” built to deliver power from the city to neighbouring Beijing.

Moreover, the pilot renewable power grid is a scale model of a much larger plan that the Chinese government is rolling out nationwide, as it aims to peak carbon dioxide (CO2) by 2030 and reach carbon neutrality by 2060.

From the start of the preparations, in mid-2019, to the end of the games, the venues will require about 400 gigawatt hours (GWh) of electricity, according to the organisers. This is equal to the annual electricity consumption of approximately 180,000 Chinese households.

By the end of 2021, the installed capacity of wind and solar power in China was more than 600 gigawatts (GW), with both technologies crossing the 300GW mark last year. Including hydro power, a total of 2,480 terawatt hours (TWh) of renewable electricity was generated in 2021 in China. China’s plentiful renewable energy capacity can, therefore, easily cover the Olympics electricity use.

However, instead of simply purchasing renewable electricity on paper, via the trading mechanism, the government has used the games to pioneer a dedicated renewable power grid.

State Grid Beijing Company manages the renewable electricity electricity trading for the games. This electricity mainly comes from 11 wind and solar power generation companies located in Zhangjiakou. The organisers report having purchased 171GWh of “green” electricity – wind and solar by 30 October 2021 and 237GWh by the end of 2021. These numbers imply that the electricity use at the venues during the Olympics themselves will be around 160GWh.

The winter Olympic games has accelerated the construction of the Zhangbei renewable energy flexible direct current (DC) grid. The Beijing 2022 games rely on this newly-built infrastructure in Zhangjiakou City, a $2bn project launched in June 2020 to distribute wind and solar power, with pumped hydro storage to regulate the variations in output.

Wind and solar power installations in Zhangjiakou were accelerated as well, with capacity hitting 23.4GW, breaking down into 16.4GW wind and 7.0GW solar. If the city was a country, its combined wind and solar capacity would be the twelfth largest in the world, as shown in the chart below, behind Brazil but ahead of Vietnam. 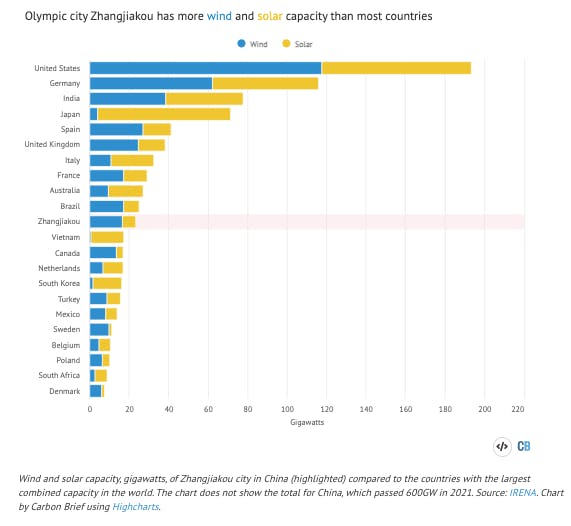 At an average operating rate for January-February, wind and solar power generation in Zhangjiakou during the 17 days of the games will be around 2,300GWh, about 10 times the projected electricity consumption of the Olympic venues during this time.

The city’s installed coal-fired power capacity, at 5.9GW, is dwarfed by the renewables installations. We estimate that more than 60 per cent of electricity generation in the city in January-February will be derived from wind and solar power, as shown in the chart below. Output from wind and solar would also exceed Zhangjiakou’s total consumption during the period.

This 60 per cent share for wind and solar stands out particularly strongly from the rest of Hebei province and from Beijing, where fossil fuels generate 90 per cent of all electricity at this time of the year. The average for the whole country is approximately 75 per cent (rightmost column). 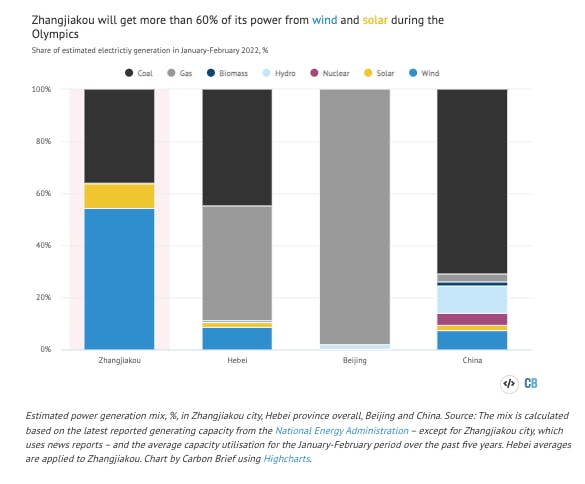 The “flexible green electricity grid” in Zhangjiakou is the first of its kind to use direct current, a technology much better suited for very long-distance transmission than alternating current.

Besides wind and solar generation capacity, the grid is connected to the Fengning pumped storage plant, which can store renewable electricity to be dispatched later, shown in the map below.

In addition to the grid linking Zhangjiakou to Beijing, the city’s renewable energy installations feed a direct long-distance transmission line built to power the new city of Xiong’an, China’s “city of the future”, being built outside of Beijing. 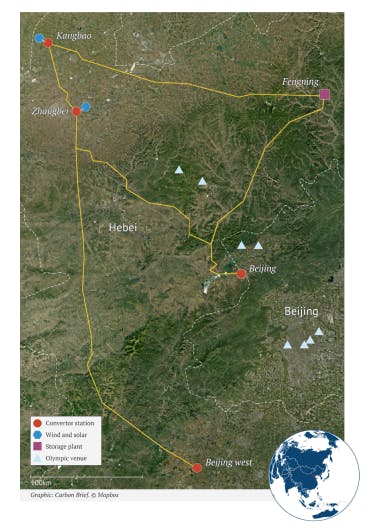 An approximate map of the green electricity grid connecting wind and solar power in the western part of Zhangjiakou to the Fengning pumped storage station and to a converter station near Beijing. There are two converter stations with dedicated wind and solar capacities in Zhangjiakou. The locations of the Olympics venues are shown as well. Source: Project maps for the Zhangjiakou green grid and the Zhangbei-Xiongan UHV line.

A long-standing challenge with China’s long-distance transmission lines has been their inflexible operation, which has meant that much of the power dispatched through the lines has been generated from coal. The Zhangjiakou project is about pioneering a new institutional set-up that is required for the power grid to absorb high shares of intermittent generation, at least as much as new hardware.

However, the measures that coal-fired power plants report taking to ensure stable power supply during the Olympics highlight that China’s power grid is still highly reliant on coal.

State-owned power generation groups ordered their plants in the Beijing-Tianjin-Hebei area to stockpile enough coal – more than 30 days – and carry out their maintenance before the end of 2021, so that they are all available to generate during the games.

Coal deliveries are being given priority in rail and road freight. The government’s requirement to increase coal stockpiles in the provinces that have an important role in power supply for the Olympics has triggered a recent coal price increase.

s if to highlight the continued reliance on coal-fired power, a new 2,000 megawatt coal-fired power plant was approved in the relatively wealthy coastal province of Zhejiang during the first week of the games.

In addition, the Ministry of Industry and Information Technology and Ministry of Ecology and Environment jointly published a “notice on peak shifting production for the iron and steel industry in Jingjinji areas in the winter heating season of 2021-2022” to reduce air pollution.

In spite of impressive gains, this shows that short-term measures are still required to ensure acceptable air quality during nationally important events.

Zhangjiakou’s wind and solar can currently generate about 44TWh per year. The city’s own consumption is about 19TWh, leaving about 25TWh for exports.

After the athletes go home, the “green grid” is projected to transmit about 14TWh of renewable energy from Zhangjiakou to Beijing every year, equivalent to approximately 10 per cent of the electricity consumption of China’s capital, leaving a lasting legacy from the games.

Another 7TWh per year will be transmitted to Xiongan, China’s “city of the future”, being built outside of Beijing. The transmission to Xiongan takes place through the dedicated Zhangbei ultra-high voltage transmission line.

Meanwhile, Zhangjiakou is aiming to more than double its wind and solar capacity from current levels, to reach a combined 50GW by 2030.

On an even larger scale, China’s central planner the National Development and Reform Commission (NDRC) has recently announced the first batch of projects and plans for China’s “clean energy bases” in the west around the Gobi desert, with a capacity of 100GW, and is reportedly finalising the second batch, with 400GW of capacity to be installed by 2030. The bases will be a vast regional network of wind and solar power installations designed to transmit power to the demand centres in the east.

At the same time, fossil-fuelled power generation continued to grow in 2021 and CO2 emissions from the sector are only due to peak late this decade. Investments in new coal-fired and gas-fired power plants continue, increasing 19 per cent on year in the first 11 months of 2021.

This might appear paradoxical, as renewable energy has a clear cost advantage against new coal power, especially after the increases in tariffs paid to coal power plants late last year. In response to the coal shortage and power crisis, the government allowed tariffs paid to coal plants to rise up to 20 per cent above the province-specific benchmark prices.

This means that coal-fired plants are paid more for their power output than new wind and solar power projects, whose tariffs are pegged to the benchmark price for coal power.

Besides opposition from vested interests, the key issue determining the pace of China’s transition is the confidence of decision makers that clean electricity can keep the lights on without further additions of coal-fired capacity.

Pioneering regional grids with a high share of renewable energy – and especially a grid that powers the top decision-makers’ own offices in Beijing – has broader national significance in this context.