Accor's Planet 21 - a game-changer in hospitality

With a 91 per cent success rate so far, Accor's Planet 21 programme is gradually driving a change in the global hotel industry towards sustainability, reports Mint Kang.

Convincing hotel owners and managers to invest in sustainability can be an uphill task. There are many priorities to balance - from financial considerations to customer expectations, and branding to guest satisfaction.

So when global hotel operator Accor decided, in April 2011, that it would get all of the 3,000 hotels it manages worldwide (which has grown to more than 3,700 since) to achieve at least a basic level of sustainability by the end of 2015, it was an ambitious undertaking, to say the least.

To drive this effort, Accor launched Planet 21 in 2012 – an initiative that raises the standard on how the hotel industry approaches sustainability.

Each commitment carries three quantifiable objectives and corresponding actions which should be met by the end of 2015, and individual hotels can aspire towards varying levels of commitments.

Ideally, 100 percent of Accor-operated and franchise hotels will have fulfilled at least 10 action items  before 2015 ends. As of December, a good 91 percent of Accor’s 500 plus hotels in Asia Pacific including participating franchisees have met that target.

“Achieving that 91 percent was not easy,” says Mallika Naguran, Accor’s sustainable development and communications manager for the Asia Pacific.

“Some of the hotels faced challenges in implementing the commitments, usually financial considerations. A few of the hotel owners had other priorities, and we spent time to engage them and come up with a way to balance their needs,” she says.

Accor’s sustainability efforts are not a recent thing and go back to the early 1970s. In 1974, Accor’s management had described the environment as “tourism’s raw material”.

This view persisted through the years and in 1994, the Paris-headquartered company became one of the first few French corporations to set up an Environment Department that focused on mitigating its environmental impact.

Planet 21 is Accor’s latest step towards aligning its business – and as much of the industry as it can influence – with the growing global importance of sustainable development today.

It is also a response to the increasing calls for large corporations to responsibly manage their impact on the environment and the communities they operate in.

More than an ethical commitment, he says Planet 21 “is also a powerful lever that will boost our brands’ competitiveness, our attractiveness and ensure the loyalty of our partners, employees and customers who want to take action with us in favour of responsible growth capable of creating shared value for everyone”.

Sustainability and hospitality: a perfect match 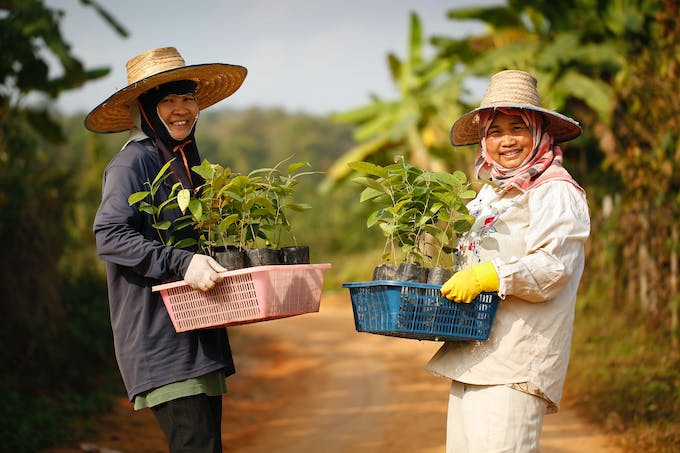 Accor supports an agroforestry project called Dhamma Raksha in northern Thailand, through its Plant for the Tree initiative. Image: Accor

Hotel guests today are also keen on sustainability, according to Accor’s own research. Not only are they aware of the need for sustainable development, they are also willing to take sustainability into account when choosing a hotel.

In 2011, Accor carried out an international tracking study, “Sustainable Hospitality: Ready to Check In?”, which was published on its Earth Guest Research knowledge sharing online platform. Out of almost 7,000 guests surveyed over six countries, seven in 10 claimed that they would accept a less favourable location and higher prices if they felt that the hotel’s policies and services inclined towards sustainability.

Survey respondents also indicated that they are sensitive to negative externalities from a hotel’s operations, suggesting that they might be less willing to stay in a hotel that does not have sustainable policies.

Hotel owners themselves do make some efforts to match these guest expectations, says Naguran. “Generally speaking, hotel owners are conscious of the fact that tourism does have a social and environmental footprint, and they try to minimise that footprint in line with what is required of a responsible organisation,” she adds.

Against this backdrop, Planet 21 becomes more attractive to hotel owners, and Accor has also tried to make it accessible. For instance, the commitments are presented as guidelines for improving the hotel, rather than as absolute requirements.

Planet 21 also encompasses areas such as child protection, reforestation and protecting biodiversity. Accor has been particularly active in child protection, including providing training for hotel employees to identify and respond to situations where a child is at risk.

“The entire programme is designed to benefit the hotels as much as it benefits society and the environment,” says Naguran. “Not only in conserving resources and minimising pollution, but also in helping to improve their bottom line, staff morale, and public image.”

In 2013, participating hotels in the programme in the Asia Pacific region saw a 3.4 per cent reduction in water consumption and a 3.8 per cent decrease in energy use as compared to 2012.

Chi Lo, sustainability and social responsibility specialist with the Pacific Asia Travel Association (PATA), a non-profit membership association focusing on responsible travel and tourism within the Asia Pacific, remarks that the business case for sustainable tourism is significant.

“Responsible business practices have been shown to both cut costs of operations as well as have a positive impact on the surrounding community in which the business operates,” she says.

Innovative ways of striking a balance

Sustainability in the hotel industry today can be compatible with comfort and even luxury. This belief is held by not only sustainability advocates and hoteliers, but by hotel guests themselves.

Responsible business practices have been shown to both cut costs of operations as well as have a positive impact on the surrounding community in which the business operates.

Accor’s 2011 study found that two-thirds of customers do not think sustainability and comfort will clash, and a number of Accor-operated hotels are trying to marry the two with innovative approaches to their Planet 21 commitments.

Ibis Singapore on Bencoolen has launched a PET-free programme under which guests are provided with still or sparkling water from an in-house filtration system rather than the usual mineral water in plastic bottles.

Some hotels also provide environmentally and socially-friendly pens made in Indonesia using recycled newspapers by the “Yayasan Peduli Tunas Bangsa” Accor Foundation that offers employment and financial support to the underprivileged.

“Sustainable development in Accor is often embedded in the very way the hotel is designed,” says Naguran. “It is also in the way amenities and facilities are maintained such as water and waste treatment systems, and in operations such as housekeeping.”

For example, she explains, when guests reuse their towels and bed linens, half of the savings on laundry bills fund a reforestation and biodiversity protection project, “Plant for the Planet”.

Under this project, which predates Planet 21 but was brought under its umbrella, more than 225,000 trees have been planted around the region since 2008.

Ultimately, however, the success of any sustainability initiative in the hotel industry – whether driven by industry players, customers, non-profit organisations or any other stakeholders – comes down to how much of a commitment management personnel and hotel owners are willing to make.

“We have seen great dedication from the general managers in many of our hotels, as well as strong support from hotel owners,” says Naguran of Planet 21’s current 91 per cent success rate.

“The sustainability development work done under Planet 21 should be attributed to their willingness to embrace corporate social responsibility and adopt sustainable innovations even at some financial expense.”

Nevertheless, she adds, there is still a chance that even with all the commitment and hard work by hotel owners and managers, Planet 21 will not see a 100 percent success within its targeted time frame.

“The hotel industry can be volatile, and there is always the risk of external events affecting travel and tourism. We and our business partners will continue to do our best.”

Even if Planet 21 does not reach its ultimate target, Accor is moving in the right direction, says PATA’s Chi. “It’s never enough, but to start is an accomplishment in itself.”

This story was originally published in the Eco-Business magazine. Read this story in a magazine layout here.