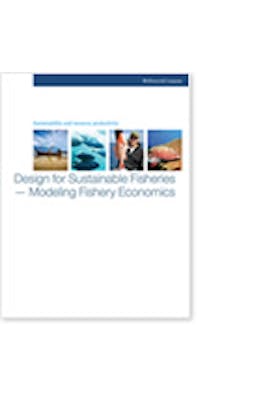 Fisheries provide employment for 180 million people worldwide and represent a significant percentage of the animal protein consumed globally, particularly in developing countries. Fish and fishery products are one of the most widely traded agricultural commodities with exports worth more than $85 billion in 2008.

But marine fisheries today are under pressure. While fisheries in some developed countries are recovering, overfishing has impoverished the state of the marine ecosystem globally. According to Food and Agriculture Organization (FAO) data, 30 per cent of fish stocks are currently considered overexploited, with another 50 per cent considered fully exploited. In addition to being both a biological and a food-supply tragedy, the erosion and subsequent collapse of fisheries pose an immediate economic threat to fishers and others whose livelihoods depend on fishing. This threat extends beyond fishers to all participants along the value chain whose economic activity represents an estimated $500 billion per year. There have been a number of studies highlighting the fact that the economic contribution from the world’s marine fisheries is significantly smaller than it could be if fisheries were managed to their maximum sustainable yields. The World Bank estimates annual lost revenues to be $51 billion per year; other estimates range from $46–$90 billion per year. Establishing biologically and economically sustainable fisheries is clearly desirable and necessary.

However, achieving sustainable fishing practices is not a straightforward task as there are significant challenges that ultimately inhibit their realization, especially in making the transition to sustainability, as reducing catches and introducing new fishing practices to allow fish stock to recover are often necessary—which generally mean hardship for some stakeholders, albeit temporary.

That said, only a limited amount of research has been done to explore the challenges of a transition to sustainable fisheries in detail, particularly regarding the economic implications for the different players along the value chain. While there has been extensive biological modeling, there has been little work that focuses on the biological implications of a transition to sustainability and adds the economic modeling of different players in the value chain, enabling the exploration of scenarios that are realistic both biologically and economically. This report helps fill these gaps, presenting a methodology for identifying and evaluating pathways to sustainable fisheries.

The methodology is demonstrated by exploring the biological and economic impact of different pathways to sustainability for three different fisheries: East Atlantic bluefin tuna, Gulf of Mexico red snapper, and tropical grouper—each of which are either in imminent danger of collapse, or face significant challenges to achieving sustainability. This methodology could also be beneficial for understanding the economic value and sustainability of other fisheries.

The intention of this report is to engage all stakeholders in discussions that explore the best means of establishing sustainable fisheries around the world, based on a clear understanding of the options and their biological and economic implications.