The coverage of climate change and the rhetoric around it are wearing me down.

On Saturday 18 April, President Obama declared during his weekly address that there is “no greater threat” than climate change. “7 Scary Facts About Climate Change” shouted the MSNBC network a few days before. Setting the tone earlier still, global warming’s math is “terrifying”, roared Bill McKibben of 350.org, before broadcasting a “call to arms”.

They are all correct of course: If we don’t tackle climate change the consequences are existential.

But “apocalypse now” is only half the story, and it’s the bit that turns people off: The bad, terrifying news is simply ignored as people resume what they were doing just before hearing about it. Associating a planetary emergency with the need for wars, cost and sacrifice, without explaining the opportunities and practical solutions, is like a cry to build arks and retreat to the mountains: People are not interested.

Some, like the British Green Party, go even further, and use our needs to clean up our environment in precisely the wrong way: As an attack on economic growth as a policy goal, and therefore on jobs and wealth creation. To combat climate change, they say, we have to change everything about our lives and the way we organize the economy.

Climate action is not a “long battle” at all. Instead, it’s a clever business strategy — and a political program — that promotes economic prosperity. It is, in fact, probably the biggest driver of economic growth, job creation and innovation over the coming decades. Climate action will also release massive funding to education, healthcare, defense, and other critical areas of voters’ concern. 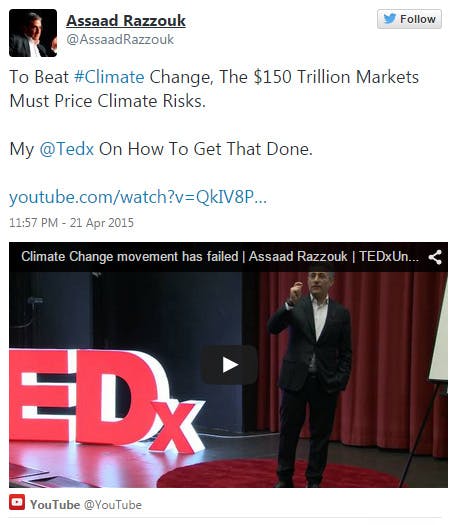 We are going to create tens of millions of job building the clean energy infrastructure worldwide, implementing energy efficiency measures, retrofitting our transportation infrastructure with electric power charging stations and solar-powered roads, electrifying our cars, and modernizing our planes.

In fact, we already are.

Climate action is not a “long battle” at all. Instead, it’s a clever business strategy — and a political program — that promotes economic prosperity. It is, in fact, probably the biggest driver of economic growth, job creation and innovation over the coming decades.

According to the International Renewable Energy Agency, jobs in renewable energy reached 6.5 million already and are expected to exceed 20 million globally by 2030. Most of the newly created jobs feature better working environments and higher technical skills and replace low quality unstable ones, for example on oil rigs or coal mines. The faster renewable energy develops, the quicker we will beat these employment forecasts, as we will.

This is neither a “terrifying battle” nor a reason to expect lower economic growth. It’s a clear sign that climate action and job creation go hand in hand.

Companies like Tesla, Nest, SunEdison and SolarCity are hugely exciting innovation drivers: They have come out of nowhere to shake entire sectors and industries.

They aren’t about “fighting climate change” at all. Rather, they are about paradigm change or creative destruction — operating at the intersection of the “internet of things” and technology to underpin the rapid growth of distributed generation and a renewal of aging infrastructure: Roads, water supply, electrical grids, telecommunications and so forth.

Imports of oil, gas and coal have caused one of the largest transfers of wealth among nations as countries expand modern petro-driven transportation systems and large-scale power generation fueled by coal and natural gas. By contrast, climate action creates huge economic benefits across the board — and the cherry on the cake is that these are not in Saudi Arabia or Qatar, they are right at home, near you.

For example, Japan will save approximately $200 billion a year by eliminating annual fossil fuel imports (oil, gas and coal), the UK $40 billion, India $145 billion, and the Philippines $15 billion — a cool $400 billion each year for just these four countries. Contrast these amounts with Japan, the UK, India and the Philippines’ support for renewable energy, a meager 1 per cent of their fossil fuel imports. The U.S., for its part, should save $150 billion a year by switching to renewable energy, according to analysis by the Climate Group.

Cutting fossil fuel imports by promoting domestic clean energy solutions must be the proverbial no-brainer. The money now spent on fossil fuel imports — and then on subsidizing our use of these fuels —  will be much better spent on boosting the domestic economy through investments in improved infrastructure, education and healthcare.

This is not simply “energy independence,” but a conscious diversification of energy sources, and a path to much increased national wealth.

Clearly, it will take a few decades to eradicate fossil fuel-based consumption: approximately 78 per cent of oil is used by the transportation sector and 22 per cent is used in tens of thousands of other sectors, for example ink, plastic, deodorants, tires and asphalt.

But we can get started by creating domestic wealth (instead of exporting it to oil, gas and coal exporting countries) right now, on a much greater scale than is occurring — all of it paid for through savings on fuel imports.

There is also another tremendous benefit to climate action: a clean-energy fueled infrastructure revitalizes communities and increases civic participation. If we use community-centered solar farms and local waste-to-energy plants, we no longer have to deal with massive and impenetrable utility companies via automated phone systems. Instead, we can re-build real relationships with our local communities.

All sectors of the economy and society will prosper from climate action: The “prosperous green” narrative is all encompassing and mainstream.

We should be talking about how being green is the biggest driver of economic growth, job creation and prosperity over the coming decades. This is a compelling narrative which should have strong grass-roots support across party lines in most countries. Political change must come through co-opting existing institutions and mainstream political parties: All political parties should be green parties.

Assaad Razzouk is chief executive officer of Sindicatum Sustainable Resources. This post is republished from Medium with permission.