Cars are the second most expensive investment after the family home, a status symbol and, in some cases — just visit a major motor show — a love affair.

Yet electric cars seem to polarise: people either love them or hate them, with little room for indifference. Why is this?

Electric cars will change the way we travel and the close relationship many of us currently have with our cars.

Most articles published about them seem to draw criticism. Sometimes this is justified, but — as I have seen with my recent articles on The Conversation — this criticism is mostly unfounded. This article responds to some common questions that readers have raised.

This is true for petrol cars too. The question, then, is to what extent electric cars’ usability is limited.

Electric cars can travel an average of 150km on a single charge, whereas the average daily distance driven (for any car) is just 32km. The problem is not so much about limited range, but range in combination with a relatively long charging time.

Tesla Motors has just recently demonstrated the feasibility of long distance travel with their Model S car. They completed the journey from Los Angeles to New York - a distance of more than 5500km - in just over 76 hours, including charging. This was made possible by the long range of their electric vehicles and a network of high-powered charging stations, which already exist in the US and are currently being installed in Europe.

And if 150km per day limits your lifestyle, there are plug-in hybrid cars available. One example is the Holden Volt, which can drive about 70km electrically on battery before switching over automatically to run on a petrol generator where longer distances are required.

Electric cars can be slow-charged from a standard power point at home or work, a process which takes about 10 hours.

But there is a much faster option: they can be charged to 80 per cent capacity in around 20 minutes at a DC fast charging station. This, of course, requires the kind of infrastructure that is widely available for petrol cars now with petrol stations, but still only available in limited areas for electric cars. (These are examples of some DC stations, but mostly slower AC charging stations in Perth, Brisbane, Melbourne and other Australian capital cities.)

Around 20 to 30 minutes on a DC charger is still longer than 5 minutes on a petrol pump - but the gap is closing.

Electric cars are more expensive in the upfront purchase price than their petrol/diesel counterparts. But one also has to consider the much lower running cost and almost negligible service costs over the years of ownership.

If one charges an electric car at home from an existing solar photovoltaic system, running it is virtually free of cost, as well as free of emissions.

Over 5 to 10 years of ownership, purchase price plus running cost for electric and petrol/diesel cars will even out; after that, electric cars will be cheaper. Electric vehicles are also expected to drop in price over the next few years. 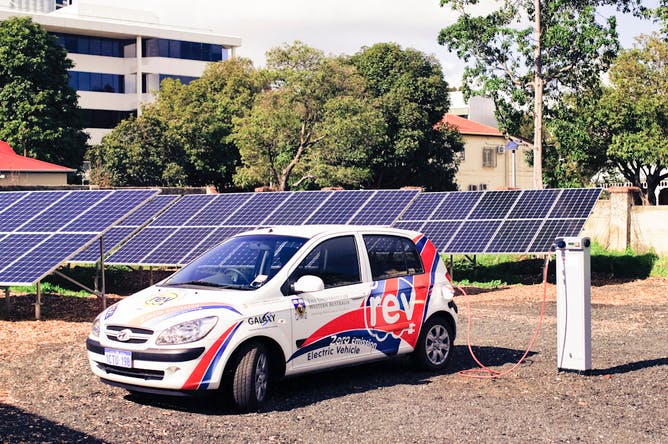 According to most studies, emissions of the most fuel-efficient new petrol cars are on par with average power generation emissions for electric cars charging from the “dirty grid” in most countries (predominantly using power from burning coal and gas).

However, electric cars can be driven completely emission-free in a number of ways. These include home-owners charging their vehicle from a solar PV system; paying for green power through an electricity retailer; or charging at an electric vehicle charging station that either has direct solar PV feed-in (much like our UWA/REV installation of EMC Solar in West Perth, shown above) or that is offset with grid-connected solar PVs.

As this article on The Conversation pointed out, public charging usage is almost exclusively during sunshine hours.

Another opportunity for electric cars to increase the amount of renewables on the grid is the use of wind energy at night. Wind energy can often not be used at night due to lower energy demand and base-load requirements of conventional power plants. If a large number of electric cars were to charge at night, existing renewable wind energy could be used instead of being wasted.

As for air pollution, widespread adoption of electric cars would significantly improve air quality within our cities.

CLAIM: They require more energy than they save

There is very little variation between petrol/diesel and electric cars in terms of the energy requirements for material and production.

Manufacturer BMW has even gone a step further to eliminate emissions from its production of electric cars, with four wind turbines feeding power directly into its new US$540 million Leipzig factory.

CLAIM: The batteries are toxic and don’t last

Standard batteries used in modern electric cars are either lithium-ion, lithium-iron-phosphate or lithium-iron-cobalt. These battery types are non-toxic.

Useful battery life for electric vehicles is around 10 years, after which the battery capacity will be reduced to 85 per cent, which is considered to be the limit for use in an electric vehicle.

After that, batteries will be good for another 10 years for things such as home energy storage, which would allow the use of locally generated solar PV electricity at night. After this time, the batteries are almost completely recyclable.

For those looking for answers about electric cars, I hope I’ve been able to clear up some of the most common myths around them. If not, add your comment below and I’ll try to address your question.

Today’s electric cars may not be suitable for everyone’s lifestyle and budget, while there are still factors limiting the number of people buying electric vehicles, including the lack of charging infrastructure. Because of this, Australia will take longer than other countries to adopt this technology.

Still, love them or hate them, electric cars are coming — and this time, they are staying for good.

Thomas Bräunl is professor at the University of Western Australia, Perth, where he directs the Renewable Energy Vehicle Project (REV), and he is technical director of the WA Electric Vehicle Trial and the leading chief investigator of the EV Recharging Project, which are both the first in Australia. This post originally appeared in The Conversation.