A rebuttal from the environmental group points out that, contrary to a report in the Singapore mainstream press, there is no such thing as ‘sustainable shark fin’.

Environmental group Worldwide Fund for Nature (WWF) has rebutted a recent story in Singapore’s local media that shark’s fin sold in the city-state are from sustainable sources.

The non-profit had published a recent study, in collaboration with anti-wildlife trade group TRAFFIC, on the shark and ray fin trade in Singapore, which The Straits Times covered in a story headlined ‘Nearly all shark’s fin sold here from sustainable source.’

The ST selectively reported the data in WWF’s study to position Singapore below Malaysia in a ranking of the world’s biggest shark fin traders. 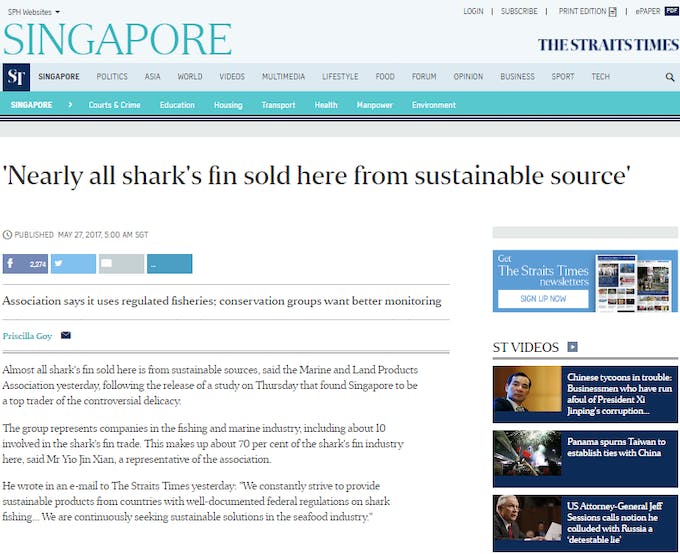 The newspaper used the volume of sharks caught rather than the value of the market to ensure that Singapore appeared to be less guilty than its neighbour in the assessment of a trade that is pushing many of the ocean’s top predators towards extinction.

After the article was published on 27 May, critics in social media were quick to point out that there is no such thing as a sustainable shark fin industry.

This is a trade that kills around 70 million sharks a year, using a method that is increasingly seen as needlessly cruel and wasteful; the shark’s fins are cut off and the animal thrown back in the water while still it is still alive, to die a slow and painful death.

Among those who protested online was Kathy Xu, founder of The Dorsal Effect and a volunteer of Shark Savers Singapore.

WWF wrote a rebuttal to the ST’s story in an opinion editorial titled Busting shark’s fin sustainability myths, published by the Straits Times on Friday.

The piece calls out a statement made in the newspaper by the Marine and Land Products Association (MPA), which represents shark’s fin traders supplying 70 per cent of the market in Singapore.

The MPA is quoted as claiming that the majority of the shark fin imported by Singapore comes from developed countries such as the US, Europe and Australia, with the implication being that the market is therefore sustainable.

But in the rebuttal written by WWF Singapore’s chief executive Elaine Tan, it is pointed out that just because the shark is caught in a rich country with tougher laws in place to govern general fishing practices, this does not mean that it was sustainably harvested.

A shark fishery can only be labeled sustainable if there is a system that traces the shark from where it was caught to the seller - and no such systems exists anywhere.

The only shark fishery that has been classified sustainable by international standards body Marine Stewardship Council is for spiny dogfish in the United States. In this case the shark is used mainly for its flesh, and the fins regarded a lower quality by-product.

Tan also notes that the claims of where Singapore sources its shark fin from are wrong.

According to Singapore’s own trade data, the city-state’s top import markets are Spain, Namibia, Uruguay, Hong Kong and Indonesia - and none of these markets have sustainable shark fisheries.

She also countered that it even if all of the animal is used, rather than just the fins, it is still incorrect to say that it is sustainable.

An industry that kills around 8,000 sharks an hour, contributing to a 98 per cent reduction in shark populations over the last 15 years, and pushing 30 sharks species to the point of extinction, cannot be considered sustainable, WWF argued, particularly when there is little to no information on the source, type of shark or the numbers fished as trade crosses borders.

The species of shark Singapore trades in that are considered endangered by the Convention on International Trade in Endangered Species of Wild Fauna and Flora (CITES) include the Oceanic Whitetip Shark, the Basking Shark, the Scalloped Hammerhead Shark, and the Porbeable. Shark fin is a luxury dish commonly eaten at Chinese weddings and banquets. 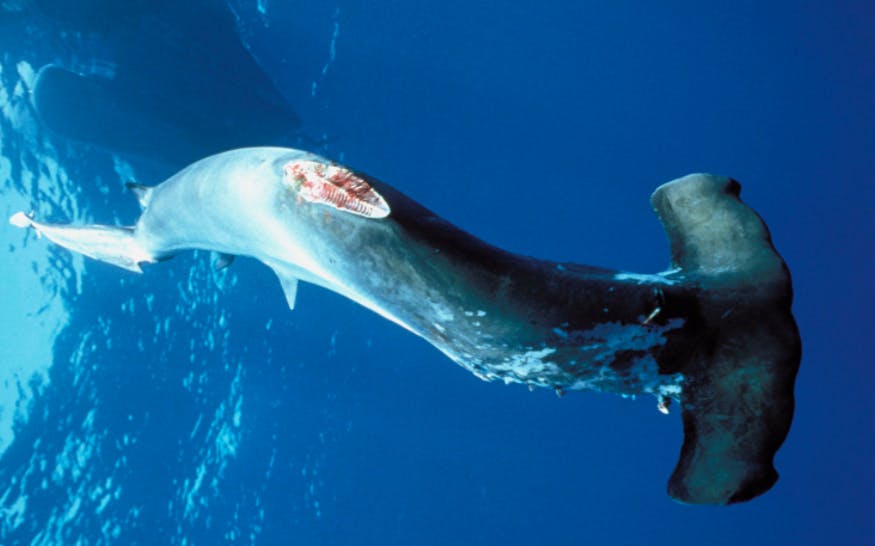 A Scalloped Hammerhead Shark, one of the endangered species traded in Singapore, drifts to the bottom of the ocean after being finned. Image: WWF

Consumption of shark fin has declined globally in recent years owing mainly to belt-tightening and anti-corruption measures by China’s civil service, a growing awareness of the cruelty behind harvesting sharks and ongoing campaign efforts from NGOs; consumption has dropped by 50 to 70 per cent in China, according to a report by WildAid.

Though Singapore is a major trading hub for shark fin, the local appetite for the dish appears to be on the decline. A report from WWF in January found that a rise in awareness of shark protection and environmental concerns might be putting Singaporeans off the dish.

In February, WWF released a report that found that Singaporeans would support government legislation to curb shark fin consumption.

In WWF’s report, the NGO calls on the Singaporean authorities to put procedures in place that allow better tracking of species and trade in shark fin volume.

It notes that while Hong Kong - the world’s largest trade in shark fin - is in the process of upgrading the traceability of the industry, Singapore “has some way to go”.

“With better monitoring of the global shark trade through these measures, businesses - including Singapore’s shark’s fin traders - can have more confidence about the source of their products, including basic information on species and legality,” the report reads.

“Will we ever be able to fish sharks sustainably? Yes, but in the near future, the volume of sustainable products will still be a tiny fraction of the global demand. Until shark fisheries can prove that they can be sustainably managed and can track their products to end consumers, the only way to protect our oceans is to greatly reduce our demand.”