Why is the media under-reporting climate change?

The media needs to do more to communicate the risks of climate change to tackle dangerously low public awareness in the English-speaking world, climate experts said in an interview at the offices of BP.

Low public awareness of the risks of climate change in the English-speaking world, perpetuated by the media’s inadequate reporting of climate-related stories, is currently the biggest obstacle for the transition to a low-carbon world, leading climate scientists have suggested.

Sir David King, the United Kingdom foreign secretary’s special representative for climate change, said in an interview with Eco-Business last week that despite the growing number of climate-related catastrophes, the media was failing to make the connection to climate change.

“We need the public to be aware that children and even young adults alive today are going to experience the transition to a much more challenging world - unless we make major changes now,” he said.

“Politicians and the private sector respond to the public. So the most important thing is to raise awareness of the risks we’re facing among consumers,” he added.

King was asked if it would take more serious climate-related events for the message to sink in about climate change, to which he replied: “How many more incidences do we need?”

“Each year we see more and more [of those]. Now, here is the problem: why is the media not reporting them as caused by climate change?”

“Instead of reporting each incident as if it was isolated, why can’t the media develop this notion that this is the portent of things to come?” he said. 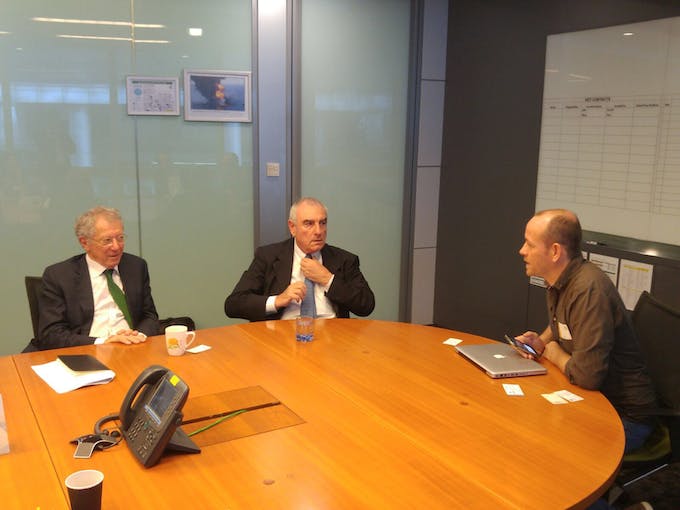 King was being interviewed alongside Philippe Joubert, senior advisor and special envoy for energy and climate for the World Business Council for Sustainable Development, who said that there was a need for the media to report more on the scientific “certainty” of climate change.

This, said Joubert, is often diluted by the nature of social media, which has changed the way news is consumed, with a decline in attention spans meaning people focus more on headlines than in-depth content.

“Science has taken a long time to become clear [on climate change] for good reason: doubt is a scientific instrument for progress. Scientists use doubt to make progress. But when you mix doubt with Twitter culture, you generate doubt instead of progress,” said Joubert, who advises CEOs on sustainable development.

“This combination has meant a lot of time lost,” he said. “But in the last five years, science has been very clear, and we are now going to media and saying why don’t you translate this certainty for the public?”

A lack of understanding of the science behind it, and an over-focus on issues such as corruption, economic growth and political conflict, has sidelined climate coverage, a recent report from Asian Media Information and Communication Centre showed.

Meanwhile a recent story from the world’s best-read online newspaper, Mail Online, was widely criticised for trying to undermine climate science with a testimony from a single source.

King and Joubert were interviewed at the Singapore headquarters of oil giant BP, where King pointed out that two decades is “all the time we have” to make the switch from a fossilised economy to one based on renewable energy.

He said that the process of taking carbon out of the atmosphere must begin if the global temperature is to be capped at 2 degrees celsius above pre-industrialised levels, the safe level scientists say will prevent catastrophic consequences.

King, who had just returned from a trip to Indonesia, said that deforestation was currently the most important climate change issue.

He pointed to the GNU programme - a joint agreement between the British government, Germany and Norway made at COP21 in Paris to reforest an area the size of India by 2030 - as a significant step to achieving net zero emissions.

“We need more carbon sinks, otherwise we’ll never achieve it [a cap on global temperature increases]. And of course we need to turn our energy systems and our entire economy to the net zero [emissions] direction - which is already happening,” he said.

Joubert added that carbon would have to be removed from the atmosphere, and the only way to do it was by absorbing carbon dioxide, and generating electricity through carbon capture and storage. This refers to the process of locking in energy from fossil fuels.

“This is the only way that we know how to generate negative CO2 at scale, and is absolutely central to the strategy to fight climate change,” he said.

Climate change, said King, presented the business community with “no less than the biggest opportunity the world has had for many decades.”

The former advisor to the Tony Blair government on climate change pointed to International Energy Agency predictions that the market for clean energy technology would reach US$2-3 trillion a year by 2020, and $53 trillion by 2035.

He added that the fossil fuel sector would “definitely lose” if it did not make the transition to renewables, and they would be beneficiaries if they used their resources to make the switch.

The price of clean technologies, notably wind turbines and photovoltaics, has become competitive with new coal-fired and gas-fired installations globally, but there remained “missing technologies” that need to be developed, King said.

The British government, he noted, had joined forces with 21 other countries for the Mission Innovation project, and would be spending US$15 billion a year to research and develop new renewable technologies, and that spend would rise to $30 billion by 2030.

The project, he said, will “de-risk” new technologies for the private sector, so that they could more easily brought into the marketplace. A full range of clean energy technologies would be ready for rollout globally by 2025 to 2030, said King.

Much of the focus is on Africa and Asia, where clean technologies will enable places without electricity to “leapfrog” a reliance on fossil fuels.

King voiced his frustration that many of Asia’s emerging economies such as Indonesia had plans to build coal-fired power stations to support rapid economic growth and increasing energy demands.

“Go to Beijing or Delhi today, and you’ll see the drawbacks of a reliance on fossil fuels. You can barely breathe in those cities,” he said, adding that Asia is the only part of the world where coal-fired power stations are still being built at scale. A recent report by Greenpeace warned that up to 70,000 people could die a year from air pollution if plans to build coal-fired power stations go ahead.

Joubert, who is also executive chairman of the Global Electricity Initiative at the World Energy Council (WEC), said that the continued construction of fossil fuels-based energy systems in emerging markets caused him to “lose his patience” after 30 years of working in the sustainability sector.

He added that “the big fight” in the war with climate change was pushing for decentralised power with solar and wind alternatives to fossil fuels to meet the rising energy demands of developing countries.