Villages die as community makes way for coal in Germany

Once the Garzweiler opencast mine is finished, 20 villages will have gone.

For four generations, Portz family life has focused around a quaint, red-brick farmhouse and the fertile fields beyond, ready for early harvest after this summer’s high heat.

Soon, the family will pull its last potato and a final spike of grain from the rich Immerath soil.

Big coal is coming to replace their agrarian way of life.

The Portz matriarch puts on a brave face as she folds laundry in her flower-packed yard, the ground strewn with toys.

“It’s always jolly here,” Christiane Portz told the Thomson Reuters Foundation, interrupted by a chatter of grandchildren who make noisily for the stable.

It is absolutely unacceptable that coal companies like RWE still want to destroy homes and nature for dirty lignite.

The singsong voices, the spill of toys—everything will go when the home is bulldozed and replaced with a vast coal mine.

Immerath, once a small village of 1,200 in Germany’s western frontier, host to both farms and industry, has fallen quiet.

The Portz family is one of the last households still in situ; they live among piles of rubble after neighbouring families were resettled 12 k west at New Immerath.

Roughly 1.3 billion tons of lignite—a soft coal—were discovered long ago under the village and its surrounding land in Germany’s North Rhine Westphalia state. Few locals took the threat seriously, so life continued until development of the mine became reality and villages were lined up for destruction.

Immerath is one of the last to make way for the expansion of Garzweiler opencast mine, which is run by giant German energy provider RWE, supplying one-third of Germany’s overall power.

Once Garzweiler is finished, 20 villages will have gone.

Under the scheme, some 5,000 people will be forced to move, compensated with either a new house or cash. RWE says almost half of the locals just take the money.

“Our expectation is that Garzweiler will be open until the middle of the century,” RWE press officer Guido Steffen told the Thomson Reuters Foundation. “Germany is making radical changes, but even in the long run, in order to provide energy, we can’t forgo conventional power plants.” 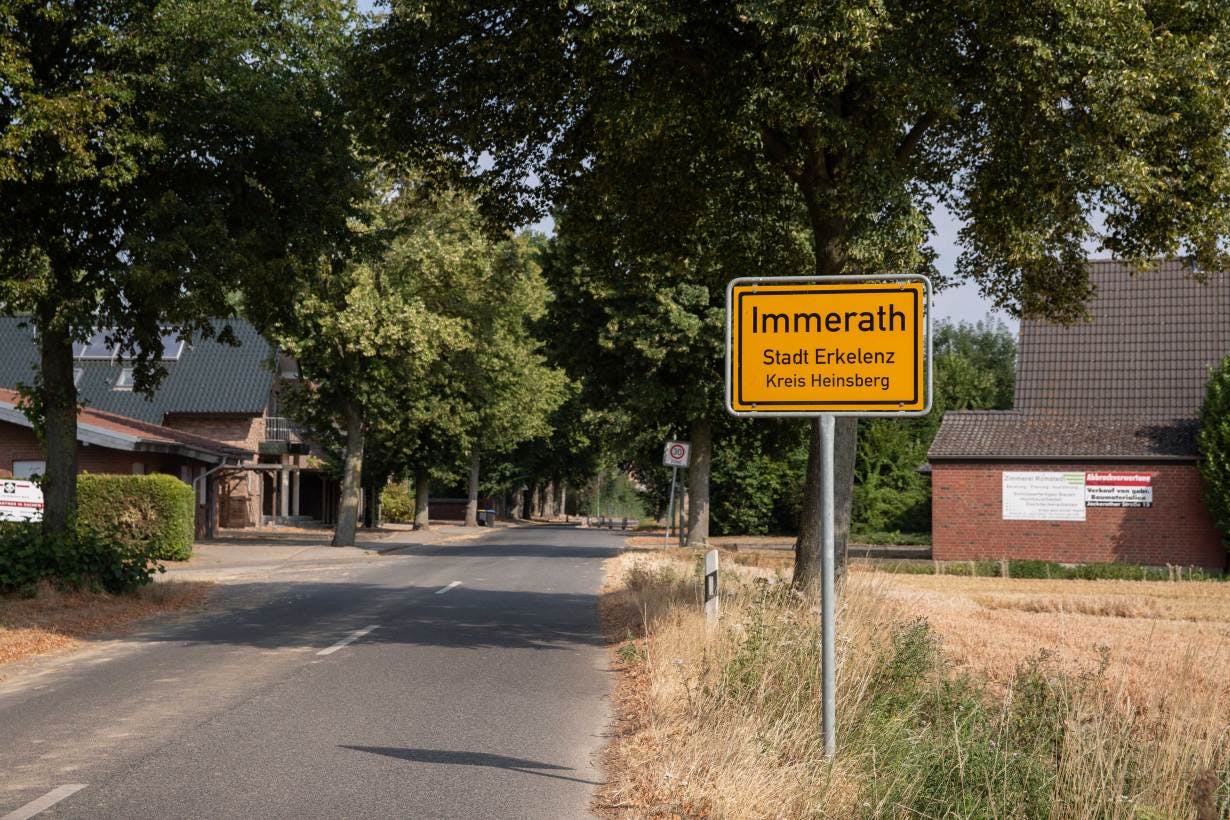 A sign reads the name of the village upon entering in Immerath, Germany on 19 July 2018. Thomson Reuters Foundation/Stefanie Glinski

Once finished, the company website says the mine will cover an operating surface of about 32 sq km. The size of the approved mining field is 114 sq km, it says.

The plan to expand was no shock for locals. It was back in the 1960s when nearby villages first made way for coal extraction, despite loud community protests, and protesters say the march of commerce over community continues nationwide.

Germany’s Environmental Agency says the Federal Mining Act prioritises the extraction of raw materials over the interests of the common good.

Since 1945, hundreds of villages yielded to a growing need for energy, with 40 per cent of Germany’s power coming from coal.

RWE, Europe’s top emitter of carbon dioxide (CO2), admits lignite is cheap to produce but harmful for the environment.

What’s left of Immerath—and other nearby villages—is eerie streets and abandoned houses. The noise of the bulldozers is omnipresent as they rumble through the ghost towns.

Immerath’s village church—lovingly dubbed the ‘cathedral’ by locals who financed its construction 130 years ago— was demolished in January. In New Immerath, a simple modern church has usurped the imposing, towered cathedral.

The Portz family is due to leave in September.

“We’ve known the day would arrive and we all need energy.”

Portz insists she is positive about her new home, too.

The old, ivy-covered farmhouse will be swallowed by the mine and the family will move to three modern houses 12 kilometres away.

Her husband, who grew up on the family farm and has watched two more generations do the same, does not take change lightly.

“It’s a nightmare. I think about it constantly,” said her husband, who did not want to give his first name.

Aside from the human cost to close-knit families like his, campaigners count the wider environmental fallout.

“It is absolutely unacceptable that coal companies like RWE still want to destroy homes and nature for dirty lignite. It is inefficient, CO2-intense and not able to be a flexible partner for clean renewables like wind and solar power,” said campaigner Anike Peters of Greenpeace.

Along with local residents, Greenpeace and other groups have protested against the forced resettlement and say they plan to step up the demonstrations.

“Local resistance against lignite is stronger than ever. We want the coal to stay in the ground,” said Johanna Winter of Klimacamp, an initiative organised to protect the environment.

More protests are planned this month against what Maja Rothe, also of Klimacamp, calls “a clear example of the rules of capitalism putting boundaries to democracy.”

It is due to be destroyed in 2023 and local agronomist Elionore Kreins is fighting hard for her farm’s survival.

“During a first meeting with RWE, a representative told us that ‘our emotions are out of place.’ Immediately after, we decided to get legal help,” she told the Thomson Reuters Foundation from a wooden bench at her farm.

Costs are steep: up to 250 euros ($290) an hour and the family has not yet sold its land. Once sold, RWE finances the resettlement.

“We are expropriated and our lifestyle will have to change. Keeping animals in town is allowed in Berverath, but it won’t be possible in New Berverath, so farmers have to rethink,” she said. Both her children and parents live on the farm and Kreins takes care of her elderly mother. The rules mean her animals cannot figure in her new life.

“It’s true,” Steffen admitted. “The new villages have to abide by new building regulations. The old villages will look like modern suburbs with detached houses and small gardens.”

Lignite extraction is due to start in the village by 2028, and will continue until about 2045. Once finished, the area will be flooded with Rhine water and turned into a lake.

“The destruction of villages like Berverath must be completely avoided,” said Greenpeace’s Peters. “Germany must phase out coal until 2030 at the latest.”

Back in Immerath, a small house still stands at the village entrance. A sign above the door reads “Heimat”—roughly translated as ‘home’. But this very German concept also carries a sense of ‘homeland’; a feeling of belonging and roots. Empty and lifeless, the house now sits with its blinds down and its driveway overgrown, waiting for the bulldozer to call. ($1 = 0.8625 euros)