The UK can phase out coal while keeping the lights on, according to a new report commissioned by Conservative thinktank Bright Blue.

The government has said it will close coal by 2025 and restrict its use from 2023, on the condition that enough gas-fired capacity is available to ensure security of supply. (Recent reports have suggested that the government may water down this proposal, but it has since reaffirmed its commitment.)

Many, including Bright Blue, welcomed this proposal as a key step to reducing the UK’s greenhouse gas emissions.

Others questioned whether it would threaten the security of the UK’s energy supply, leading to the lights going out as coal comes offline without sufficient replacement from other sources. For instance, the Institution of Mechanical Engineers warned that the planned coal phase out could leave the UK with insufficient electricity.

New research by Aurora Energy Research suggests the opposite. Even in the most difficult circumstances, phasing out coal will not leave the UK in the dark due to lack of electricity. Committing to do it early could actually increase security of supply by raising investor confidence, according to a set of policy recommendations based upon the research.

While the government has backed a phase out of coal, there remain numerous uncertainties about the UK’s power supply through the 2020s. The rate of renewables growth, developments in energy efficiency and the deployment of technologies such as electric vehicles could all dramatically alter how much energy is consumed and how it is produced over the coming decade.

“The key forecasting challenge for decision-makers is, therefore, how much coal- and gas-fired generation will be needed to close the gap between electricity demand and other types of generation in the 2020s,” says the report.

Aurora’s modelling looks at how the UK could cope under various scenarios. Each case looks at the size of the gap left by coal – and how much gas would be required to fill it. It views these cases from the perspectives of security of supply, emissions and cost.

The analysis was carried out using the Aurora Energy Research Electricity System model, which recreates the British power sector while taking into account the economic constraints of the capacity market. Their research makes certain assumptions about the progression of the UK carbon price, the EU Emissions Trading System and fuel prices. 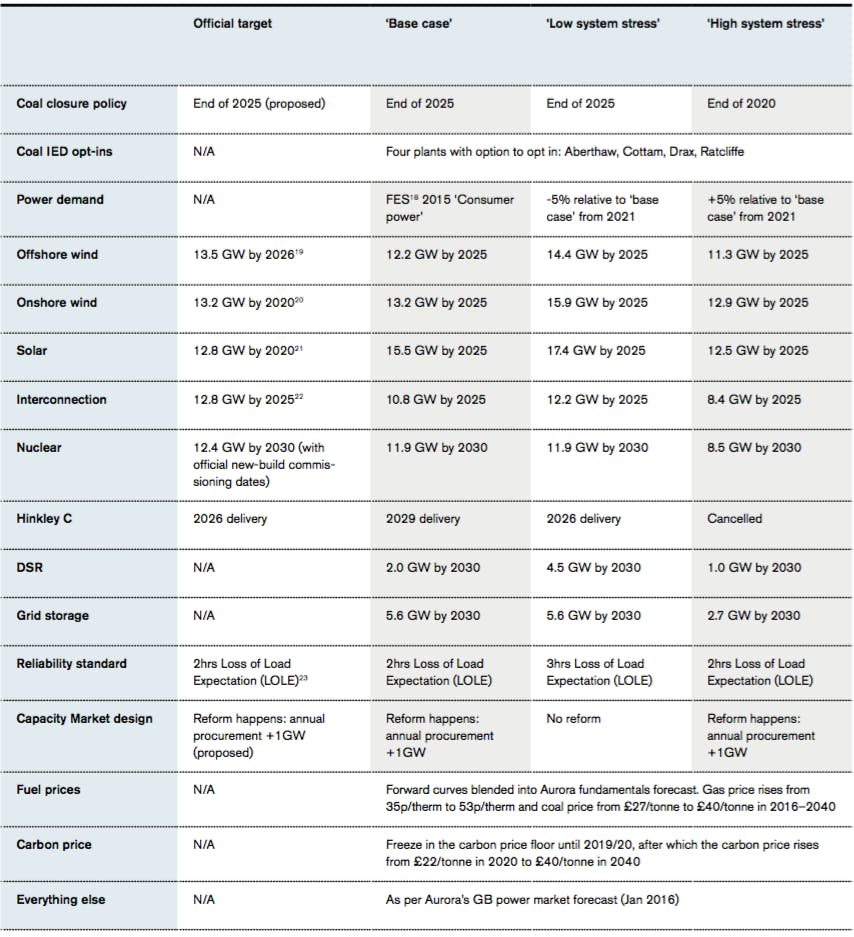 The assumptions that underpin each of the scenarios in which coal is phased out. Source: Keeping the lights on: security of supply after coal.

In the “base case” scenario, it is largely business-as-expected. Renewables, nuclear and interconnector capacities grow according to market expectations, and Hinkley Point C nuclear power station is delivered in 2029, three years behind schedule. Coal remains operational until 2025, providing just over 7 gigawatts (GW) throughout this period, thanks to higher procurement through the capacity market.

What would such a scenario mean for gas? It means very little up until 2025, as hardly any additional gas plants are required beyond the 5GW that have already been planned up to 2019, the report says. As coal stays online, there is no need for new gas to replace it. Beyond this, however, keeping a secure supply of power means building a lot of new gas as coal exits the system — nearly 10GW between 2026 and 2028. 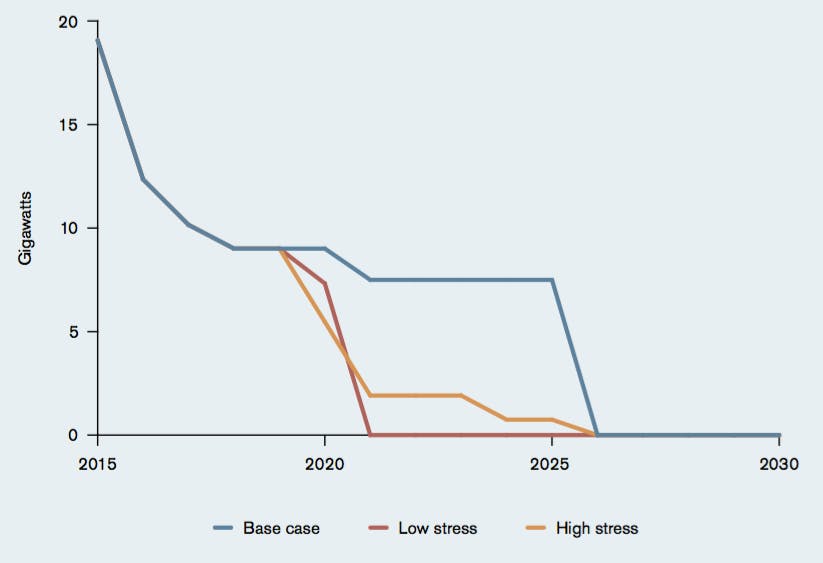 The “low stress” scenario offers the most optimistic outlook for renewables, nuclear and interconnectors, which exceed expectations, and are coupled with energy storage and measures to reduce consumption. The Hinkley Point power station is delivered on time in 2026. Coal is forced to close in 2025, though most will actually retire around 2021 for economic reasons. Total coal capacity falls to below 2GW by the end of 2020.

This all equates to a reduced role for gas through the 2020s, which is squeezed out as alternative forms of power come online. Another 8GW of new gas will be required in the next 15 years, in addition to what has already been planned, but less of this new capacity will be large scale combined cycle gas turbines (CCGT). Instead, the requirement will be for small scale, flexible plants. 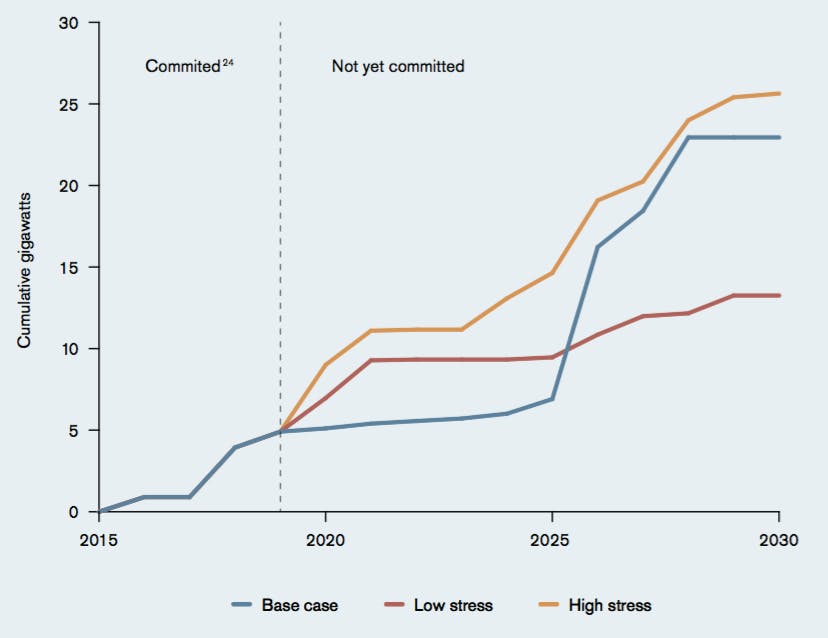 Total new-build gas capacity, 2015-2030 under various scenarios. “Committed” means that it has already being secured through the capacity market auctions. Source: Keeping the lights on: security of supply after coal.

Under the high stress scenario, demand for power increases, but the rollout of renewables, nuclear and interconnectors is slow. Hinkley Point C is cancelled, and all coal plants close by the end of 2020.

Despite this, the immediate need for new gas is “surprisingly low”, says the report. No new gas is required between 2016 and 2020, beyond what is already committed, as 46 per cent of the gap left by coal is filled by extending the lifespan and increasing utilisation of existing gas plants.

However, from 2020 to 2025, around 10GW of new-build gas will be needed, and another 11GW in the second half of the 2020s, to deal with gas plant retirements, high demand, stagnating renewables and a slump in nuclear capacity.

It is worth noting that Aurora’s modelling doesn’t include any constraints based on how much new gas can feasibly be built. However, the report notes that, during the “dash-for-gas” in the late 1990s, the amount of new build CCGT exceeded 3GW per year, which it suggests would allow for the necessary capacity additions also in the 2020s.

Meeting electricity demand is one challenge — doing it cheaply and cleanly is another.

In addition to modelling whether the UK is able to fill the gap left by coal, Aurora has also modelled the cost of each scenario, and whether the UK would still be able to meet the carbon intensity target of 100 grams of CO2 per kilowatt hour by 2030, recommended by the Committee on Climate Change (CCC), which serves as the government’s independent advisory panel.

This intensity level will provide the lowest cost path to meeting the UK’s 2050 climate change target of an 80 per cent reduction in greenhouse gases, according to the CCC.

In the “base case”, the typical annual household electricity bill is forecast to average £241 over the next 15 years, excluding profits and taxes.

Neither of the other two scenarios involves a large change in price compared to this baseline, but there is a slight difference.

The “low stress” scenario is £2.40 cheaper — it is worth noting that, while policy costs including Contracts for Difference, Renewables Obligation Certificates and Feed-in-Tariffs are higher due to the higher installed renewables capacity, they do not entirely offset the reduction in electricity and capacity prices that are also brought about as a result of this scenario.

However, the average bill rises by £1.20 under the “high stress” scenario, as electricity and capacity prices rise more than the policy costs mentioned above. Greater dependency on gas imports also makes household bills particularly sensitive to the price of gas.

Only the “low stress” scenario sees the UK meet its carbon intensity target by 2030. The increase in renewables, more interconnection and lower demand means that CO2 intensity falls steadily, with the 2030 target already met by the mid 2020s.

In the “base case”, CO2 intensity initially increases in the 2021-2025 period as increased generation from coal plants fills the gap left by retiring CCGTs. Only when this 7GW of coal retires at the end of 2025 does the CO2 intensity start falling again, approaching but not quite meeting the 2030 recommendation.

Under the “high stress” scenario, stagnating zero-carbon generating capacity means that the CCGT fleet must grow and increase production. This would halt and even reverse the decline in CO2 intensity by the mid-2020s, the analysis shows. The recommended target will, therefore, be exceeded by more than 50 per cent.

The graph below shows the carbon intensity of each scenario in more detail. 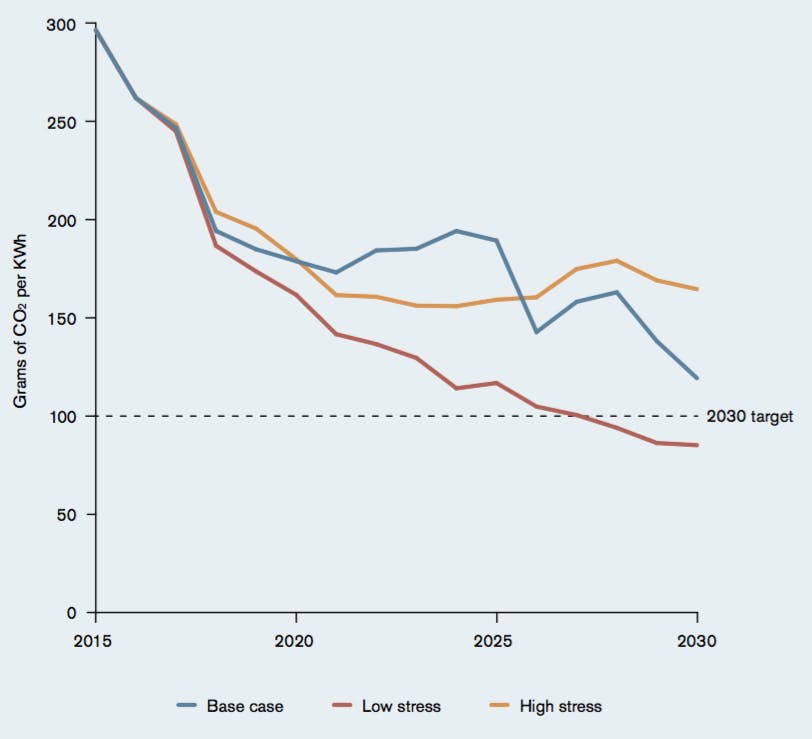 The report concludes that the energy security concerns over the proposed coal phase-out are unfounded, and that this policy is both achievable and desirable. But the benefits, both financially and for the climate, will depend on other factors. The speed at which low-carbon technologies are deployed, and the amount of gas required to fill the gap, will determine the cost and the benefits to the climate.

Bright Blue has drawn a number of policy recommendations from Aurora’s research, and suggests that the 2025 target should be brought forward to 2023, as this will give investors greater certainty. It concludes:

“There is a significant political legacy of the UK being the first industrialised country and first to use coal for electricity to be the first major country to completely phase it out. It is a radical and ambitious conservative approach to dealing with climate change and air pollution. Closing coal is also a cheap and rational way of reducing carbon emissions.”

This story was published with permission from Carbon Brief under a Creative Commons license.