Two years after #MeToo put a spotlight on gender inequality, how is Asia investing in women?

The field of gender lens investing is rapidly growing in Asia, where the female labour force is rising and women are on the verge of wielding immense investing power. However, challenges remain when it comes to women's leadership and creating inclusive and safe spaces for women.

More than two years after the #MeToo movement made headlines and women’s rights became a front and centre issue globally, the world of business and finance appears to be waking up to the benefits of inclusivity and being mindful of women and their critical role in the economy.

Today, as more companies seek to limit harm against women and generate social and environmental impact, gender lens investing (GLI), has become one of the most rapidly growing segments of impact or sustainable investing.

More than just putting a female perspective on finance flows, GLI aims to accelerate gender equality and unlock economic growth through the increased participation and leadership of women.

In a 2015 impact investor survey by J.P. Morgan, an investment bank, about one-third of the survey’s participants explicitly targeted gender equality or women’s empowerment as a key theme for driving gender equality and increasing financial returns, while a study by the Global Impact Investing Network (GIIN) and advisory firm Intellecap revealed in 2018 that GLI is on the rise in Southeast Asia, where low financial inclusion is a major obstacle to women’s economic empowerment.

However, even though businesses and financial institutions are increasingly recognising the large potential of gender lens investing, women remain heavily underrepresented in leadership positions in the region.

How does GLI create an enabling space for women-led businesses?

GLI integrates gender-based factors into investment decisions, which translates to investing in women-owned or women-led businesses, enterprises that advance gender equity in the workplace and those that offer products and services that provide value for women.

It also includes investment in businesses that help fight social issues that disproportionately affect women and girls, such as access to education, sexual harassment and violence.

“It’s very well known that not a lot of capital goes to female-led ventures, and there is a population out there that is underserved because of that,” said Amra Naidoo, co-founder of Singapore-based venture capital fund and startup accelerator Accelerating Asia (AA).

“From a business perspective, you’re also missing out on a massive opportunity with the female market because there are not enough female founders out there creating solutions for women. It’s hard to expect men to create these solutions.”

More than 40 per cent of AA’s start-up portfolio are female-led ventures, while it is the only venture fund in the region with a female general partner — Naidoo herself. This year, four out of ten start-ups in AA’s accelerator program had women co-founders, including an on-demand beauty and lifestyle services platform called Romoni.

Based in Bangladesh, Romoni started off as a Facebook page in 2016 after founder and chief executive officer Armin Zaman Khan faced challenges scheduling an appointment with a hairstylist. After talking to the beauticians in her neighbourhood, she found out that most of them provided home services to their clients after work hours to earn extra income.

Khan then connected the dots and signed on a couple of freelance beauticians that could work on-call from her page to cater to the growing number of corporate women and mothers who preferred salon services in the comfort of their homes.

Not a lot of capital goes to female-led ventures and there is a population out there that is underserved because of that.

Since then, Romoni has grown to become the one-stop destination for the beauty and lifestyle needs of women in Dhaka and a credit facilitation platform for micro and female entrepreneurs in Bangladesh. Khan hopes to further build a business incubation platform that will help women become full-fledged entrepreneurs with knowledge of fintech and access to growth capital and other financial services.

“In the context of Bangladesh, it’s hard to become an entrepreneur, because you normally don’t get much family support and you have to be completely independent,” said Khan. “It’s especially tough for women entrepreneurs, which is why there are so few. You have to go to places, meet people and make yourself visible. Our society is not friendly to girls who are that visible and mobile.”

She added that successful female entrepreneurs are typically supported by a network of other businesswomen.

“We have been successful in making the women we bring on board financially independent and able to grow their businesses. But their community of fellow entrepreneurs has definitely made them stronger,” she said.

“There’s a very strong female presence, especially in emerging markets, where women are doing really incredible things. Also due to the nature of where we are in the world, with challenges such as climate change and other development issues, you’re generally doing good in some way and solving a fundamental problem by starting a business in this region,” echoed Naidoo.

Research has shown that other than access to finance, the most common obstacles to the development of women’s entrepreneurship in Southeast Asia is the prevalence of inherited customs and social norms which create specific pressures on women, such as keeping work confined to the home.

According to research, even though female participation in Asia’s workforce has grown to over 40 per cent — higher than the global average — women in leadership positions in Southeast Asia remains low, with the exception of the Philippines and Vietnam. In the entire Asia Pacific region, there is only one woman in leadership positions for every four men.

In Vietnam, female-owned businesses made up 30 per cent of total enterprises in the country in 2015, which the government hopes to increase to 35 per cent this year, while the Philippines is leading in gender equality in the workplace and has a female-to-male leadership ratio of 0.96. 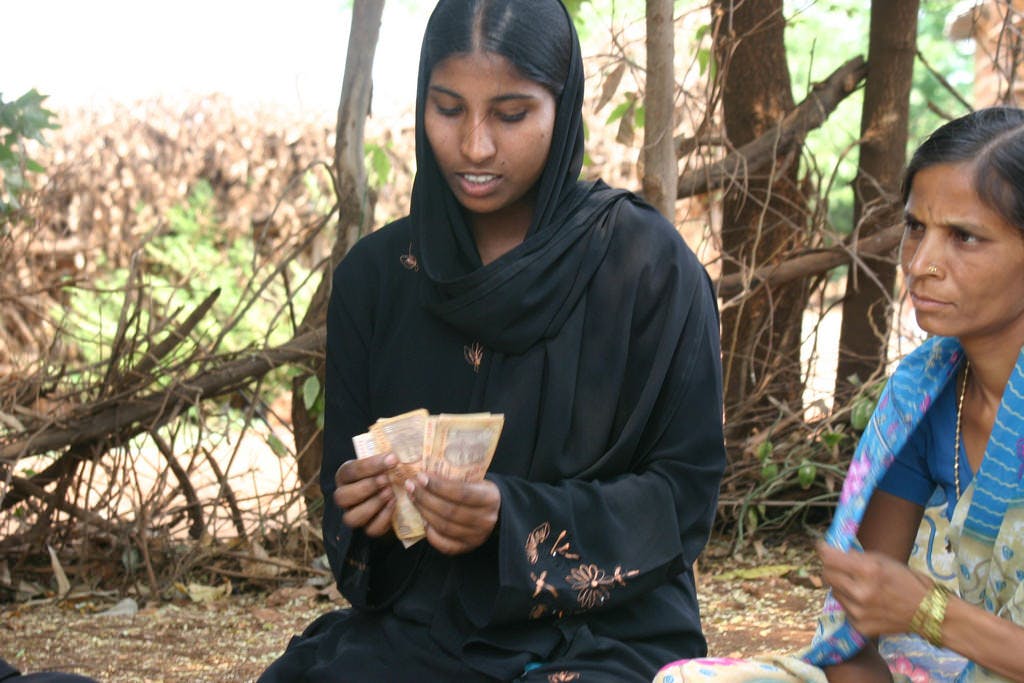 A woman counting money in Karnataka, India. Image: ILO in Asia and the Pacific, CC BY-SA 2.0 via IFPRI Flickr

Why investing in women matters

Studies show that women drive 70 and 80 per cent of all consumer purchasing, especially because women are often in charge of making household purchasing decisions.

“Most of what happens in the home, for example what food to cook and what needs to get fixed, are decisions made by women. And if you look at market statistics, it is difficult to win over female customers but they are the most loyal,” said Khan, noting that the women-focused industry in her country has boomed over the last five to six years.

“In Bangladesh, this is heavily influenced by the fact that average incomes have risen. By 2025, we are going to have more than 25 per cent of the population above the poverty line and women will want to upgrade their lifestyles and have branded clothes, cosmetics and good quality services,” she said.

If a company wants to be stronger and more responsive to customers’ needs, it has to have gender diversity in its leadership, which means making boards more gender-balanced, said Caterina Meloni, founder of Connecting Founders, an advisory firm that helps women-owned businesses raise capital in Southeast Asia.

Research from McKinsey has also found that the more gender diverse a company is, particularly at the management level, the more profitable it is likely to be.

“Women consumers have completely raised the bar in what they expect out of products and services. And that means that companies that don’t have women in decision-making positions will have difficulties hitting this bar because the best people to truly understand women’s needs are women,” said Caterina, adding that even in industries where the majority of customers are women — fashion and cosmetics — men still dominate.

Removing gender bias in the workplace

In a 2018 interview with Anna-Karin Jatfors, deputy regional director for United Nations Women for Asia Pacific, she revealed that the impacts of sexual harassment and violence on women’s mental and physical health are proven barriers to women’s employment and performance at work. She also linked the lack of gender diversity on boards and in the workforce to high incidences of workplace harassment.

However, ever since the #MeToo movement exposed rampant injustices against women in the workplace and generated discussions around sexual assault and harassment, businesses and organisations, particularly in the United States, have worked to introduce or refine their codes of conduct to bring about safer and more inclusive spaces in their offices. 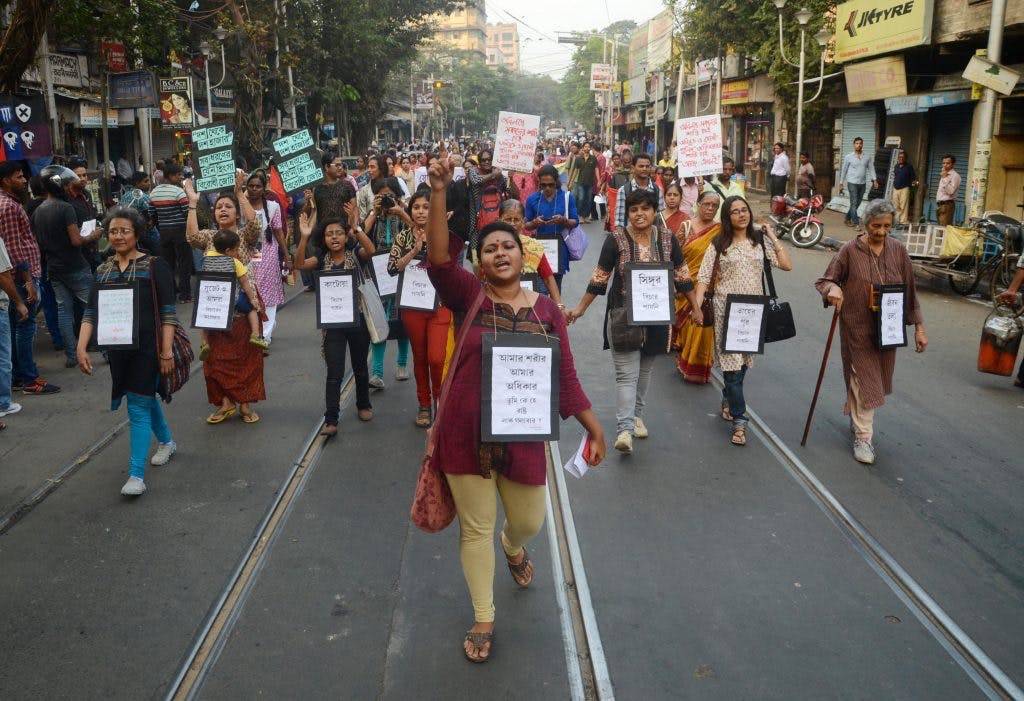 Indian women activists participate in a protest rally to fight sexual violence against women in Kolkata, India on December 7, 2015.

“Awareness is the best thing to have come out of [the #MeToo movement]. When it’s at the front of people’s minds, and companies are starting to look at their own policies and practices, people will start thinking about how they contributed to these systemic problems and what they are going to do about it,” said Naidoo.

In her company, Naidoo is introducing a Gender Advisory Group in a bid to advance gender equality in the start-up ecosystem in Asia. The group serves to provide advice on opportunities related to gender equality by bringing together professionals and experts from a range of industries and backgrounds such as tech, investment, academia and not-for-profit work.

Besides focusing on a gender lens approach to investing, Naidoo hopes that the group can create a platform for mentoring and women’s leadership, as well as precipitate a safe ecosystem for women in the start-up space.

“It’s the way that society has been conditioned to think about women’s work,” said Naidoo on why women face more barriers in business. “Across every industry, you start to see women dropping off when they get to certain level and that is because of so many different factors such as access to childcare and unequal pay. There are so many elements in the system that work against women.”

“We’re always thinking — how can we reduce some of those barriers within our own ecosystem in order to make it easier for women to access those opportunities out there?” she said.