The simple, yet elusive, key to fighting the climate crisis

Preserving and restoring forests is an effective step toward mitigating climate change, and comes with a host of other benefits.

A new scientific report finds human behaviors are driving the extinction of non-human species at a rate so severe that the subsequent disappearance of life will soon be a threat to human health and prosperity. Habitat destruction on land, over-fishing in the seas and overconsumption across much of the globe, among other things, now threaten to extinguish up to a million species in the near future.

The hundreds of scientists who produced the landmark United Nations assessment say myriad solutions are needed to address and, hopefully reverse, this trend. Underpinning much of the loss is the growing global impact of climate change. One of the major tactics at humanity’s disposal is effectively managing and restoring the world’s forests—preservation and conservation efforts that could, quite literally, change the world.

To see what can be preserved — or lost — look at a Google Earth image of the Rio Coco river, which forms much of the border between Honduras and Nicaragua. Toward the east, the river cuts through the Mesoamerican Biological Corridor, also known as La Mosquitia — one of the largest contiguous forest systems north of the Amazon. Dubbed the “Amazon of Central America,” it is home to several indigenous groups, is a hotspot of biodiversity and contains a trove of archeological wonders — like a massive undiscovered pre-Columbian city. The difference between intact forests on the Nicaraguan side and degraded hills on the Honduran side is quite apparent.

“Forests like La Mosquitia preserve biodiversity, mitigate climate change, are important for watersheds, disaster resiliency and provide sustenance for people that live in them — in short, they provide a huge array of ecosystem services,” Says John Polisar, program officer at the Wildlife Conservation Society. ”You need to protect the forest from cattle ranching and narco-deforestation, but you also need to focus on how to make sustainable livelihoods from the forest. They go hand in hand.”

This is the central dilemma for climate scientists in regards to land in general — and especially forests. They can both sequester large amounts of carbon in things like trees and soil, but also be a huge source of CO2 when that carbon is lost through activities like agriculture, logging or wildfire.

You need to protect the forest from cattle ranching and narco-deforestation, but you also need to focus on how to make sustainable livelihoods from the forest. They go hand in hand.

Data from Global Forest Watch shows that the planet lost an area of primary rainforest the size of Belgium last year, the fourth-highest year since record-keeping began. This puts humanity further out of reach of limiting average global warming to 1.5 degrees C, a temperature increase above which most experts agree that the survival of civilisation as we know it will be jeopardised.

A new book published by Springer Nature presents a pathway to meet the internationally recognised goal of limiting planetary warming to 1.5 degrees C. As part of the study, scientists studied scenarios that avoided deforestation and the role that restoration of intact ecosystems would need to play.

“What we have done is the first global study quantifying the restoration of degraded forests to intact ecosystems,” says Kate Dooley, a research fellow at the University of Melbourne, who co-authored the chapter on land-use emissions. ” One of the big things about the research is seeing if we could achieve [an upper limit of] 1.5 degree warming through technologies that exist today. This book shows that through these natural climate solutions we would be able to reach them.”

Agriculture, forestry and other land uses contribute approximately one-quarter of all anthropogenic greenhouse gas emissions but receive only a tiny fraction of climate mitigation dollars. Meeting the ambitious goals of the Paris Climate agreement is strongly dependent on not just cutting emissions from fossil fuels, but also avoiding deforestation and reducing emissions from agriculture. Intact forests play a disproportionately large role in tipping that balance.

“Intact forests have the most carbon sequestration potential and therefore should have the highest priority,” says Dooley. “In addition to sequestering carbon, they obviously have benefits for biodiversity, water, and communities in general.”

The study doesn’t take into consideration bioenergy with carbon capture and storage (BECCS), a somewhat controversial negative emissions technology that is often included in pathways to 1.5C —while there are many pilot projects, the technology is yet untested on a large scale. Instead, it looks at only the existing technologies — mainly, conservation of actual forests, reforestation and sustainable management of forests.

“The study is conservative in a way because it doesn’t assume technological advancements in the land use and forestry sector,” says Ruth Delzeit, head of The Environment and Natural Resources research area at Kiel Institute for the world economy, who wasn’t involved in the study. “Things like BECCS and sustainable biomass are excluded.” 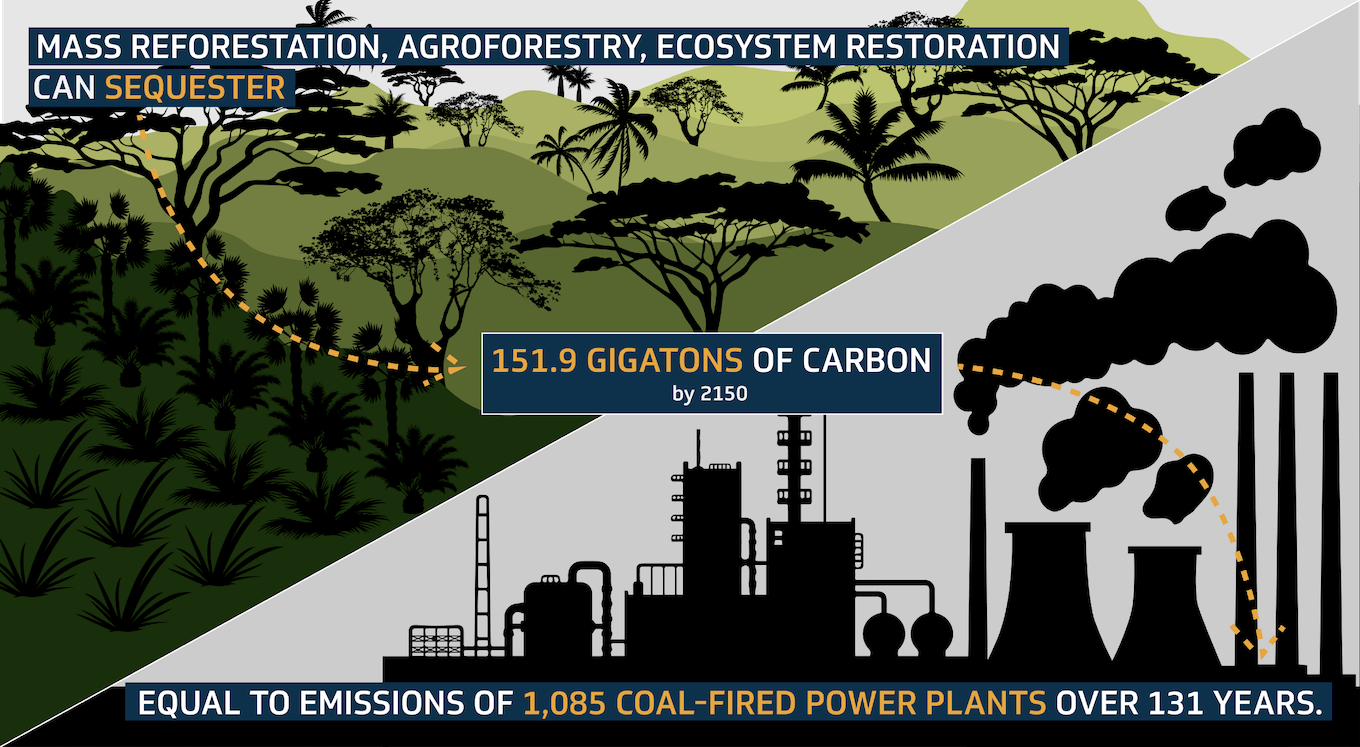 Forest conservation and restoration have the potential to sequester nearly 152 gigatons of carbon over the next 131 years. Source: Nexus Media

According to the report, which evaluates the sequestration potential from forest ecosystem restoration, reforestation, sustainable use of forests and agroforestry, terrestrial ecosystems have the potential to sequester 151.9 gigatons of carbon by 2150.

That’s roughly equivalent to the amount of carbon released from all agricultural activity since the industrial revolution. In order to achieve this, the authors say 25 per cent of degraded natural forest would have to be set aside for ecosystem restoration, deforestation would have to stop by 2030 and around 350 million hectares of forest have to be reforested — an area 5 times the size of Texas.

Other experts and studies have come to similar conclusions. A recent study argued that avoiding deforestation, reforestation and other “natural climate solutions” could provide over a third of the CO2 mitigation needed through 2030 to reach the Paris Agreement goals. The Global Deal for Nature (GDN)suggests a pathway to below 1.5°C that focuses on formally protecting 30 per cent of Earth and designating an additional 20 per cent as climate stabilisation areas by 2030.

Deforestation shows no signs of slowing down

“Currently, the biggest challenge is that land is a carbon source,” Dooley said. All forestry, agriculture and land use would have to become a major net global sink in her study, eventually sequestering twice as much carbon as they currently emit.

Tropical deforestation is caused by just a handful of crops — soy, beef, timber and palm oil. Some estimates suggest that cattle operations alone could be responsible for half of global deforestation.

The United Nations’ Sustainable Development Goal to “promote the implementation of sustainable management of all types of forests, halt deforestation, restore degraded forests and substantially increase afforestation and reforestation globally” by 2020[a5],” will unlikely be met, despite the increase in pledges such as The New York Declaration on Forests, the Amsterdam Declaration, the Bonn Challenge, the Consumer Goods Forum and the Tropical Forest Alliance.

Most of these share the goal of halving deforestation by 2020, eliminating it by 2030, and restoring 350 million hectares of forest — assumptions used in Dooley’s pathway to 1.5 degrees C.

“From a policy point of view, achieving these targets really relies on companies achieving zero-deforestation by 2030,” says Dooley. “But the emphasis needs to be on intact forests that have the highest carbon-sequestration potential, not on tree plantations or low-value forests.”

“There is a lot of zero deforestation on paper,” says Nicole Polsterer, the sustainable consumption and production campaigner for the NGO FERN. “But the underlying issues are not changing much.