Earlier this year in Rome, scientists from around the world debated the need to control trade in the endangered shortfin mako shark. The meeting of the United Nations Food and Agriculture Organisation (FAO) was to determine if this species, along with a handful of others, should be given protection under the Convention on International Trade in Endangered Species of Wild Fauna and Flora (CITES).

The decision in the end was not a positive one for the shortfin mako, with the expert panel declaring insufficient evidence to list the species. But that does not change the threats many sharks face.

Shark fin is a traditional delicacy in Hong Kong. Half of all shark fins harvested are either consumed in this tiny territory or pass through it on the way to other markets. Most of those fins come from vulnerable or endangered populations. 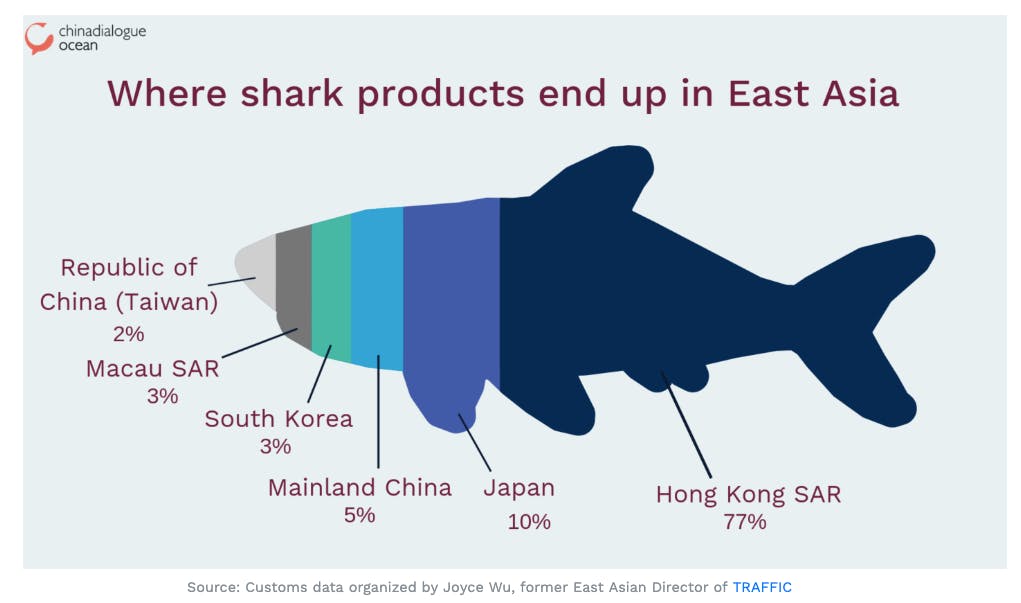 Hong Kong is a hub for the trade in many endangered marine species beyond sharks. In late March chinadialogue ocean held a seminar in the territory to discuss improved protections for these animals.

Experts at the seminar agreed that a CITES listing is only a first step. More cooperation on preventing illegal trading is also needed.

CITES is an international agreement controlling the trade in endangered species that came into effect in 1975. It has three appendices listing species at risk from international trade and in need of special protections. Cross-border commerce is banned for those species listed on Appendix I. The other two appendices offer lower levels of control.

Some marine species, such as the totoaba, have been listed on the CITES appendices since the beginning. But it wasn’t until 2002, when all species of seahorse were given protection, that new marine animals began to be added.

Under CITES processes, if the country of origin of a species thinks it is suitable for CITES protections and needs other nations to help prevent trade, it can propose its inclusion. Scientists first assess if trade does actually threaten the survival of the species in the wild, and then there is a vote on the proposed inclusion at a conference of parties to the treaty.

Yvonne Sadovy, professor of marine biology and ecology at the University of Hong Kong, says the trade restrictions that listing on CITES allows are crucial for conservation.

But gaining agreement that a species needs protection is no easy task, especially when it’s regarded as a food source. According to Zeng Yan, assistant to the director of China’s CITES Endangered Species Scientific Commission, the UN FAO, which participates in the assessment of CITES proposals, has never been supportive of listing commercial fish species.

Sadovy cites the example of the bluefin tuna. A proposal to ban the trade in a sub-species, the Atlantic bluefin, was put forward in 2010, and rejected. The bluefin is widely used in sushi, and as demand has increased with the spread in popularity of Japanese cuisine, populations have fallen. The Atlantic bluefin is considered endangered, just one of the three sub-species on the International Union for Conservation of Nature’s (IUCN) Red List. No bluefin tuna are listed in on any CITES appendices.

It’s even more difficult in China. According to Zeng Yan: “Apart from those listed as protected by the state, all marine species are managed as commercial resources under the Fisheries Law.” The current version of this law does not require any registration of catches, meaning it is impossible to be sure of population sizes or to carry out sustainable management. “Many developing countries really struggle to manage their own resources. It’s very difficult to control the millions of fishers involved,” added Sadovy.

A hard trade to control

In theory, a CITES listing should put a species on the radar of law enforcement agencies, as the treaty calls for strict controls on imports and exports. But that doesn’t stop smugglers.

Sophie Le Clue, director of environment at the ADM Capital Foundation, estimates that only 10 per cent of smuggled species are confiscated or interdicted. The remainder is either not discovered or not identified, she said.

Smugglers have a range of methods, some very hard to tackle. The firms transporting the goods may not even be aware of what they are carrying, making them unable to help the authorities. Illegal goods may also be labelled as legitimate products, a method that is particularly common in containerised shipping. It is even harder to monitor small fishing vessels, which can land cargoes away from official ports.

For the authorities, identification is a major challenge. Some illegally smuggled species can be identified by eye, whether as live specimens or as products. But some, including shark fin, are harder to spot. According to Le Clue, you might be able to identify fins taken from adult sharks, but it’s hard to determine the species of a fin taken from a juvenile.

For other smuggled animal products, such as the teeth of cetaceans, turtle shell products or dried fish swim bladders and gills, identification often requires special technology.

Manta ray gills have been a particular focus for Zeng Yan and her colleagues. Both species of this giant ocean creature were listed by CITES in 2014, with China named as the centre of trade.

Dried manta ray gill is used as an ingredient in traditional medicines in parts of Asia, allegedly to treat measles and increase the production of breast milk. In China, it is not officially listed as a medicinal ingredient, which means that although it is used, it is not widely known. To help enforce the new trade restrictions, researchers purchased over 200 samples of medicines for analysis and DNA testing. They were then able to teach law enforcement officials how to identify products containing the organ.

Smugglers also choose their routes to avoid harsher punishments. Selling totoaba swim bladder worth two million yuan (US$297,340) can incur an eight-year jail sentence on the Chinese mainland, but no more than two years in Hong Kong. This means Hong Kong is a less risky, and so more popular, destination for smugglers. For Amanda Whitfort, a professor at the  University of Hong Kong’s Faculty of Law, blocking that loophole would solve a major issue.

A hard problem to pin down

Although smuggling is a serious issue, failures to implement the CITES treaty are also central to the continued decline of many listed species. The totoaba of Mexico’s Gulf of California has been on Appendix I since the 1970s, but populations are still falling. This has had a significant impact on a species of porpoise that shares its habitat with the totoaba – the vaquita is now facing extinction with fewer than 20 mature individuals left in the wild.

Zheng Ruiqiang of Shantou University’s Marine Biology Institute helps customs officials identify smuggled species. But he says even effective enforcement at the border is not a lasting solution, as the situation is constantly changing. “Customs officials have reported that when ivory trading was banned, the number of cetacean teeth being smuggled increased,” he said.

That isn’t an isolated case. An investigation by Stan Shea, marine projects director for the Bloom Association’s Hong Kong branch, found that while shark fin consumption has started to fall in Hong Kong after years of campaigning, many diners think it is acceptable to replace it with swim bladder or sea cucumber. They are unaware that these choices again result in the trade in endangered species, or that the demand for fish swim bladder, for instance, is leading to overfishing of the Nile perch in East Africa’s Lake Victoria.

Zeng Yan thinks it is normal for a banned product to be replaced with an alternative. She says that rather than spending time protecting species after species, it would be better to look at the underlying motivations driving trade and consumption, and ask what is reasonable and sustainable. “We need wider-ranging policies and frameworks to find a balance between the fishing industry and sustainable conservation and find a better solution,” she said.

According to Michael Fabinyi, associate professor at the University of Technology Sydney’s School of Communication, people often think that China’s eating habits are centuries old and can’t be changed. “I don’t think that’s necessarily the case,” he said. He has found that food consumption can be affected by things like tariffs and marketing, as well as what might at first appear to be unrelated changes. Recent anti-corruption campaigning by the Chinese government, for instance, has led to a significant drop in the consumption of luxury seafoods in Beijing.

According to Stan Shea, culture determines what we eat, and also our future. For the Chinese, fish on the table symbolises a plentiful supply of food. “I don’t want to be remembered as the generation that ate it all,” he said.