A new report based on a study of 2,717 plantations in Borneo provides evidence that RSPO-certified concessions lose 25 times less forest and orangutan habitat than non-certified ones.

Ever since the palm oil industry started its industrial-scale expansion in South-East Asia it has been under pressure from environmental activists and NGOs for its negative impacts.

Much of that criticism was justified because many palm oil companies were established by clear-cutting logged-over forests and replacing these with palm plantations. Biodiversity losses are massive in such conversions.

To help reduce the environmental impacts of the industry, criteria for sustainable palm oil were developed by the Roundtable on Sustainable Palm Oil (RSPO), a multi-stakeholder standard-setting platform.

Many have questioned RSPO’s ability to reduce the environmental and social impacts of oil palm development, but few quantitative studies exist to substantiate these criticisms. Here we present what we believe is the first study of RSPO’s effectiveness in reducing loss of forests and orangutan habitats on Borneo.

In a study coordinated by Borneo Futures and funded by Wilmar International, we mapped 2,717 oil palm estates and concessions on Borneo, of which 80 per cent were active in 2016 (i.e., they had planted oil palms as detected on satellite imagery).

For each area we determined: 1) whether orangutans were present; 2) what the population trend had been since 1999; 3) how much deforestation has occurred between 2000 and 2015; and 4) whether companies were RSPO-certified or not.

The total area of the mapped estates and concessions was 13.3 million ha in 2015, or about 17.1 per cent of the land area of Borneo.

About 34.1 per cent of the total mapped plantation area was planted with oil palm, 21.2 per cent ha still forested, and the remainder used for other purposes (small-holder agriculture, mining etc.).

Map: All industrial-scale oil palm concessions on Borneo with orangutan populations and their changing population size between 1999 and 2014. 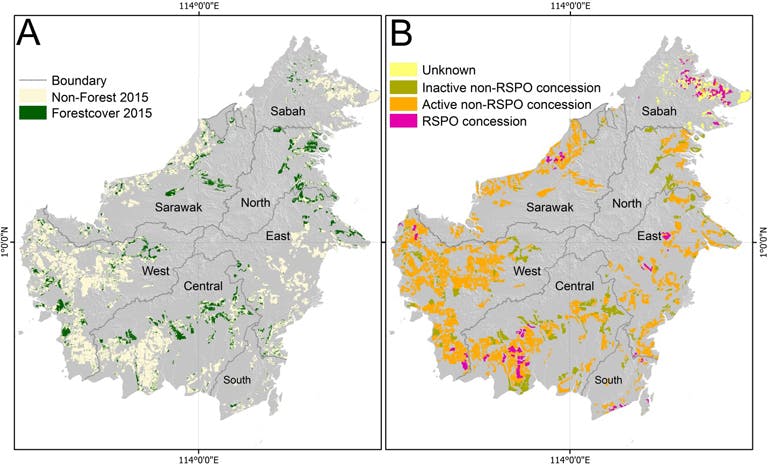 The absolute loss of orangutans is significantly lower in RSPO concessions on Borneo than in non-RSPO certified estate and concessions, but that relative loss rates are about the same.

This suggests that the absolute loss of orangutans is significantly lower in RSPO concessions on Borneo than in non-RSPO certified estate and concessions, but that relative loss rates are about the same.

Orangutan population trends in Borneo oil-palm concessions between 1999 and 2014. The top line shows trends for concessions that were not RSPO certified in 2015 and the bottom line RSPO concession.

With 10,000 orangutans currently occurring in areas allocated to oil palm the potential for disastrous outcomes for these animals is significant. Business-as-usual practices will lead to deforestation and the likely death of these protected animals.

Rescuing all of these 10,000 animals is not only logistically impossible, it would also incur costs of some USD 100–200 million to the conservation community. As shown in a recent study, such funds are much better spent on protecting remaining habitats. Orangutan rescues in oil palm areas should be a very last resort.

We can only prevent the deaths of these 10,000 orangutans if: 1. Government makes it very clear that the destruction of habitats of protect species and the killing of these animals is illegal and will be punished; 2. The 561 oil palm companies that currently have orangutans on their land are held responsible for protecting and effectively managing remaining orangutan habitats; 3. NGOs and other groups work with these companies to facilitate implementation of effective conservation practices.

We conclude that there is room for further improvement on environmental practices in RSPO-certified estates and concessions, but that orangutans have better prospects in management units owned by RSPO members, because of more effectively avoided forest losses there. RSPO compliance as measured through forest loss is improving with time.

Erik Meijaard coordinates the Borneo Futures initiative. Marc Ancrenaz is the scientific director of the French NGO Hutan and co-director of the Kinabatangan Orangutan Conservation Project. Follow them on Twitter via @emeijaard and @marcancrenaz