SpongeBob SquarePants and the ‘last frontier’ of the Philippines

A mysterious developer plans to build a Nickelodeon-themed resort in a global biodiversity hotspot.

Palawan, a slender archipelagic province whose furthest reaches lie more than 500 miles southwest of Manila, is famed as the “last frontier” of the Philippines.

A hotspot of endemism and biodiversity in an extraordinarily biologically rich country, Palawan hosts two UNESCO World Heritage Sites and some of the Philippines’ last primary forests.

Palawan and its outlying islands are also famed for their extraordinary beauty. Turquoise and emerald water laps against white, palm-fringed beaches, while dramatic limestone cliffs and craggy foothills cascade up to a lush and rugged interior.

In recent years, these natural bounties have won Palawan accolades as the world’s “best” or “most beautiful” island from the likes of Travel and Leisure and Conde Nast Traveler magazines.

Given Palawan’s ecological significance and its growing global fame, it should perhaps come as little surprise that the January announcement of plans to build a “Nickelodeon undersea attraction and resort” on Palawan’s Coron Island was met with both shock and outrage.

For the last decade, we haven’t heard about them, so what marine conservation project are they talking about?

Slated to open in 2020, the resort “will be inspired by some of Nickelodeon’s most iconic properties like SpongeBob SquarePants, Teenage Mutant Ninja Turtles and Dora the Explorer,” the company said.

The resort, it added, would advocate for ocean protection, while also featuring underwater restaurants and lounges and visits to a cluster of white-sand islands “[five] to 20 minutes apart by speedboat.”

Within days, an online petition against the project gathered more than 200,000 signatures.  “For a channel that targets children, Nickelodeon is setting a terrible example to the younger generation by taking away their right to enjoy our natural resources. We don’t need an underwater theme park — our underwater life is fascinating, entertaining, and educational on its own,” the petition read.

Who is behind the project?

For activists in Palawan and elsewhere in the Philippines — including petition-launcher Anna Oposa, co-founder of the NGO Save Philippine Seas — the January 9 press release from Viacom was the first they heard of the project.

Even officials said they were caught by surprise. Environment minister Gina Lopez told reporters she only heard about the project through the media. “I never officially got anything,” she said in a television interview. Meanwhile, in the days following the announcement, Palawan’s governor, and the mayor and tourism officer of Coron denied having been contacted by the developers.

In the face of growing public outcry, the resort’s local developer Coral World Park (CWP) stepped in to clarify some of the details, and filed an official letter of intent on January 25.

CWP also clarified that, contrary to activists’ worst fears, the underwater structures would not be built directly on coral reefs. Instead, CWP Marketing Director Susan Lee said the restaurants and lounges would be floating, “just like a glass bottom boat.” Nor would the park feature roller-coasters: it would be an underwater-themed park, not a theme park. 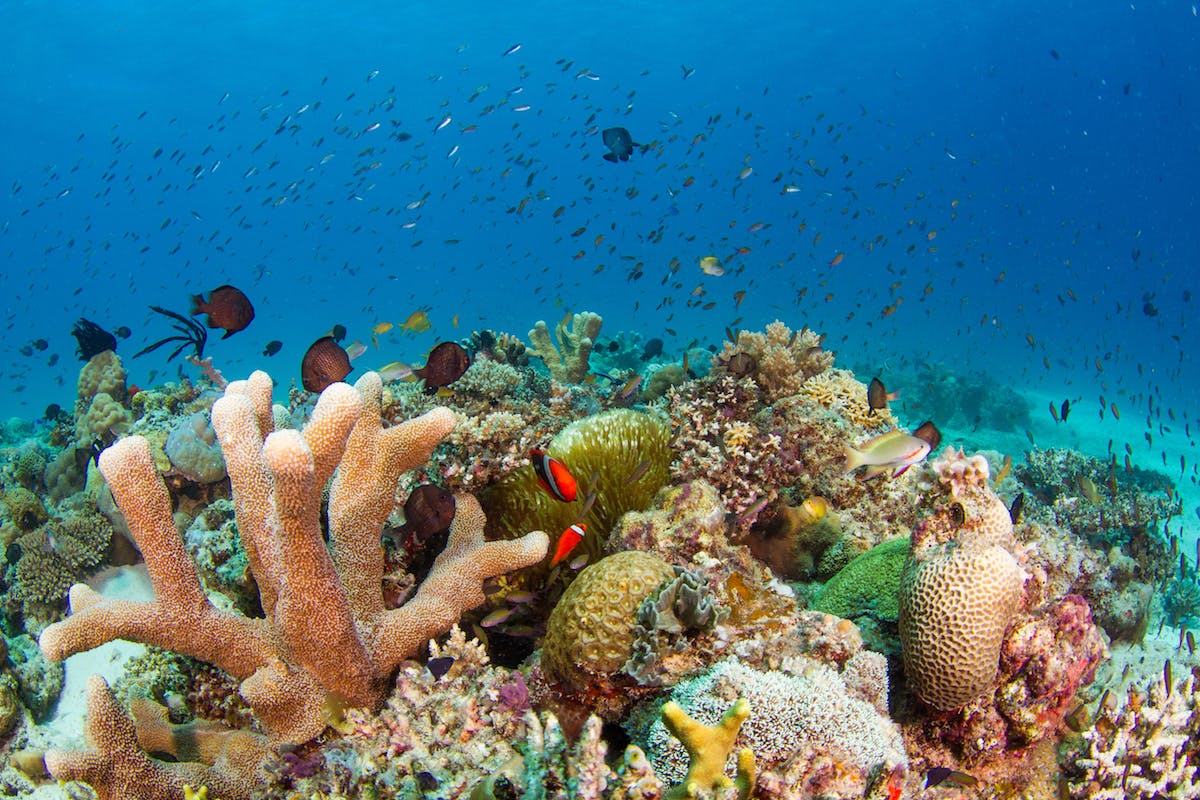 A healthy reef with full of hard and colorful coral in Coron, Palawan. Image: Steve De Neef/Greenpeace via Mongabay.com

However, the developers left numerous key questions unanswered. A master-plan for the Coral World Park – the larger, 400-hectare (988-acre) development in which the Nickelodeon resort will be situated – has not been released.

On January 27, Lee told Mongabay the master-plan would be published in “another two months.” The other companies involved in the project will be revealed “at the right time,” she said, adding that, for now, details about CWP’s collaboration with Viacom cannot be released due to “the confidentiality of the agreement.”

Questions also remain about the Dr. AB Moñozca Foundation, which, according to promotional materials, founded CWP “to address the conservation of coral reefs and its marine life.”

The foundation bills itself as “a European … based foundation and trust entity which supports various philanthropic initiatives.” Its Coral World Park initiative is described as “the largest Marine Reserve and Coral Reef Conservation program in Asia.”

The foundation’s website provides little additional information about its marine-related philanthropy, nor are there media accounts detailing the foundation’s conservation programs.

The Moñozca Foundation’s known projects include a proposed American Basketball Association-themed park and resort,  and an ill-fated trip to America by Filipino race-car drivers that eventually became known as “NASCAM.”

“They claim to be the largest coral conservation organisation in Asia, but no local organisations have heard of them,” said Oposa of Save Philippine Seas.

The Palawan NGO Network Inc. (PNNI), a coalition of 22 organisations working in the province, is also not familiar with the Moñozca Foundation’s conservation work. “Our network (PNNI) sits in the [Palawan Council for Sustainable Development], the highest policy-making and regulatory body for environment issues, and we have not heard of this project nor these conservationist,” PNNI head Bobby Chan said in an email.

“With due respect to their claim, they have no known track record on marine conservation,” said Grizelda Mayo-Anda, the Palawan-based executive director of the Environmental Legal Assistance Center. “For the last decade, we haven’t heard about them, so what marine conservation project are they talking about?”

According to CWP’s Susan Lee, the company is “bound by confidentiality,” not to provide details about the Moñozca Foundation’s conservation programs in the Philippines or elsewhere. When asked about partner organizations or consulting scientists, Lee said they “will be announced soon.”

On Februrary 21, Lee notified Mongabay that “our executives are overseas collaborating with a Florida based lab on Coral Reef Conservation initiatives,” but did not provide further details.

Lee also stated that the foundation has acquired 16 islands under a “‘no development – coral reef conservation only’ program,” and has committed to supporting 18 marine park sites in Coron.  She provided a list of 10 existing Marine Protected Areas in Coron, (image) saying CWP is supporting them in coordination with the local government, but did not provide additional documentation.

“I hope Nickelodeon and Viacom do due diligence,” Oposa said.

When contacted about the project, Viacom’s press office referred queries to CWP.

In defense of the project, Lee notes that Coron Island, the proposed location for the resort, is situated firmly on the beaten path. “Contrary to some media reports, our area is already buzzing with tourism and not in pristine islands,” she said.

Although this argument may somewhat undermine the CWP’s sales pitch — it promises a chance to experience “the most private place on earth” — it is no doubt true. The growing fame of Palawan and its outlying islands has brought with it an influx of domestic and international tourists. Visitor arrivals to the province skyrocketed from 14,249 in 1992 to more than 1 million in 2013. When the finally tally is in for 2016, visitor numbers are expected to reach 2.3 million.

“The emergence of Palawan as a regional and global ecotourism destination has been a long time in the works,” said the University of Melbourne’s Wolfram Dressler, an expert on the politics of conservation and development. “Now, however, it’s just taken off and been catalyzed by a range of high-profile events.”

Dressler pointed, in particular, to the increasing prominence of the Puerto Princesa Underground River, a five-mile-long stretch of the Cabayugan River that runs underground through a limestone cave. The river, and the park around it, was designated a UNESCO World Heritage Site in 1999. In 2012, the park was also designated one of the “New 7 Wonders of Nature.”