Sports fans at the Hub's centrepiece, the National Stadium, will stay cool thanks to the energy provided by the Hub's massive solar installation. Vaidehi Shah reports.

Tall enough to fit Changi Airport’s control tower, and wide enough to house four A380 planes parked wing to wing, the Singapore Sports Hub is an iconic addition to the country’s skyline. Viewed from a distance, the $1.33 billion facility - with its large dome shape and the impressive array of solar panels surrounding it - is not only a visual feast but an architectural feat built with sustainability in mind.

Rugby fans who thronged the hub’s National Stadium over the weekend at the inaugural World Club 10s Rugby Championship would have stayed cool thanks to the energy provided by a solar installation spanning more than 7,000 square metres, which if combined makes up the size of an entire football field.

The 707 kilowatt peak (kWp) installation of photovoltaic (PV) panels is owned and operated by homegrown solar firm Phoenix Solar Singapore. Over 2,700 solar modules from solar firm REC are installed on the rim of the circular stadium, above the office and the main car park. Besides generating clean electricity, the PV arrays reduce heat gain through these roofs by shading them from direct sunshine

In many ways, it marks the maturity of the country’s thriving solar industry and its entry into the mainstream market. Although Singapore enjoys relatively sunny skies all year round, the solar sector has been slow to take off until recent years when the drop in solar panel prices and a shift in government policy to actively encourage the adoption of solar sparked industry activity.

Christophe Inglin, managing director of Phoenix Solar,  a unit of German-headquartered Phoenix Solar AG, told Eco-Business in a recent interview: “PV is commercially viable today in Singapore, and the Sports Hub is a perfect setting to demonstrate the integration of PV in Singapore’s urban landscape.”

The solar energy that is used to power the stadium’s cooling system will reduce carbon dioxide emissions of at least 367,250 kilograms per year, according to Phoenix Solar. This is roughly the emissions from 77 passenger vehicles over one year.

Philippe Collin Delavaud, Sports Hub chief executive, says that adopting an efficient and sustainable source of energy has been a key objective from the project’s inception.

“When we first drew up the plans for the Singapore Sports Hub campus and its facilities, we were certain that we would need to integrate sustainable technologies into our operations to maintain efficiencies. In particular, an area in which this technology proved to be essential was the National Stadium, as it can host up to 55,000 spectators in one sitting.

“With this amount of people in one space, along with Singapore’s tropical climate, it was imperative to adopt an efficient and sustainable technology to keep our customers cool and comfortable. We are very pleased to work with Phoenix Solar, as they have combined solid technical expertise with an aesthetic design to integrate their PV power plant within the Sports Hub campus,” said Delavaud.

As a testament to the booming solar industry, Phoenix Solar says 2013 was the “best year ever” in the company’s seven-year history in Singapore. The company clinched a slew of major projects last year, including Singapore’s largest photovoltaic (PV) installation at the Sheng Siong Group’s corporate headquarters, and the prominent Sports Hub project.

But this has not always been the case for them, says Inglin.  “For the first two years, we were struggling to keep our heads above water, as there was no market,” he recalls. “Projects were just not commercially viable from a tangible perspective, although there were intangible benefits such as the PR value associated with reducing carbon footprint through solar energy. However, these were too difficult to quantify for clients”.

Inglin shares, “it was three years before we made a profit, four years before we recovered the paid up capital, and only in the fifth year that we began to accumulate returned earnings”.

Phoenix Solar’s growth trajectory mirrors that of Singapore’s overall PV adoption rates. Supportive government schemes and a fall in prices of PV panels are the two main factors that helped to change the industry’s fortune and contributed to a sustained rise in solar adoption rates. The capacity of PV installations in Singapore rose from close to none in 2008, to almost 5MWp/year in 2013. 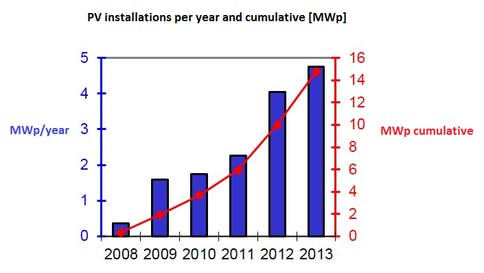 From 2010 to 2012, the cost of solar modules dropped by up to 70 per cent, which disrupted the market significantly, explains Inglin. This decrease in prices was due to Chinese manufacturing capacity skyrocketing, and a decrease in European demand once subsidies for solar were withdrawn. In that period, the cost of installing PV dropped from $5 per watt to just $2.50 per Watt for a large rooftop system. Not a single module manufacturer made a profit in 2012, he tells Eco-Business.

The transition to commercial viability in Singapore happened only last year when solar power achieved grid parity, says Inglin. That is, the price of generating 1 kilowatt hour of solar costs the same, or less, than the electricity from our mains sockets. This was made possible by significant government initiatives such as the Building and Construction Authority’s (BCA) Green Mark Scheme, and the Economic Development Board’s (EDB) Solar Capability Scheme, adds Inglin.

The former, a green building rating system, incentivises new and existing buildings to adopt solar solutions by allocating points for solar installations in their Green Mark Certification criteria, while the latter scheme provides incentives for research and development, and test-bedding of solar solutions in Singapore’s urban infrastructure.

Supportive government policies, combined with falling prices, have ushered the solar market into an era of stability and commercial viability, says Inglin. “When PV prices were still high, clients used to ask us what was the minimum amount of PV installations required to get points for the Green Mark certification. But when PV became viable from a commercial perspective, they now ask what is the maximum PV capacity they can install on their available roof area,” he shares.

Looking ahead, Phoenix Solar has got its eye on expanding in the region. Inglin says the firm is also exploring ways to make better use of roof space for solar installations, and wants to raise the level of engagement in policy discussion.

The company is also optimistic about growth prospects in the domestic market. “The market is going to grow quite rapidly in the next few years, due to policies and regulations that will encourage this”, says Inglin.

Amongst these is the SolarNova Programme, an initiative led by EDB that aims to accelerate the uptake of solar technology in Singapore by having public agencies procure PV installations across government buildings and spaces.

When PV prices were still high, clients used to ask us what was the minimum amount of PV installations required to get points for the Green Mark certification. But when PV became viable from a commercial perspective, they now ask what is the maximum area that we can install PV panels on.

Last year, Singapore’s Housing Development Board (HDB) announced its largest solar leasing tender to date, which would see PV panels installed on a total of 125 housing blocks across the island. This would produce 5 MW of electricity under optimum conditions, enough to power more than 1,000 four-room HDB flats.

Growing demand from the government sector is just one of the factors that has prompted the Sustainable Energy Association of Singapore (SEAS) to predict in a recent white paper that Singapore’s PV installed capacity will more than double in 2014, exceeding 28 MWp.

Assuming this growth rate continues, SEAS predicts that Singapore will attain 2GWp of PV installations – or 4.8 per cent of forecasted electricity demand – by 2025. 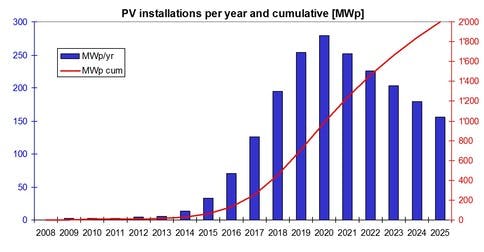 SEAS predicts that as PV scales up in Singapore and PV panel prices continue to drop, building owners will be able to enjoy payback periods of about seven to ten years, which it says is “generally considered attractive” for an asset that lasts 25 to 30 years.

Inglin, who chaired the committee that produced the SEAS white paper, points to “systems level innovations” – that is, developing solutions at the macro scale by addressing policy and infrastructure challenges associated with scaling up solar - as a key area of opportunity for Singapore as the domestic solar industry grows.

For example, If Singapore does achieve the 2 GW capacity as predicted by the SEAS paper, it would affect grid stability significantly, he says. There are many solutions Singapore can look into to manage this imbalance to ensure that it remains one of the most stable grids in the world, he adds.

“Singapore has a leadership role to play, because we are the first in the region to achieve such market growth independent of subsidies. The knowledge we develop on urban solar solutions can be shared regionally”, he says.

Managing the intermittency of renewable energy sources, and developing systems solutions to integrate new solar technologies into old infrastructure are some additional areas where Singapore can play a leadership role in the region, he observes.

EDB echoes this optimism for Singapore’s prospects as a frontrunner for the solar industry in the region.