An enlightening talk by one of the world's leading conservationists on the value of the natural world became a platform for debate on one of Singapore's most sensitive environmental concerns - plastic.

An inspiring talk in Singapore on Sunday on the value of nature by one of the world’s most famous conservationists will also be remembered for the punchy panel session that followed, when an audience member challenged a minister over the government’s policy on plastic bags.

In a talk on the value of the natural world titled One Nature, Together, Dr Jane Goodall had pointed out that plastic pollution was contributing to the acidification of the ocean and was draining the seas of their ability to absorb carbon dioxide and breathe life-sustaining oxygen back into the atmosphere.

The topic was picked up in a panel discussion after Goodall’s address, which also featured Desmond Lee, newly promoted minister, Prime Minister’s Office and second minister for Home Affairs and National Development. One of the final questions in this session hit on policy interventions to curb Singapore’s “alarming” use of plastic bags. This issue is being exacerbated by the rise of grocery delivery services such as Redmart and the newly launched Amazon Prime, and food delivery brands such as Deliveroo and Uber Eats.

These companies are guilty of over-supplying their customers with plastic bags, said a woman in the audience, and suggested that the government should step in with legislation to control plastic bag consumption.

“There are plenty of ways we can all reduce plastic on a personal level. But until there is a structural and policy change, the impact will be insignificant,” she said, which prompted enthusiastic applause in the packed auditorium of 1,500 people at Mediacorp’s MES Theatre.

To this, Lee replied that if plastic bag policy was greeted with the same enthusiasm at every forum where the issue was debated, “the battle would be won.”

He stressed that the responsibility for tackling the plastic bag issue was not the government’s alone.

You’ve got to get to people’s hearts if you want them to change, not argue with them and tell them they’re bad people.

“Please go out there, and advocate for a change in human lifestyle and behaviour,” he said to his audience. “If you speak to our friends in marine conservation, they tell me of the horrible effects that plastic pollution is having on the sea.”

“At the end of the day, we want everyone to behave responsibly and sustainably. Many supermarkets have started to offer alternatives [to giving out free plastic bags],” he said.

One of them is Singapore’s largest supermarket chain, NTUC Fairprice, which encourages customers to bring their own bags by offering a 10-cent rebate. But like its competitors, the company has resisted pressure from local green groups to introduce a charge for plastic bags, and the government has not legislated for retailers to impose a plastic bag tax.

Singapore uses in excess of three billion plastic bags a year. Most are used to hygienically dispose of domestic trash at home, but many end up as waste and incinerated. Though incineration is expensive and polluting, plastic bags are a useful source of fuel for the country’s garbage incinerators.

“The question is whether we are able to change our lifestyles, and advocate for change among our loved ones and friends. Policy change is coercive, and can be done. But I think it’s important to make sure that we’re out there, everyone of us in this hall, speaking up for this cause,” Lee said.

Dr Shawn Lum, president of conservation group Nature Society of Singapore, added: “We’re [consumers] looking for policy to come down [to affect change]. But for things to really change, you have to work from the ground up.”

Singapore will end up as a soulless jungle of concrete glass and steel.

In an earlier address at the event, Lee said that Singapore could not just be a ‘City in a garden’ and needed evolve into a ‘biophilic city’—one where nature is built into urban design, and people co-exist with animals.

‘City in a Garden’ is a green-minded approach to urban development pioneered by the city-state’s former prime minister Lee Kuan Yew. It has seen millions of trees planted on or around buildings all Singapore since the 1960s.

For Singapore to become truly biophilic, its citizenry needs to learn more about the value of biodiversity, and become more tolerant of wildlife, said Lee. Recent incidences of human-wildlife conflict in Singapore include a monkey biting a citizen and a wild boar goring a dogwalker.

If the country’s wildlife is not preserved, “Singapore will end up as a soulless jungle of concrete glass and steel,” warned Lee.

In a land-scarce, highly urbanised yet biodiverse country of 4,673 species of flora and fauna, human-wildlife interaction is “inevitable” as the human population rises, he said, adding that “not everyone is comfortable being so close to nature—some don’t like it at all.”

Goodall’s charity, the Jane Goodall Institute, has been working to improve the relationship between people and animals in Singapore for the last 10 years. The institute works with Singapore’s National Parks Board to organise “monkey walks” to familiarise the public with longtailed macacques, a species that regularly comes into contact with people because the animals are routinely fed.

Goodall said it would be “very easy” for the government to manage human-wildlife conflict “in a country the size of Singapore if there weren’t so many people living here.” The over population of the world has long been one of Goodall’s primary concerns. 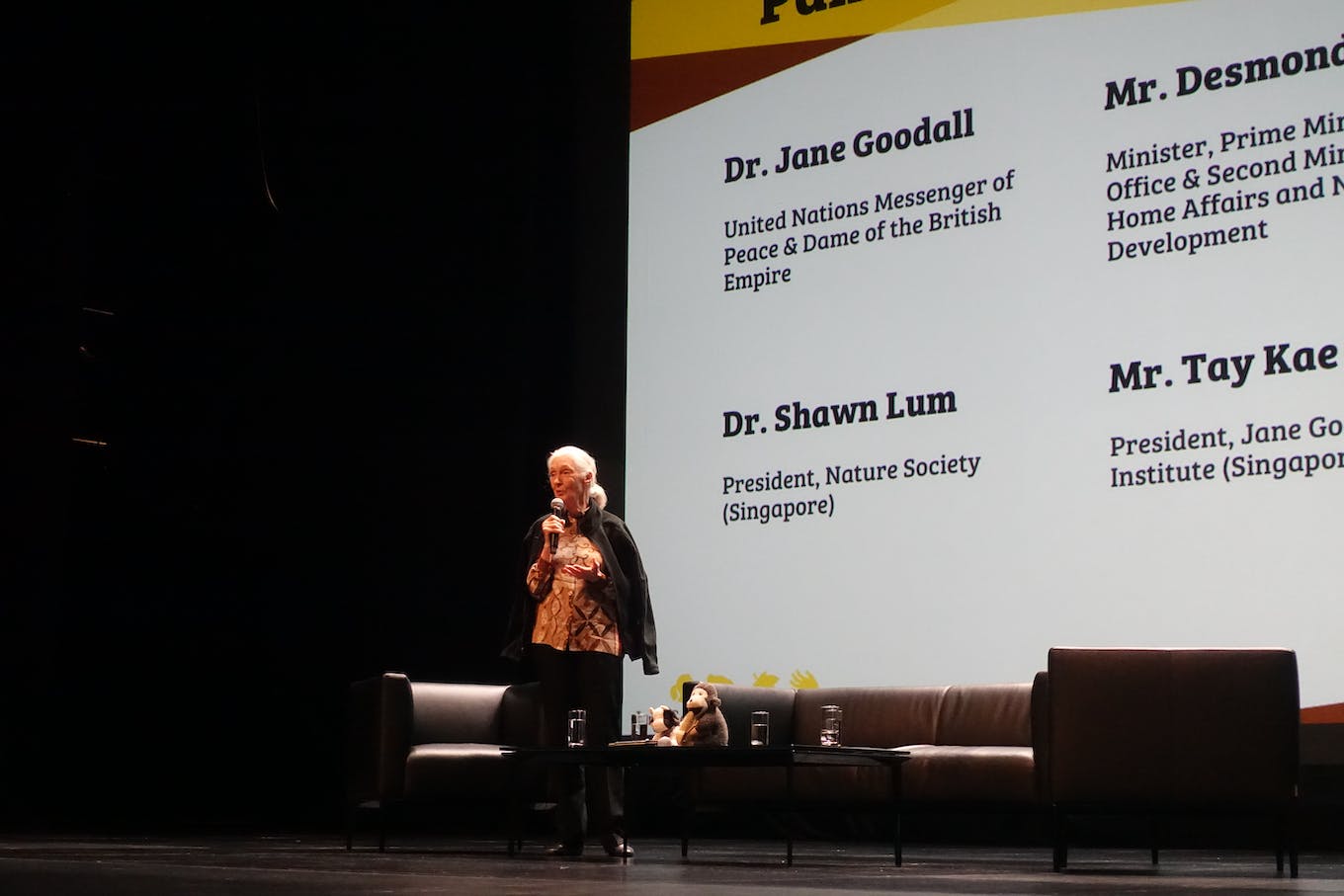 Dr Jane Goodall: “There is a window of time for us to start turning things around. Scientists will disagree. But I prefer to live with hope.” Image: Eco-Business

How to change people

Asked to define her biggest achievement, Goodall, whose accomplishments include the discovery that chimpanzees use tools and have, like humans, a darker side to their nature, said it was the realisation that “each one of us makes some kind of difference, and we have a choice as to what kind of difference we’re going to make.”

She added that preaching is the wrong way to engage with people on environmental issues. Telling people they are behaving badly “really doesn’t make any difference,” she said. “People will argue with you.”

“I get around it by telling stories. You’ve got to get into people’s hearts if you want them to change, not argue with them and tell them they’re bad people,” she said.

Goodall added that even though “the world is a mess,” with deforestation, ocean acidification and the continued burning of fossil fuels causing climate change-causing carbon emissions, she remains optimistic.

She said that there appears to be a “disconnect” between the human brain and the heart. People are making decisions to help themselves now, and not thinking about the future.

“There is a window of time for us to start turning things around. Scientists will disagree. But I prefer to live with hope,” she said.