Oil major Shell has for the first time sketched out what it thinks it would take for the world to avoid 2C of global warming.

In a supplement to its well-known New Lens scenarios, titled, “A better life with a healthy planet“, and released online this week, it sets out its vision for how to meet the ambition of the Paris climate deal, agreed last December.

Shell has previously studied – but refused to publish – a 2C-compatible scenario, telling Carbon Brief last year it might not be “helpful” to do so.

Carbon Brief runs through the highlights of Shell’s new work, and what it means for the company and beyond.

In the past, Shell has been criticised for failing to publish scenarios compatible with the global goal of avoiding 2C of warming. Instead, it has maintained that the world is not on course to avoid 2C.

Shell says its New Lens scenarios correspond to around 2.5C of warming this century, with global emissions reaching net-zero around 2100. In a 30-page letter to investors sent in mid-2014, Shell wrote:

“Our New Lens scenarios show that the world can tackle and resolve the climate issue over the course of this century, but not in less time than that…We also do not see governments taking the steps now that are consistent with [avoiding 2C].”

What’s more, Shell has dismissed those, such as Bank of England governor Mark Carney, who have warned that fossil fuel assets could become stranded and worthless in the face of climate action.

December’s Paris Agreement upped the ante by aiming to limiting warming since the pre-industrial period to “well below 2C” and to “pursue efforts” to limit it to 1.5C. Under shareholder pressure, Shell recently agreed to be more transparent about its exposure to climate risks, and to release other climate-related information.

It’s in that context that Shell has published this week’s supplement to the New Lens scenarios. Whereas those scenarios contained detailed, quantitative outlooks for the future global energy mix in particular years, the supplement only provides a broad narrative sweep.

The new report expands on a 2014 essay by Jeremy Bentham, vice president global business environment for Shell and the head of the company’s scenarios team.

It sketches out what would need to happen under an “accelerated net-zero emissions scenario”, which would come closer to being compatible with the aims of the Paris agreement. Having previously argued that net-zero could not be reached before 2100, Shell concedes that it might be possible under a “Goldilocks” pathway with a “combination of all the most optimistic outcomes.”

In a foreword to the report, Bentham writes: This is the] story of one possible pathway involving a patchwork of solutions that could result in a better life with a healthy planet on a timescale consistent with global aspirations.”

Shell still contends that some sources of greenhouse gas emissions will be impossible to eliminate. It says carbon capture and storage (CCS) plus negative emissions technologies will be needed to offset these residual emissions. (Not everyone agrees. Check out Carbon Brief’s archive to learn more about the political, technical and environmental constraints at play).

Like its New Lens predecessors, therefore, the accelerated scenario involves reaching net-zero emissions. The difference is in how quickly the world gets there.

Shell says getting to net-zero by 2100 would equate to 2.5C of warming, with a 2070 deadline for 2C and 2050 for 1.5C. These dates are broadly in line with the latest science, which Shell cites in its report.

This is [the] story of one possible pathway involving a patchwork of solutions that could result in a better life with a healthy planet on a timescale consistent with global aspirations.

Shell does not explicitly give a date for net-zero emissions in its accelerated scenario, but it does say it would result in warming of no more than 2C, meaning net-zero would have to be reached around 2070.

Similarly, Shell does not say whether its new scenario would meet the Paris goal of staying “well below” 2C, let alone the aspiration to avoid 1.5C. The supplement includes the chart, below. Its accelerated scenario would lie somewhere in the orange shaded range. 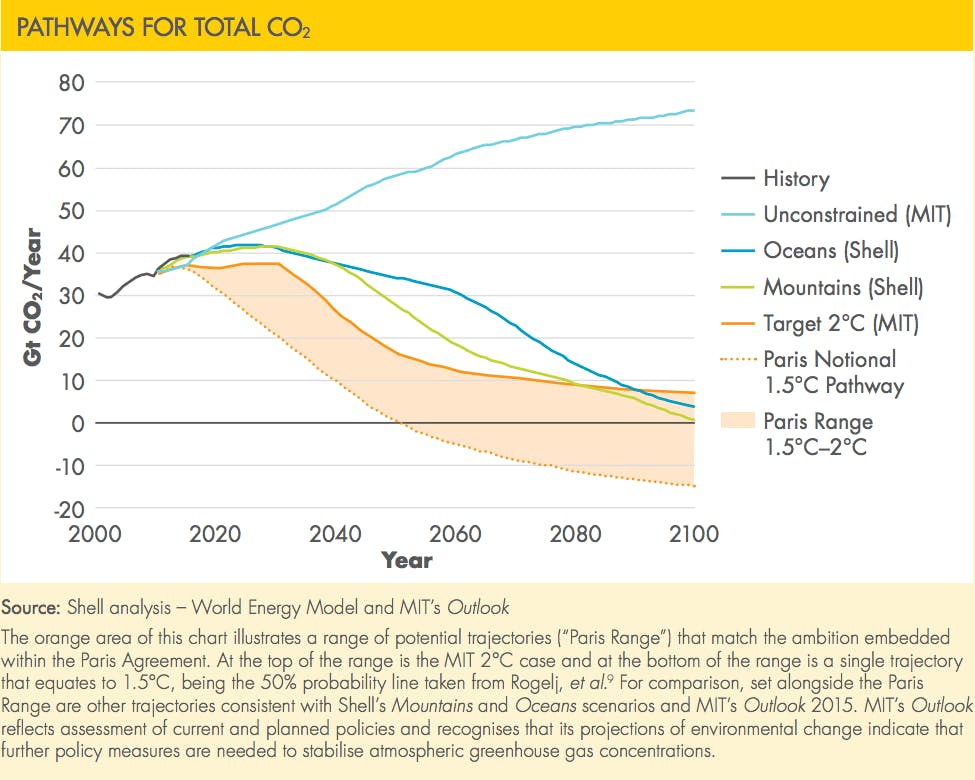 How to avoid 2C

As noted above, Shell says it would take a “Goldilocks” combination of factors to reach its 2C scenario, but what would that actually mean? In its report, Shell sketches out what sort of things would need to change.

To support the transition, it says economic growth ought to be “neither too fast, so that there is time for adjustment, nor too slow, choking funds for investment”. The most important near-term change, it says, would be a shift away from coal-fired power generation towards natural gas.

It repeats its long-standing support for carbon pricing, preferably at global scale. It adds that state or national schemes might need to add border tax adjustments to avoid carbon leakage.

Shell also calls for technology investment –  in particular, for CCS – and for energy efficiency measures that can overcome non-financial barriers to deployment.

At country level, the report says China’s coal use would need to peak by 2020 (it’s worth adding that some believe it may have peaked already). In India, low-cost solar and gas grids would moderate coal expansion and emissions would plateau in the 2030s.

In the US, the 2C scenario would see “more people become aware of the costs of adaptation to climate change because of increased turbulent weather patterns and the impacts of ecological events on international (and hence national) security, trade and investment”.

The Clean Power Plan would overcome the legal challenges it faces, while “investors who face the prospect of holding ‘stranded’ capital in power generation…[would] instigate market reform” and wind and solar would thrive as “normal business[es]”.

In Europe, countries would progressively manage the intermittency of wind and solar energy through interconnected electricity networks, and surplus offshore wind would be used to generate hydrogen. Fossil fuels’ share of the EU energy mix would fall to around a fifth, from today’s 70%, though it does not say by when.

What it means for Shell

The report talks of major changes in the shape of the global economy. However, it lacks the information needed to assess in detail what it would mean for Shell and the wider world. Even so, it does contain some intriguing indications on Shell’s thinking.

For instance, it notes that some businesses may face “diminished returns as some investments – particularly unabated hydrocarbon infrastructure – become redundant”.

“We believe our portfolio is resilient under a wide range of outlooks, including the IEA’s 450 scenario [compatible with avoiding 2C of warming]…[However,] we have no immediate plans to move to a net-zero emissions portfolio over our investment horizon of 10–20 years.”

In other words, despite publishing a 2C scenario, Shell’s position has not shifted significantly. It effectively argues not only that a well-below 2C or 1.5C scenario is stretching credulity, but that its “investment horizon” is too short to be materially affected, even if emissions are brought down to reach net-zero by 2070.

Only time will tell if it is correct.