By dragging their feet on using renewable energy, Australian corporate giants are missing out on cost savings, consumer loyalty, and a boost to their public reputations, says the country's renewable energy agency.

A new study by the Australian Renewable Energy Agency (ARENA) has found that while international corporations are moving swiftly towards 100 per cent renewable energy use, Australian businesses are falling behind and as a result, are losing out on cost savings and business from environmentally conscious customers.

Titled ‘The Business of Renewables’ and launched on Tuesday ahead of the Australia Clean Energy Summit in Sydney, the report found that out of the 92 largest public and private companies in the country, only 46 per cent use renewable energy.

Even the firms that are renewable energy adopters don’t use much of it. ARENA found that among companies that do use clean power, sources like solar, wind, and biomass only make up 10 per cent or less of their energy mix.

For these companies, solar is the most popular choice followed by wind and biomass/biogas. About 38 per cent of companies who used renewable energy did so by generating it on their own premises, while a fifth did so by purchasing GreenPower—this is a government-managed scheme that allows homes and businesses to offset their electricity use with certified renewable energy.

Another 19 per cent did so via Power Purchase Agreements for electricity, where renewable energy developers set up, maintain, and own the clean energy projects but sell the electricity to the customer.

The study also found that corporate Australia is using far less renewable energy than its international peers. American companies like technology giants Microsoft, Apple, Google, Facebook and Amazon, for instance, plan to have a fully renewable energy supply in the long-term.

Apple is already fully renewable-powered in 23 countries including China and the United States, while Microsoft currently purchases renewable power to offset all of its electricity use.

“Consumers are more likely to reward companies that take the plunge with greater loyalty and high tolerance of price fluctuations that may come with renewable energy procurement,” he noted. “Using renewables helps create a positive impression of a business.” 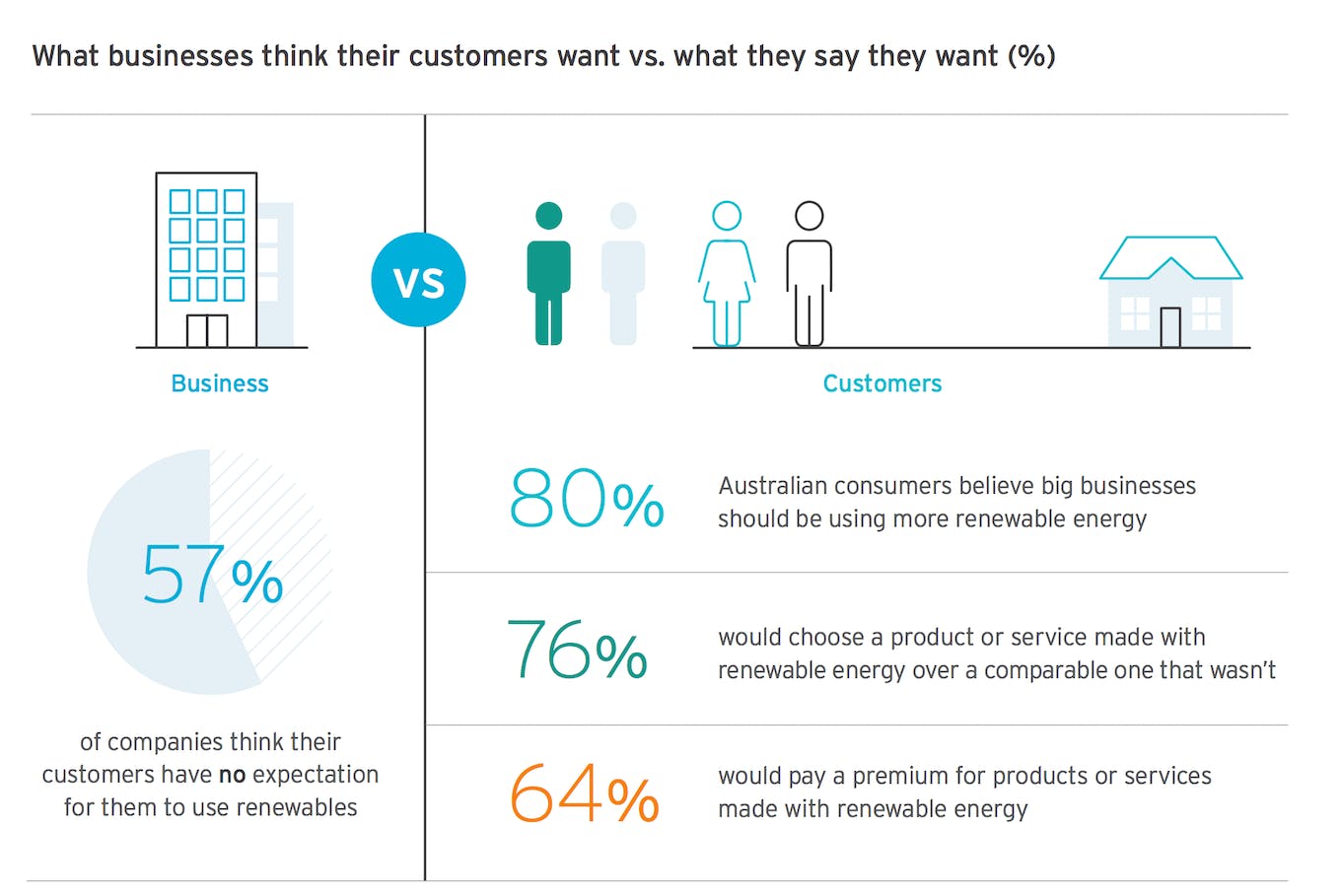 Kane Thornton, chief executive of Australian industry body Clean Energy Council, added: “With the cost of renewable energy falling so rapidly this decade, and public support so strong, investing in clean energy is really a win-win for Australian business.”

However, ARENA’s research showed that companies have mixed perceptions of the cost competitiveness of renewable energy.

A third of the companies ARENA polled—especially those that do not currently use any renewable energy— said they did not plan to explore this option in the next year and a half, mainly because it was too expensive.

They also cited competing investment priorities and a lack of information about renewables as reasons for their reluctance to explore new energy options.

But on the other hand, companies that already use renewable energy said that lower costs and better returns on investment were the biggest incentive for switching power sources. These firms even indicated that they plan to increase their renewable energy use, which could see corporate investments of as much as A$910 million in solar, wind, and other sources such as solar over the next 18 months.

In addition to the attractive costs of clean energy, companies said that it also delivers a better public reputation and a more diverse energy portfolio to lower the organisation’s risk. 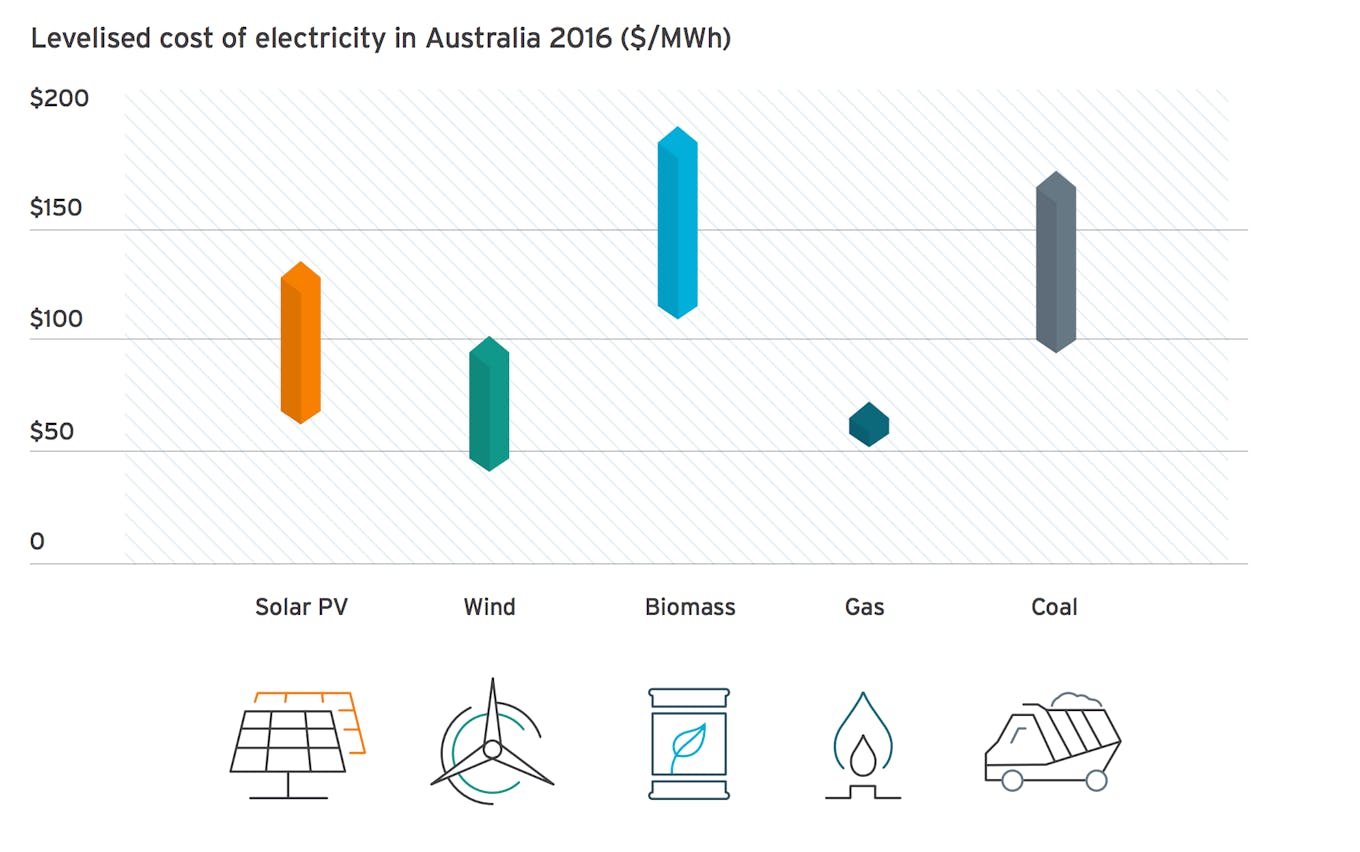 The levelised cost of wind and solar energy can be lower than coal in Australia. Image: ARENA.

It is paradoxical that companies on both sides of the renewables equation cited cost as the main reason for their decisions, observed ARENA, and noted that this discrepancy might be due to a lack of information about a full cost-benefit analysis of renewables. Heavy energy users such as mining companies might also be better informed about the most cost-effective energy options, due to their large energy bills.

Clean Energy Council’s Kane said that “there is an appetite among agribusiness operations, miners, telcos and many more to invest in clean energy and storage once they begin to realise the cost savings available and the expectations of their customers.”

ARENA’s Frischknecht added: “If companies stand on the sidelines for too long, they risk falling behind their competitors in terms of saving on energy costs, reaching sustainability targets and meeting changing customer expectations.”