Overheard in sustainability: The funniest moments in 2017

Sustainability can be a sobering sector. We picked out a few stories from 2017 that helped us see the lighter side of a flood of bad news about record emissions levels, political inaction on climate, and lapses in corporate responsibility.

Inspired by the wonderful Overheard in the Newsroom Twitter feed that chronicles journalism’s lighter moments, Eco-Business started the @OHSustainability Twitter account in February this year to capture some of the funnier stories from the super-serious world of sustainability.

Here are a few things that tickled us this year.

1. The UN tries to make the SDGs go viral

In an unlikely partnership, Japanese comedian Kazuhito Kosaka, the creator of Pen-Pineapple-Apple-Pen, arguably the most irritating, nonsensical viral video in the history of the internet, teamed up with the United Nations to create a Sustainable Development Goals-themed video.

Pen-Pineapple-Apple-Pen (PPAP) took on a new life as Public-Private-Action-for-Partnership in an equally bizarre version of the original. Quite how being in possession of a single apple and a single pineapple will eliminate poverty is unclear, but somehow this video amassed thousands of views. Mission accomplished.

2. The Man from Del Monte says he does too much for the environment

When it comes to sustainability communications, companies are usually careful to avoid chest-beating lest they risk being labelled a braggart, or worse. That doesn’t seem to worry fruit company Del Monte.

In a press release about their efforts to reuse waste water from a pineapple factory in the Philippines in January, the firm self-described as “environmental overachievers”. Well, if the Man from Del Monte says so, sure.

Eco-Business gets its fair share of loony comments from climate change denialists on our stories. Here are a few that got us a bit hot under the collar this year.

In response to our article that predicted that the 2-degrees Celsius global warming horizon would be overshot, Dale Allen wrote:

“Cannot wait for the increase, I live in Canada and a 2-degree C increase would be welcome. It’s not like it has not been above that in the past, several thousand years ago before mankind thought they knew it all we had tropical rainforests in northern Canada. Guess we can blame that on the farting of large mammals.”

For our round up of the top 5 carbon and climate stories of 2016, Duane A. Fisher suggested that only the weak-minded fall for the climate change “hoax”. Their comments are made all the more believable by their generous—but totally random—use of capital letters.

“Man Made Climate Changers continue the Hoax, Propaganda to Enslave the world under a Carbon Tax Scheme Ripp off! Only the weak minded are falling for this. Unfortunately a lot of the Brain-washed Morons are in leadership positions. The educated know that the Sun is the Culprit and not carbon.”

In the comment thread of the same story, this gem from another American, who goes by the name Frank H., is the classic rallying cry of the denialist:

Unveiled in July, the dress that measures air pollution is unlikely to be stocked in H&M any time soon, but was an imaginative way to freak us all out about bad air.

5. Where the sun don’t shine

A fitting response to the denialist brigade came in April, when thousands gathered in the rain in Washington to protest against US President Donald Trump’s apparent dislike of science and facts. We particularly enjoyed this protester’s poster. 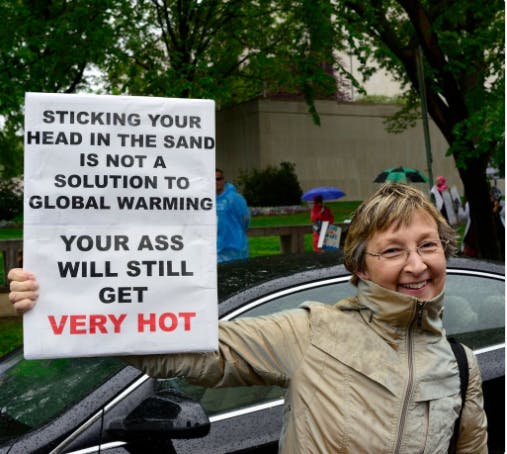 An astute if grammatically garbled observation was made Singapore-based speaking coach Stu Lloyd in May about an Eco-Business article that suggested that the world would be better off if Trump withdrew the US from the Paris Agreement. 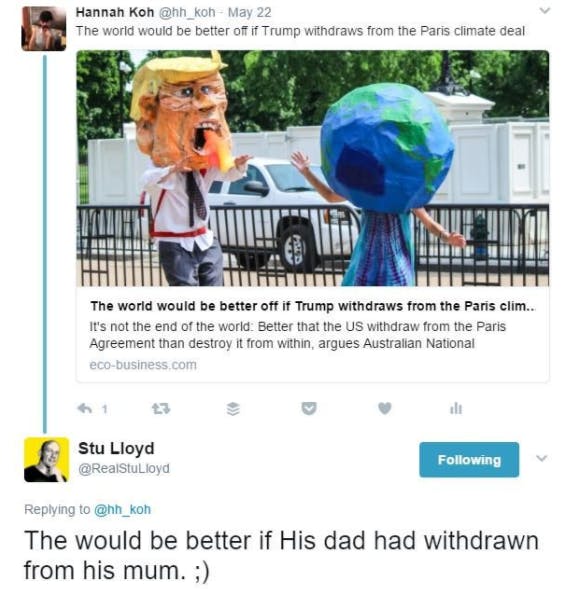 Should read: The world would be better…

The ever-outspoken Assaad Razzouk, the chief executive of renewables firm Sindicatum and newly-minted Eco-Business advisory board member, delivered a sobering but hilarious reality check to the sustainability community at the Eco-Business “Will businesses drive the SDGs?” event in Singapore in March when he suggested the following:

“99 per cent of businesses think the SDGs are a type of sexually transmitted disease.”

Have we missed any? Let us know and we’ll add them to this post.

This story is part of our Year in Review series, which looks at the top stories that shaped the business and sustainability scene over the last 12 months.

The top 5 manufacturing stories in 2017

A mobile app to fight human rights abuses and the impact of blockchain on the fashion industry were some of the stories that shaped manufacturing in 2017.
The top 5 manufacturing stories in 2017

Smart water technology, India's weather woes and the first Clean Seas Campaign were the top headlines for the water sector in 2017.
The top 5 water stories in 2017

How much progress did we make in switching to green energy in 2017? What are the obstacles that remain to be tackled? Read on to find out.
The top 5 energy stories in 2017

Cities around the world continue to face challenges like pollution, poverty, inequality, public health, and migration. Instead of merely relying on the national government, they have increasingly taken a frontline position in the fight against climate change.
The top 5 cities stories in 2017