CO2 emissions from human activities are making plants grow faster, resulting in a "global greening" effect particularly in China and India. But this does not offset the loss of tropical rainforest, scientists say.

China and India are “leading the world” in “greening” the landscape, a study finds, with the two countries accounting for one-third of the new forests, croplands and other types of vegetation observed globally since 2000.

The results, published in Nature Sustainability, also show that China alone accounts for a quarter of the human-caused greening observed since 2000—despite containing only 6.3 per cent of the world’s landmass.

However, it is important to note that greening observed in China and India is “not enough to offset” the loss of the world’s tropical rainforests, particularly in Brazil, a scientist tells Carbon Brief.

The findings also suggest that the “CO2 fertilisation effect”—where increasing CO2 levels in the atmosphere bolster the growth of plants—could be a “less prominent” driver of “global greening” than previously thought, a study author tells Carbon Brief.

This is because human-driven land-use change—through the planting of croplands, forests and other types of vegetation—could be having a larger impact on global greening than previously recognised, the author says.

Across the world, the rate of plant growth appears to be increasing. Scientists who study this phenomenon call it “global greening”.

One reason that plants could be growing faster is that humans are releasing billions of tonnes of CO2 into the atmosphere every year—and plants use CO2 to carry out photosynthesis. The process whereby increasing CO2 levels boosts plant growth is known as the “CO2 fertilisation effect”.

However, humans can also have a direct impact on the amount of vegetation found on Earth through the way in which they manage land.

When you read this, it seems a bit like you could conclude ‘well this greening trend is driven by land-use activity and human-land management, so we are doing great’—but it is important to note that this will not offset, for example, loss of the Amazon rainforest.

The new study examines how both human-driven land-use change and the natural growth of vegetation have contributed to greening across the world over 2000-16.

To do this, the researchers made use of data taken by the Moderate Resolution Imaging Spectroradiometer (Modis)—a key sensor onboard NASA’s Terra and Aqua satellites.

“One challenge of the optical satellite remote sensing is the data corruption by clouds and aerosols. Our study therefore further refined Modis [data] by rigorously checking the quality flags. We also use GIS [Geographic Information System] data…to calculate and rank the net change of leaf area and the proportions of greening and browning by countries.” 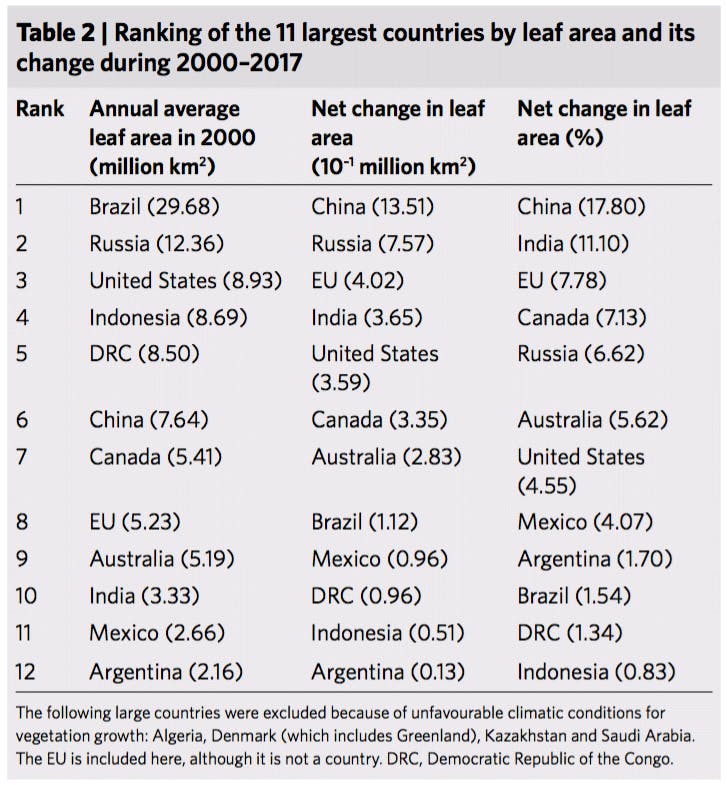 The results show that “China and India stand out”, Chen says:

“China and India, the two most populous and emerging countries—rather than the developed nations—are leaders in greening the lands through planting of trees and intensive crop cultivation. China and India account for one-third of the greening but contain only 9 per cent of the global vegetated land area.”

China alone accounts for a quarter of the global net increase in leaf area from 2000-16, the study finds. This is equal to the greening observed in Russia, the US and Canada over the same time period.

Around 42 per cent of the greening seen in China comes from the expansion of forests. The map below offers a closer look at greening from forest expansion in China over the study period. (Last year, Carbon Brief published an explainer detailing how China has, according to its government, planted 35bn trees since the 1990s.) 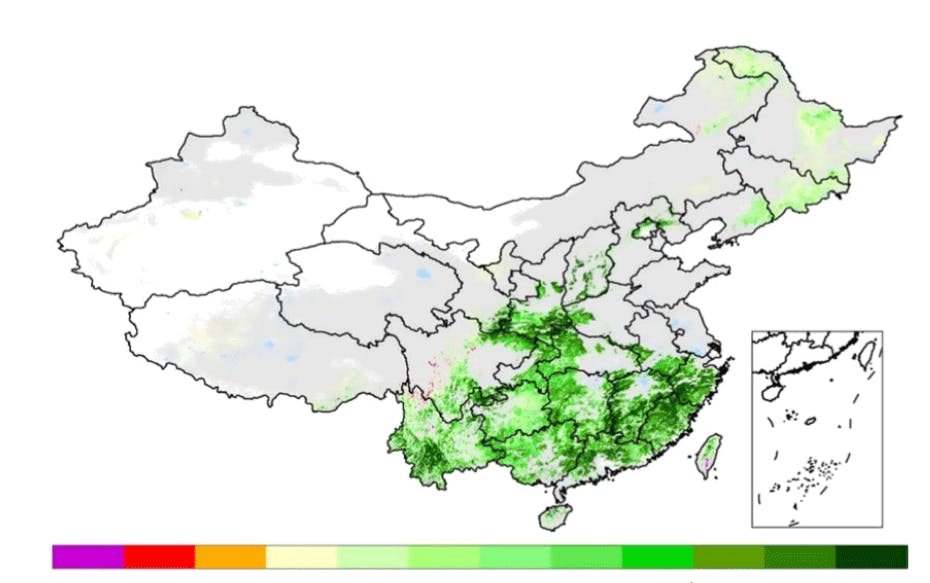 Net gain (green) and loss (yellow to purple) in leaf area from forests in China from 2000-16. Grey shows changes to other types of vegetation. White shows land with no vegetation. Source: Chen et al. (2019)

India, meanwhile, accounts for 6.8 per cent of the global net increase in leaf area, the study finds. This is roughly equal to that in the US or Canada—which both had three times more vegetated area in 2000.

While these greening trends are significant, it is important to note that they cannot make up for the loss of natural rainforests in the world’s tropical regions, says Prof Anja Rammig, a researcher of land-surface interactions from the Technical University of Munich, who was not involved in the study. She tells Carbon Brief:

“When you read this, it seems a bit like you could conclude ‘well this greening trend is driven by land-use activity and human-land management, so we are doing great’—but it is important to note that this will not offset, for example, loss of the Amazon rainforest. This greening trend we see from human activity cannot offset the loss of rainforest.”

This is also noted by the researchers of the study, who say in their paper:

“It is important to note that the gain in greenness, which mostly occurred in the Northern temperate and high latitudes, does not offset the damage from loss of leaf area in tropical vegetation – for example, in Brazil, Democratic Republic of the Congo [DRC] and Indonesia.”

(It is worth noting that the study did not look at how much natural forest has been converted into croplands.)

Another key finding of the research paper is that “human land-use” has been “a dominant driver” of global greening since 2000, the authors say.

One reason for this conclusion is that the study shows that cropland expansion has contributed the most to greening over the study period, they say. Six out of seven “greening clusters” (shown on the first map) “overlap” with regions known to have highly intensive agriculture. Rammig says:

“If you expect CO2 fertilisation to have a big effect, you’d also see strong greening in, for example, the Amazon region. But it’s not as strong there as in these highly managed regions.”

In other words, much of the greening observed on Earth has had more to do with direct human interference than the indirect effect of climate change or the CO2 fertilisation effect, says study co-author Prof Ranga Myneni, a research of vegetation remote sensing from Boston University. He tells Carbon Brief:

“Some have argued that greening is a good side effect of increased CO2 concentration. These generally tend to be [climate] sceptics. We now see that land-use by humans is a major factor of greening – something not recognised before.”