Litterbugs, not plastic manufacturers, are responsible for the plastic crisis: Asian plastics giant

While he acknowledged the duty of plastic producers to help tackle marine pollution by recycling more, an executive from one of the world's biggest plastic producers rejected the notion that producers are responsible for the problem.

The plastic crisis choking the world’s oceans is not the work of plastic manufacturers, but the people who carelessly discard the material, a senior executive for one of the world’s largest plastics firms has said.

Speaking at the SEA of Solutions conferences at the United Nations in Bangkok earlier this month, Richard Jones, senior vice-president at Indorama Ventures, a Bangkok-headquartered multi-billion dollar plastic manufacturer, said that while plastic firms have a duty to help tackle the plastic crisis, “we’re not responsible”.

“Plastic does not have legs. Somebody puts it there [in the environment]”, said Jones on a panel debating how finance can be used to fight plastic pollution.

Thailand has one of the highest road accident death rates in the world, but people do not blame roads or the steel used to make cars, Jones reasoned.

Have you ever seen an advertisement for a plastic bag? No. But there’s a demand for them. Companies are not forcing people to use plastic.

“It’s not the packaging [that’s the problem]. It’s how it’s used and abused. People need to dispose of litter properly,” he said.

High demand for plastic from consumers is at the heart of the issue, Jones said.

“Have you ever seen an advertisement for a plastic bag? No. But there’s a demand for them. Companies are not forcing people to use plastic. The inventor of plastic bags envisioned that people would reuse them,” he said.

The son of the inventor of the plastic bag, Swedish engineer Sten Gustaf Thulin, said in an article in British newspaper The Independent this week that plastic bags were invented as an alternative to paper bags, which were considered bad for the environment because they drove deforestation.

Plastic bags are a lot stronger than the paper variety, so could be used repeatedly—at least in theory, Raoul Thulin said.

Is recycling the answer?

Jones said he found the debate about single-use plastic pollution “annoying”, as while he agreed that there was no place for plastic in the environment, alternatives to plastic are not necessarily more sustainable, since many are harder to recycle.

In August, his company committed to invest US$1.5 billion in recycling plants in response to the rise in awareness of plastic pollution among consumers and pressure from regulators.

Indorama Ventures already operates 11 recycling sites around the world, including plants in Thailand, France and Mexico. In the last 12 months, it produced 5 million tonnes of polyethylene terephthalate (PET), the polymer used to make plastic bottles, packaging and textiles. 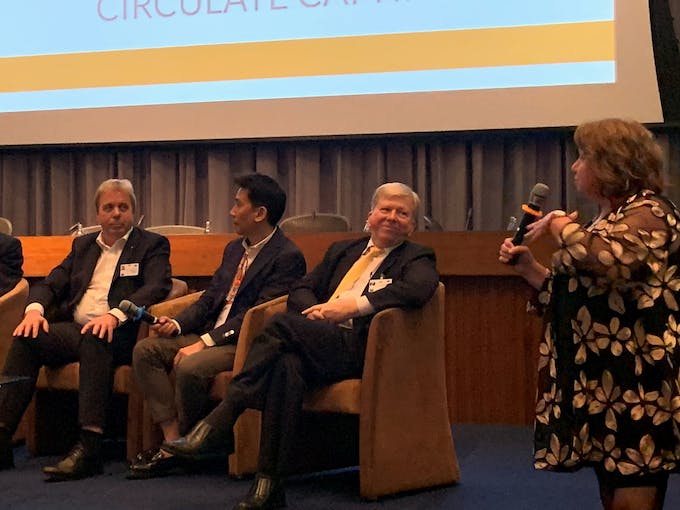 Richard Jones (centre, right) on a panel at the SEA of Solutions event in Bangkok. Image: Eco-Business

“The world needs to know that if you recycle, a lot of the problem goes away,” said Jones, who added that it is often forgotten that the plastic used in automobiles and planes makes them lighter, saving on emissions.

Jones said that all types of plastic can be recycled, although some types were more difficult to recycle than others. He added that he was “very surprised” when the Thai government announced it would ban the import of plastic to stem the flow of imported trash from the developed world following China’s waste ban.

“They [the Thai government] could have licensed companies to recycle, and made a lot of money. But they didn’t know how to handle the situation, so they shut everything down to stop it [the influx of plastic waste into Thailand],” he said.

Thailand does not allow old plastic bottles to be recycled, citing health and safety concerns, so bottles must be made from 100 per cent virgin plastic.

The perception that recycled plastic is considered “dirty” by Asian governments, companies and consumers emerged as an issue hindering the circular economy in Asia at the SEA of Solutions conference a week ago.

Jones said he is trying to persuade the Thai Food and Drug Administration to change its policy to allow recycled material to be used in new products; some 82 per cent of plastic bottles are collected in Thailand, he noted.

“They [the Thai government] are not aware of the modern recycling technology available, and they do not allow us to recycle old bottles into new bottles. It’s new for them. New knowledge takes a while to sink in,” Jones said.

Green groups, including the Break Free from Plastic alliance led by Greenpeace, say that recycling is not the answer to the plastic crisis, and producers should stop blaming Southeast Asian governments’ troubled rubbish collection systems for the problem while using recycling as a way to continue to use high volumes of plastic.

Big plastic producers and consumer goods firms such as Nestlé, Unilever, Coca-Cola, and PepsiCo, which profit from single-use models, need to stop expanding plastic use and invest in systems that prioritise reuse, the environmental advocacy groups say.

A report from the International Energy Agency, released in October 2018, found that plastic and other petrochemicals are becoming the biggest driver of global oil demand—ahead of cars, planes and trucks—and will make up nearly half of oil demand by 2050.