The recommendation by Germany’s coal commission that the country end its use of the fossil fuel in power stations by 2038 could breach a Paris Agreement-compatible pathway by more than a billion tonnes of CO2, Carbon Brief analysis shows.

If the German government adopts the recommendations, coal capacity would barely fall faster than a business-as-usual (BAU) pathway over the next decade. This is because ageing coal-fired power stations would be expected to retire anyway due to old age.

Compared to BAU, the proposed phaseout timeline would only start to reduce CO2 emissions after 2030. It would also breach the deadline for EU coal power to be phased out, as shown in the International Energy Agency (IEA) “below 2C” pathway.

In total, the commission’s recommended timeline could prevent a cumulative 1.8bn tonnes of CO2 (GtCO2) from entering the atmosphere compared to BAU, but could still breach the “below 2C” pathway by some 1.3GtCO2.

Carbon Brief runs through the key recommendations of the German coal commission and shows how, if implemented, they could impact emissions.

What is the German coal commission?

The German coal commission was launched in June 2018 by the ruling government coalition of chancellor Angela Merkel’s Christian Democrats (CDU/CSU) and the Social Democrats (SPD).

It is led by four co-chairs: two former premiers of coal-mining states, a climate economist and a former senior chancellery official. It includes representatives of federal ministries, states and parliament, plus 24 members drawn from politics, academia, civil society, industry and the regions.

It delivered its final recommendations on 26 January. These are non-binding, but government ministers say they will move quickly to implement them.

Clean Energy Wire has published a detailed explainer on the structure and history of the commission.

Why was the commission set up?

The commission was set up to find consensus on phasing out coal power in Germany. The country’s coal-fired power plants account for more than a quarter of national CO2 emissions and 7 per cent of the EU total. Their CO2 output is larger than that of the Netherlands and Austria combined.

Coal supplies nearly two-fifths of German electricity, a share that has barely fallen over the past decade. Germany—with its high-profile “Energiewende” energy transition—is frequently criticised because of its continued reliance on coal, which is one of the dirtiest fossil fuels.

In fact, Germany has the largest fleet of coal-fired power stations in Europe, as the chart below shows. It is also the fourth-largest fleet in the world, after China, the US and India. This makes the German coal phaseout internationally significant, both politically and for the climate. 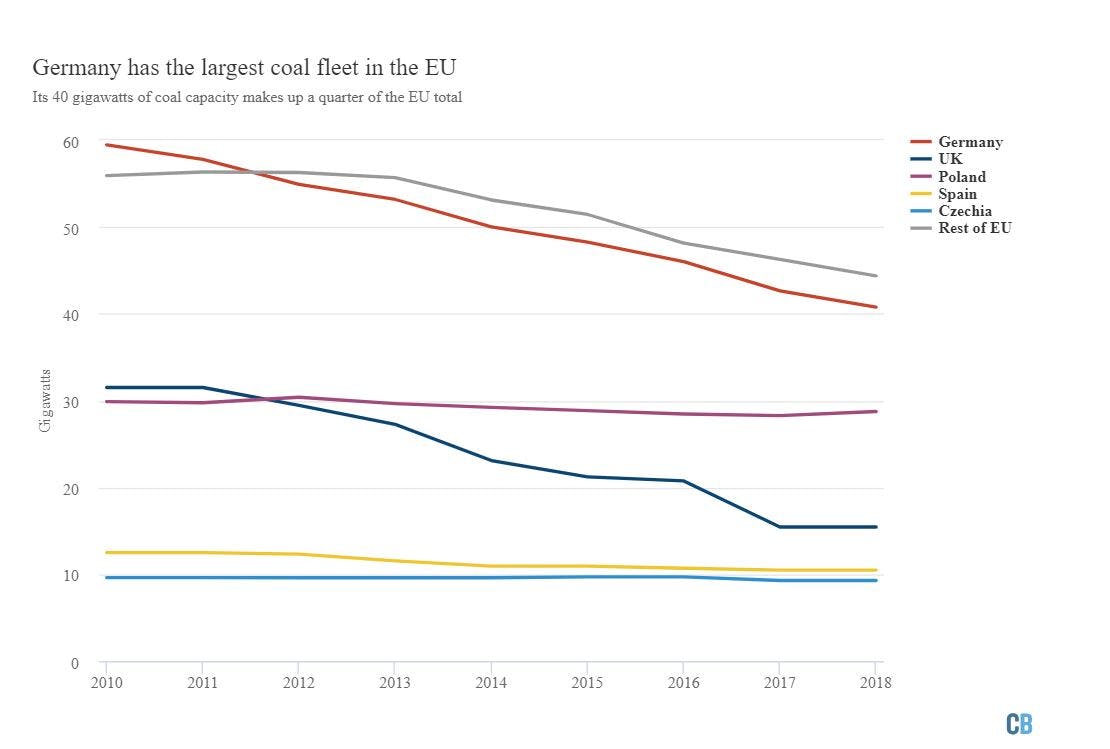 Slightly less than half of German coal power comes from hard coal, which burns relatively more cleanly, but is more expensive to extract. The larger portion comes from lignite, which is cheap, but dirty and is extracted at huge surface mines that scar the landscape.

What does the commission recommend?

The commission recommends a complete coal exit by 2038, with fixed reductions in power-plant capacity by 2022 and 2030. It suggests compensation for affected companies, workers, regions and consumers. This package could be worth up to €40bn, according to media reports.

See another detailed Clean Energy Wire explainer for more of the details.

The recommended timeline to 2030 (light red area in the chart, below) is close to what might be expected under business as usual (blue area), where plants close at historical average retirement age. [The notes at the end of this article describe the BAU pathway in more detail.] 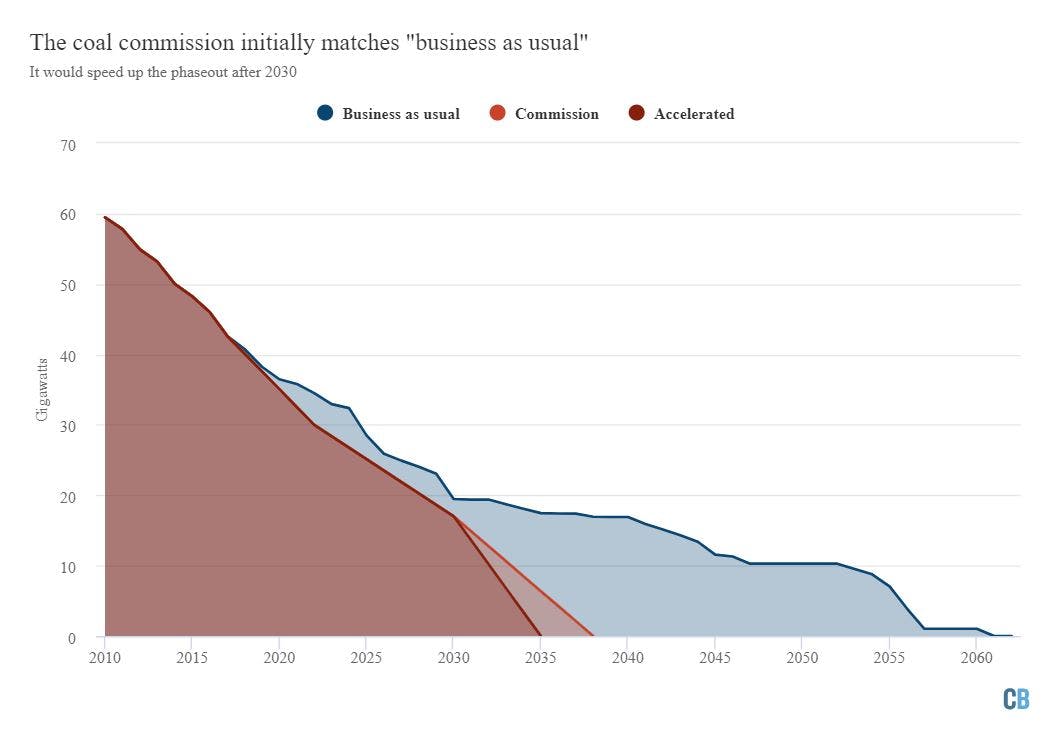 Only after 2030 does the coal commission’s proposal start to significantly bend the curve away from business as usual. In other words, it is recommending that forced early coal plant closures mainly take place after 2030.

For example, the Moorburg plant in Hamburg opened in 2015 and would be expected to operate until 2056, based on the average age at retirement for hard coal plants in Germany. Instead, the commission tlimeline suggests it would have to close by 2038 after a maximum of 25 years.

The coal exit timeline and compensatory measures will be reviewed in 2023, 2026 and 2029. The latter two reviews will also look at the end date, while a 2032 review will consider a 2035 phaseout. This potentially accelerated phaseout is shown in the chart above (dark red line).

The commission’s 336-page report is available in full (PDF in German). Its recommendations were agreed by 27 of its 28 members. A representative of villages threatened by coal-mine expansion voted against it. Greenpeace opposed the phaseout timeline, but backed the wider package.

Is the phaseout compatible with climate goals?

The coal commission worked towards Germany’s existing climate goals of an economy-wide cut in greenhouse gas emissions of 55-56 per cent below 1990 by 2030, and a 61-62 per cent cut for the power sector.

[The government has already accepted it will miss its 2020 emissions target by a wide margin.]

These targets sit within the EU goal to cut emissions at least 40 per cent below 1990 levels by 2030. It is important to stress, however, that all of these goals were set in the context of a 2C global goal.

The 2015 Paris Agreement significantly raised the bar with its target of limiting warming to “well-below 2C” above pre-industrial temperatures and, ideally, only 1.5C. The EU has pledged to raise its 2030 target and indicated it could commit to a net-zero goal in the longer term.

In this context, a German coal exit by 2038 (red line on the chart, below) would fall far short of what is needed to keep global warming below 2C (blue line). The 2038 timeline could result in cumulative emissions of around 1.3GtCO2 in excess of the below 2C pathway. This is roughly equivalent to 1.5 years of current annual Germany emissions. On the other hand, the 2038 phaseout could avoid a potential 1.8GtCO2 of coal emissions under a BAU pathway. This is because of early coal plant closures in the period after 2030.

An accelerated 2035 phaseout would be roughly in line with the IEA’s 2C pathway, Carbon Brief analysis suggests, but not its “below 2C” scenario.

Carbon Brief took data on coal-fired generating units in Germany from the Europe Beyond Coal database and reconciled the figures with those from the German federal network agency (BNA), which formed the basis of the coal commission’s work.

In Carbon Brief’s business-as-usual scenario, coal units retire at the date already scheduled, if one has been announced. Otherwise, hard-coal units retire after 41 years and lignite units after 45 years. These are the average retirement ages for already-closed German plants in the database.

There are also a number of older coal units still operating past these average retirement ages. In the BAU scenario, these units retire in phases in 2020, 2025 and 2030, if they are 55 years old or more at that time.

Annual CO2 emissions for each pathway are estimated using the average load factor and emissions intensity for hard coal and lignite units in Germany over the past five years.