The smoke has not fully cleared yet hazy strange things are cropping up at the edges of an orangutan sanctuary in Central Kalimantan, which the Indonesian police have designated a possible crime scene.

Greenpeace Southeast Asia released several images on Thursday of freshly planted palm oil saplings on the burnt land at the edges of the Nyaru Menteng orangutan sanctuary. Field workers from the group took the photos when they visited the area on October 27.

Indonesia is still grappling with the massive haze that started in Sumatra province and engulfed neighbouring Singapore, Malaysia, Thailand and some cities in the Philippines as millions of hectares of land were razed in nearly three months. The haze has eased since last week after rains fell in the region.

Based on publicly available maps, there is no palm oil concession in the area, the campaign group said in a statement.

The group has called on the Indonesian government to revitalise all forest and peatlands that have been burnt to make sure no one profits from the fires. 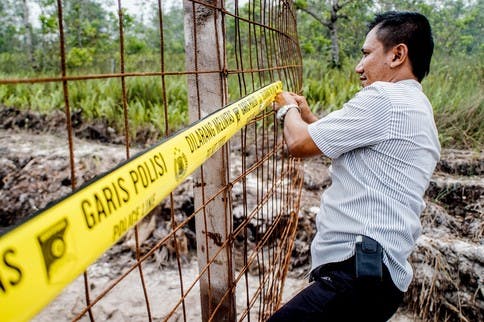 An Indonesian policeman cordons off the area at the edges of the Nyaru Menteng orangutan sanctuary. Image: Ardiles Rante/ Greenpeace

Annisa Rahmawati, a forest campaigner for Greenpeace, commented: “It is unthinkable that anyone should be allowed to profit from such a crisis. President Jokowi has called for restoration after the fires – and that must mean restoring forests and peatlands, not planting with oil palm.”

President Joko “Jokowi” Widodo reiterated late last month his 2014 promise to push for a stronger moratorium on peatland development, including restoration of drained peat swamps. However, new regulation has yet to be issued.

Peatlands are waterlogged areas in the forest which do not burn easily unless they were drained and left to dry, according to scientists at the Bogor-based Center for International Forestry Research (CIFOR). However, rampant clearing of forests and drying of peatlands for palm oil or timber plantations have left these areas highly at risk to fires, especially during the dry season. 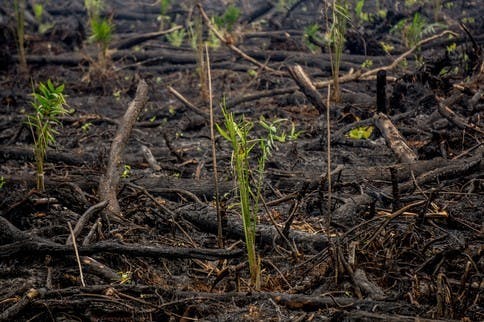 “The dried-out peat ignites easily, burns underground and creeps under the surface,” CIFOR said on its website.

Greenpeace said a similar photo of palm oil saplings planted in rows among burned tree stumps - taken by Sutopo Purwo Nugroho, chief of data and information at the National Disaster Management Agency and posted on his twitter feed - went viral on October 20.

The photo has a caption that says, “After the fire, comes the oil palm”.

The Indonesian Palm Oil Producers Association or GAPKI dismissed the social media post as part of a smear campaign against the palm oil industry, which produces the cheapest and hence most widely used vegetable oil product. 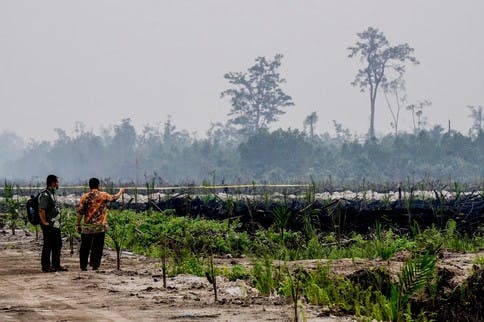 The owner of the land planted with new palm oil saplings cannot be identified as the Indonesian government has not released any new map on concession areas. Image: Ardiles Rante/ Greenpeace

Eddy Martono, head of the land and spatial division at GAPKI was quoted by The Jakarta Post as saying: “The smoke is still rising, but the palm trees have already been planted. This is very strange. Based on cultivation techniques, it is not possible to plant the young palm trees [on such land], as they would wither. Something is hidden, and I have no idea what it is.”

He suspected that a call to boycott palm oil will follow suit, but did not point out who or which group could be behind the smear campaign.

However, people in the area told investigators that the land where the new palm samplings were found were burnt twice about a month ago. This suggests that it was intended for cultivating palm oil, Greenpeace said.

The police is currently investigating the area to find out if the fires were started on purpose.

Greenpeace’s Rahmawati pointed out that at present, the public does not know the identity of the landowner as the Indonesian government has not issued any new maps on concession areas.

“We won’t know until the government makes good on its promise to publish concession maps and hold those responsible for these fires to account,” she said.