Empathy will help the world change course on climate change

Taking a stand against climate change begins with empathy and awareness, said speakers at the launch of a new film and photography exhibition that aims to inspire small actions for big change.

Small actions can have a big impact and individuals must believe in their ability to make a difference in the fight against climate change, said experts at the launch of Eco-Business’ film and photography exhibition this week.

“The government cannot tackle climate change alone. We need industry, households and individuals to play active roles. This is why we designated 2018 as the Year of Climate Action—to raise awareness on climate change, and to spur collective action,” said Masagos Zulkifli, Singapore’s Minister for the Environment and Water Resources, who was attending the official opening.

Bringing about a better understanding of climate change and spurring the public to take action is exactly what the exhibition Changing Course aims to do. The exhibition features photos and a short documentary about Antarctica created and curated by Eco-Business managing director Jessica Cheam and Scottish documentarian Fraser Morton.

They are a visual record of the duo’s experiences as part of the ClimateForce: Antarctica 2018 expedition in March, which was led by British environmentalist Sir Robert Swan. Part of Eco-Business’ year-long Changing Course campaign, the exhibition seeks to help the public understand the relationship between Antarctica and Asia. 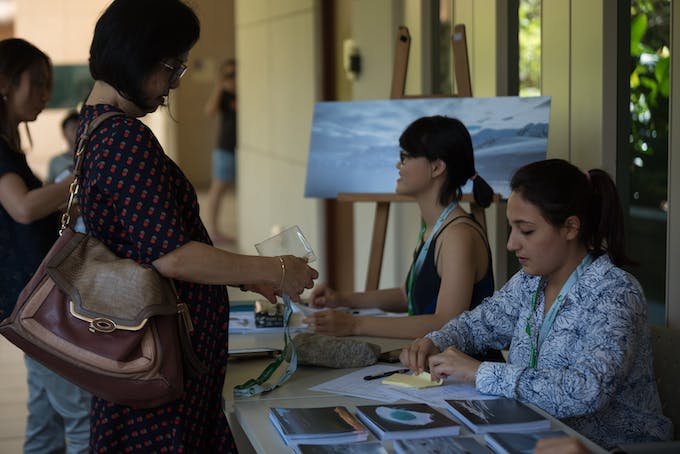 Guests at the launch of Changing Course. Image: Eco-Business

Earth’s only uninhabited continent holds 90 per cent of the world’s freshwater, but is heating up faster than anywhere else due to climate change. Melting glaciers could flood coastal cities such as Jakarta and Shanghai by the end of the century if global warming is not stopped.

Photos and documentary From Asia to Antarctia are on display at the Green Pavilion in the Singapore Botanic Gardens until 12 July, with satellite exhibitions at the Marina Barrage and OCBC bank branches.

The launch also celebrated United Nations World Environment Day, held on 5 June every year, with plenary dialogue ‘From apathy to action: How to shape the climate conversation’.

Speakers emphasised the need for empathy to combat indifference towards climate change, and the possibility for a single person to make an impact.

Olam Group’s global head of corporate finance, Srinivasan Ventika Padmanabhan told the audience that empathy resides in every human being as does the capacity to take action. “We can create and make a change as long as we believe that we need to make a change,” he said.

Michael Maniates, professor of social science and founding head of studies of Environmental Studies, Yale-NUS College, highlighted the power of just a small number of people getting together to think strategically, question the status quo and move social systems.

“Many students believe that nothing can happen until you have 60, 70, 80 per cent of people buying in to an idea. And that is a real prescription for cynicism and despair, because you never get that [realistically],” he said. 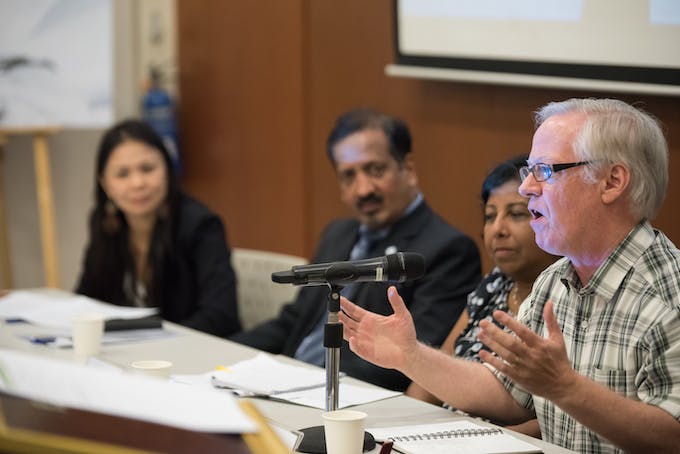 Professor Michael Maniates, Yale-NUS College, speaking at the plenary discussion ‘From apathy to action: How to shape the climate conversation’. Image: Eco-Business

The now-widespread ban of sharks fin in Singapore was driven by the local diving community and is an example of how consumers can make a change, said Isabelle Louis, deputy regional director of the United Nations Environment Programme, Regional Office Asia Pacific.

She shared: “Singaporean divers spoke up and said to the supermarkets, ‘We want you to remove canned tuna that contains shark fin!’ and that made a great impact. The power of small can actually be big.”

Riding on the momentum generated from the launch of the Changing Course exhibition, real estate developer City Developments Limited (CDL) that sponsored Cheam’s participation in the 2041 expedition announced the next edition of the  CDL E-Generation Challenge 2018. The winner of this year’s competition will travel to Raja Ampat in Indoesia with Dr Sylvia Earle, legendary deep-sea diver, marine biologist, oceanographer, explorer, educator, author and founder of Mission Blue.

Eco-Business also unveiled a partnership with US-based adventure travel company The Explorer’s Passage on the ClimateForce 2019 expedition to the Arctic in June 2019. Eco-Business will be joining the expedition to film the sequel to From Asia to Antarctica, and help to select and support candidates in Asia who want to join the expedition.

“We are still in the midst of planning the Arctic expedition, and we hope to interest those who have a passion for climate issues to apply for this excellent opportunity to examine and learn about the situation there, and why what’s happening in the North and South Poles is important for Asia,” said Eco-Business’ Cheam.

The Singapore-based sustainability media organisation will also continue raising awareness about climate change through the Changing Course campaign. “Eco-Business will be organising further climate action activities for the rest of the year with our various partners, including talks and events around our focus topics—renewable energy, zero waste, sustainable lifestyles and youth,” she said.