Even though they are a small nation, Singaporeans think it is important to fight climate change. But they are confused about how, a new study has found.

The citizens of Singapore largely reject the idea that their country is just a ‘red dot’ on the map, too small to matter in the context of climate change.

However, it is also true that Singaporeans are sceptical about whether they can meaningfully make a difference as individuals.

These are the findings of a recently released report titled Motivating Climate Action from Climate Conversations, a non-profit organisation that seeks to raise awareness of climate change, and Milieu, a consumer data analytics firm.

The survey asked 3,530 members of the public what they knew about climate change and their motivations to act on the problem.

Some 93 per cent of the city-state’s citizens believe that climate change is due to human activity, so Singapore has avoided the polarised debate in the West on the fictitious nature of the changing environment.

We are starting to chip away at the idea that climate change is a far off problem that is going to affect future generations.

However, this knowledge does not run very deep.

“You can see that people agree climate change is caused by anthropogenic factors, but when they are given more choices, opinions vary,” said Dr Nanthinee Jevanandam, the director of Earthys, a sustainability consulting firm based in Singapore.

While a majority (52 per cent), believe that burning fossil fuels is the leading cause of climate change there was a significant number of respondents who were confused by the incorrect alternatives provided in the study.

Of the red herrings in the questionnaire, the most popular was natural changes in weather patterns (13 per cent) followed by volcanic eruptions and artificial intelligence (2 per cent) as the root cause of the changing climate.

The vast majority of Singaporeans believe they will experience these impacts within their lifetimes and about half believe that they will see the effects of climate change within the next 20 years.

“We are starting to chip away at the idea that climate change is a far off problem that is going to affect future generations,” said Chris Jensen, the co-founder of Climate Conversations.

For the general population, there is a recognition that climate change is going to affect us during their lifetimes, he said.

An overwhelming proportion of Singaporeans (93 per cent) agreed that tackling climate change is a moral duty and society should prioritise climate action. Yet they also feel that society at large is on board with this idea.

“When how we feel and what we believe is not shared sufficiently then we have a tendency to feel like we are the odd ones out,” Jevanandam said.

Jensen added that people are much more hesitant to talk about climate change, due to a lack of deeper knowledge about the issue and the belief that others are not interested in the topic. 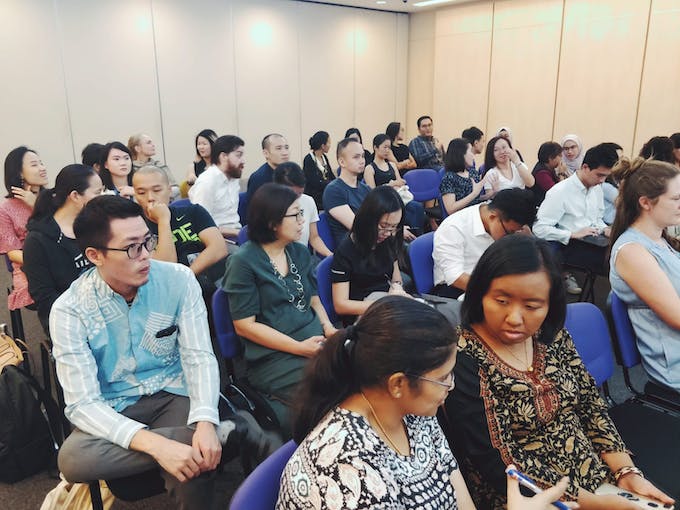 “People clearly feel a sense of responsibility, but they are feeling very disempowered,” Jenson remarked.

“The majority of the responses reveal that people want to do something but don’t know how and end up feeling hopeless. They feel like their actions aren’t enough, and expect the government to take responsibility.”

More than half of the respondents are unaware of the meaningful action that they can take, but three in 10 don’t think their actions will make a difference.

According to Jevanandam, this is due to the misalignment of the messaging around climate change and the low awareness of actions that can be taken to address the issue.

Citing the example of the office practice of ‘saving paper’, she explained that while employees are often urged to be conscientious of their paper use, the same office will mandate single-sided printing. This ambiguity, according to Jevanandam, is the root of the sense of disempowerment.

She added: “There has to be alignment between the message that is being put out there and what is being practised. This will help make people feel more empowered to take action.”

A sense of responsibility

The report proposes actions that organisations and individuals can take to spread the word on climate change in Singapore.

The first is to acknowledge that people want to take meaningful action, which is aligned with what they believe in. Only 12 to 16 per cent of the public in Singapore are motivated to take action on climate change in order to benefit themselves personally, for example in the form of financial reward or to boost their curriculum vitae.

Jensen concluded: “There is a strong sense of responsibility from Singaporean citizens to act. The report demonstrates that citizens are best motivated by concern for the future and for others, much more than personal rewards like money, job or status.”