Creating the new power reality in 2025

Sustainability advisory and energy firm DNV GL envisages a future where energy is personalised at the consumer level and where prevailing technology trends will combine as one perfect storm to create a new power reality.

By 2025, consumers will be able to buy energy like they are buying a box of cereals: they can source, compare prices and better understand their electricity supply.

Super grids will be able to  transport energy over long distances, and buildings will have morphed into micro-grids, moving beyond just consuming to also generating energy and delivering it to consumers.

Digitalisation will be the common thread that spurs these technological advances. And where Europe and the United States were the epicentre of global economic activities in the 1990s, that spot will be taken by Central Asia, as it will drive much of these global innovations in the next decade and beyond.

Investors looking to venture into the energy market will find their money is safest in the renewable energy sector, and solar PV will be the cheapest form of electricity in many regions of the world.

According to sustainability advisory and energy firm DNV GL, these are just some scenarios of what the global energy landscape will look like over the next 10 years.

The predictions are outlined in the report Technology Outlook 2025,  which the Oslo-based multinational launched before a worldwide audience in Shanghai, China on April 26.

Many of the technologies we highlight are familiar. What is new, in our view, is that the coming decade is about the combination of advanced technologies – where concepts such as automation, data-driven insights and grid parity acquire real meaning and scale.

“Many of the technologies we highlight are familiar. What is new, in our view, is that the coming decade is about the combination of advanced technologies – where concepts such as automation, data-driven insights and grid parity acquire real meaning and scale,” he says.

Headquartered in Oslo, Norway, the company operates in more than 100 countries and employs 15,000 professionals. The core work of DNV GL is helping their customers address increased operational complexity while making processes smarter for business, safer for employees, and more sustainable for the planet.

For the energy sector, DNV GL says that an interplay of top energy technologies, powered by user-friendly digital ICT platforms, will override the way energy is created, bought, and shared today, and give rise to the “new power reality” in 2025.

For consumers, this means personalising energy, from purchase to consumption, and even to creation. They will have greater options to buy from cheaper and cleaner sources and more consumers will be able to create energy for personal use.

Theo Bosma, GNV DL’s director for group research & innovation for energy, notes that the implementation of these new technologies “will be a game changer in the next 10 years, accelerating the energy transition.”

These are the top 10 energy technology trends that DNV GL believes will deliver the new power reality in 2025:

1. A move towards electrification. On a broader scale, there will be greater reliance on electricity in almost everything people use every day. Cars, trucks and more vehicles will be battery-powered and heat pumps – mechanical devices that transfer heat from a colder area to a hotter one – will replace heating technologies that previously relied on gas and oil. This will increase energy efficiency and reduce environmental impacts.

2. New materials in energy. Similarly,new materials such as graphene in solar, hybrid solar cells and wide-range bandgap semiconductors will be introduced. Such semiconductors are widely used to deliver energy to devices that require higher voltages, frequencies and temperatures, such as military radars. In the next decade, this technology will be available for commercial uses as well. Using these semiconductors will increase the reliability, performance and efficiency of the next generation solar panels and electric grids.

3. Digitalisation. Increased digitalisation will spur technology innovations on energy. A highly digitalised energy system will lead to more, faster and better data, increased computing power and better connectivity of all elements in the power system.

4. Wind: larger and smarter. Wind turbines in the new power reality will have light, flexible blades and aerodynamic control devices that allow them to better utilise the wind. Further, innovations in control systems will include smart sensors that will detect when turbines need to deliver energy to the electricity grid.

5. A more advanced solar PV technology. Solar PV technology is expected to advance by even greater leaps and bounds, further driving down the costs of solar PV by 40 per cent by 2025. A future where windows and walls can harvest energy from the sun will not be unthinkable. As such, DNV GL says solar will be the cheapest form of electricity in many regions of the world by 2025.

7. More customer-centred energy demand response. There are communities in the world today where the cost of energy is higher for lower-income households. In other cities, people living in areas with hotter summers end up paying more for energy when demand is higher.

In the future, response to energy demand will be more customer-driven, and will be made more predictable using a systems perspective approach. 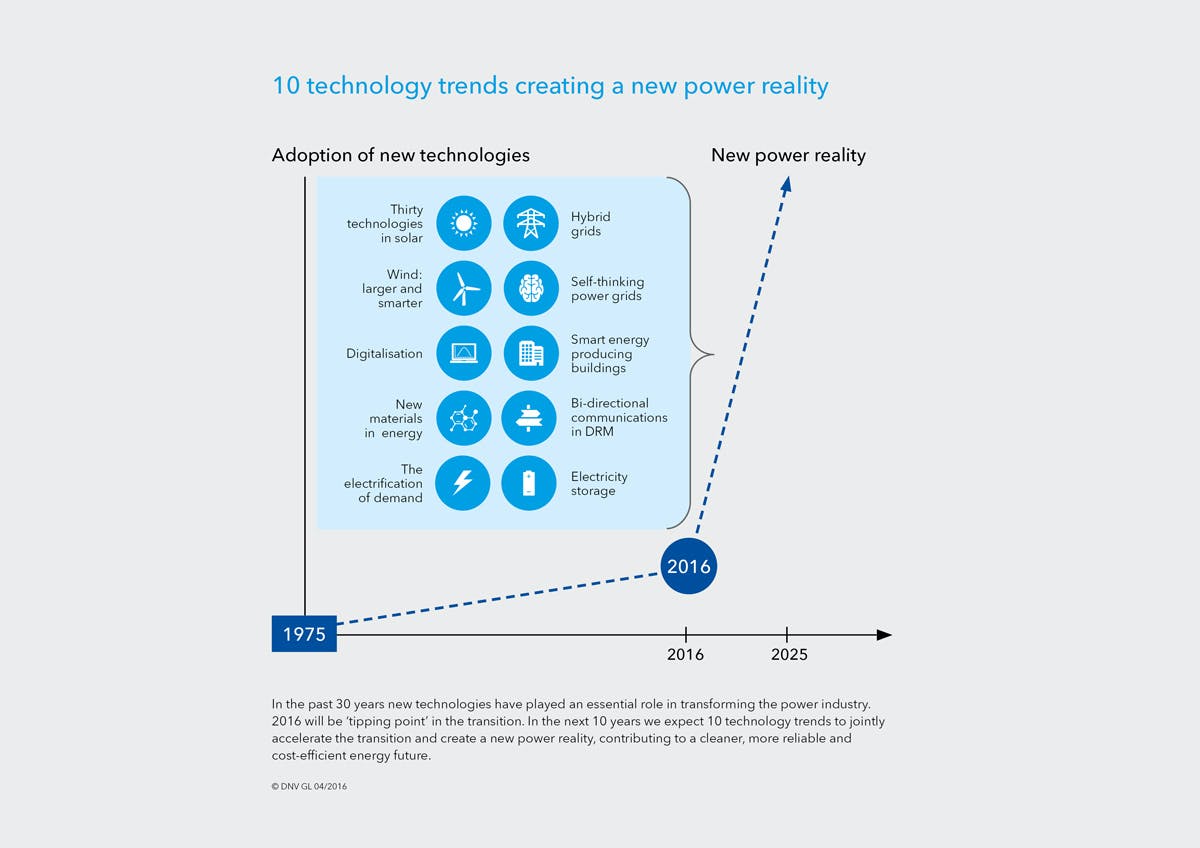 9. Self-thinking power grids. The future sees grids being remodelled to be able to manage themselves, allowing for self-configuration to cut reduction losses, self-adjustment to address voltage variations and self-optimisation to mitigate disturbances.

This evolution will, however, raise different challenges, including questions about how to validate the safety and reliability of the system. In response to this, grids will be tested for design and management under a new systems context.

10. Hybrid grids. In the future, a technology called High Voltage Direct Current is seen to be the most cost-efficient way to transmit energy over longer distances. Existing AC grids will evolve toward hybrid grids, which feature more HVDC connections within and between AC power systems. In this way, grids are evolving into combinations of AC and highly-controllable DC systems.

Bosma says: “Alongside customers and industry partners, we will continue to push these developments through our joint industry projects and advisory, testing, inspection and certification services to ensure a clean, affordable and safe energy future.”