Almost all procurement managers now look for sustainably-produced material in their purchases, according to a new survey – which also comes as analysis of corporate deforestation commitments showing a dramatic rise.

More and more companies are incorporating sustainability criteria into their procurement activities, according to new research released February 7.

The findings echo those of the Forest Trends Supply Change project, which shows steadily increasing corporate action to halt deforestation.

The new Barometer report is built on a survey of 120 procurement officers, primarily in the manufacturing and retail sectors.

Ninety-seven percent of the respondents listed sustainability it as one of their top five priorities, up from 93 per cent in 2013. Sustainability, however, has yet to make the top three overall, which are:  cost savings, compliance and risk reduction.

This increase in intent is also reflected in Supply Change, which tracks corporate commitments to reduce deforestation related to the “big four” commodities responsible for most deforestation – namely, soy, palm, cattle and timber & pulp.

It’s seen the number of commitments increase from 307 in early 2015 to 579 in June of last year to 764 now. A new analysis of findings, due in March, is expected to show a dramatic increase in transparency around the implementation of those pledges. 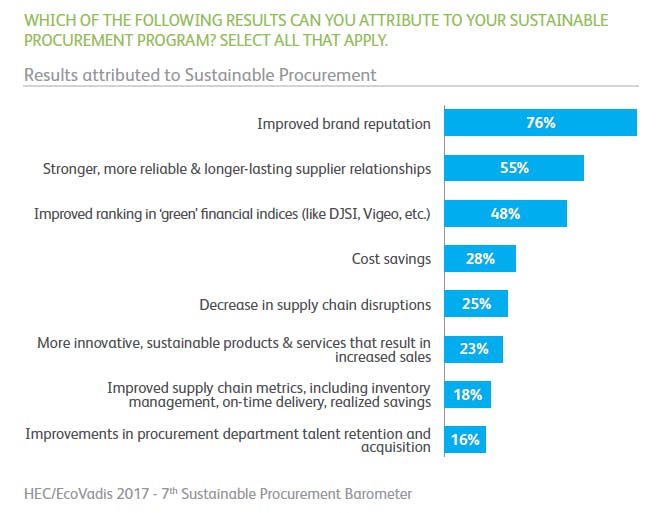 Fifty per cent of the businesses that started incorporating sustainability into their procurement early reported increased revenue from the sustainable and innovative products and services they have sourced.

Authors refer to them as “sustainable procurement leaders”, and they meet certain criteria regarding sustainability measures, supply chain visibility and guidance on supplier performance.

“It may take five or more years to reach upside returns from your sustainable procurement program” authors write. “However, as programs mature toward the ‘Sustainable Procurement Leader’ profile – whose programs are on average older than non-leaders – they begin reporting strategic upside benefits like increased revenue, improved relationships, and enhanced brand reputation.”

Among the report’s other positive findings, 57 per cent of respondents placed more importance on environmental risks and impacts though just 18 per cent placed significantly more importance.

Companies are thinking more about business ethics and labor issues, however, as 33 per cent of respondents put significantly more importance on these topics.

Meanwhile, sustainable procurement programs expanded dramatically, as 45 per cent of companies reported they covered 75 per cent of volume spend with their strategic supplier base.

Though companies have far to go to achieve sustainable procurement, and some of the analysis’ numbers report dismal progress. Supply chain visibility on sustainability remains low.

The challenges companies reported varied considerably from the 2013 analysis. This year, lack of executive or board support didn’t make the top three challenges while three years ago, it topped the list.

“While executives are finally on board, procurement teams still report that a lack of internal resources holds them back,” Thaler said.

Report authors say this lack of resources could mean a couple things. Perhaps CEO’s are simply talking the talk, claiming sustainability efforts but failing to adequately equip the department with the necessary resources.

Or, the bosses are indeed championing sustainability and the procurement team is lacking the right combination of technology and people using the best approach.

What do the suppliers think?

EcoVadis also surveyed hundreds of supplier entities and asked them how serious they thought the companies they supplied were about greening their operations.

Majority of respondents hailed from the manufacturing sector though there was representation from the chemical and telecommunications spaces. Of the 360 suppliers surveyed, 56 per cent said sustainability was not a priority for many of the companies they supplied for.

Essentially, the findings reveal suppliers are most motivated to act through performance targets and collaboration with buyers over best practices.

“The time has come for a new era of supplier relationships,” authors write.

Ultimately, EcoVardis’ analysis reassures companies with sustainable procurement programs to stay the course and make plans to scale up while encouraging those who haven’t started to do so.

“The sustainable procurement landscape shows more promise in 2017 than in any previous years,” the authors say. “We encourage CPOs around the world: do not wait!”

“The more procurement teams push to integrate sustainability in their daily roles and decisions, the greater – and faster – the trickle-down effect will be on a global scale,” said Thaler.