Certification is no ‘silver bullet’ to stop deforestation

Certifying forests will not stop deforestation and the haze, but it is an essential “spanner in the toolbox” for the growing number of Asian businesses that want to use sustainable wood products, PEFC's Ben Gunneberg said at an event in Singapore recently.

After giving a talk expounding the benefits of sustainability certification in Singapore last week, Ben Gunneberg, chief executive officer of the world’s largest forest certification body, the Programme for the Endorsement of Forest Certification (PEFC), was asked a particularly awkward question.

How can PEFC justify certifying products made by Asia Pulp and Paper (APP) and Asia Pacific Resources International Holdings Limited (APRIL), when these two companies have been blamed for clearing vast areas of Indonesian rainforest? Local communities and some of the richest biodiversity on earth depend on this land, and clearing it not only destroys lives and habitats, but also contributes to the haze pollution that suffocates Singapore and its Southeast Asian neighbours almost every dry season.

In a three-minute response, during which time an area of forest the size of 150 football fields was lost to chainsaws and bulldozers around the world, Gunneberg conceded that certification is not a “silver bullet” to solve the many problems facing forests, referred to as “the lungs of the planet” in a promotional video played before his talk. 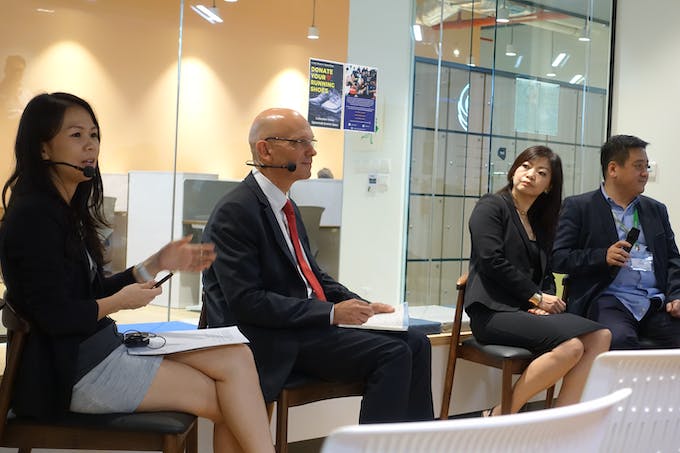 It is, he said, just a tool that can be used to get governments and businesses on the right track towards sustainable forest management, encourage best practices, and help forest product users to “leapfrog” the tarnished image the sector has suffered over the years.

“Why did we certify them [APP and APRIL]? Because they met the requirements of PEFC,” he told the 50-strong audience at a lunchtime talk on PEFC certification, organised by Eco-Business on Thursday.

In contrast, neither APP or APRIL are certified by PEFC’s big rival, Forest Stewardship Council (FSC), which itself has come in from criticism from environmental groups for certification standards that do not go far enough to protect natural forests and local communities.

Though similar, PEFC is not a standards agency like FSC, which sets out principles of responsible forest management for companies and governments to follow. PEFC is a mutual recognition scheme, focusing not only on the ethical aspects of sustainable forest management, but also on the supply chain.

For a business to be PEFC certified, and for its products to carry its ‘green trees’ logo, they must be regularly audited by independent third parties to ensure that their production is not linked to the destruction of ecologically important forests or the violation of the rights of local communities that depend on the land.

Acknowledging that APP is working towards reassociation with FSC, a process that was made public last month, Gunneberg commented: “Will that stop another haze from happening? It definitely deals with the issue of fire fighting within the plantations, but the communities around those plantations have got to be helped.

I stand by the value of certification. It gets us to a place where we have a better understanding of the issues. It’s not just a question of good or bad.

Gunneberg pointed out that both APRIL and its larger rival APP had put in place hitherto successful programmes to combat the culture of land burning in Indonesia over the last few years, by engaging with the local communities and smallholder farmers who are most often blamed for burning forests. Both companies have also pledged to stop clearing natural forests, relying only on plantation timber to feed their pulp and paper mills.

“I stand by the value of certification,” Gunneberg said. “It gets us to a place where we have a better understanding of the issues. It’s not just a question of good or bad.”

He suggested that the response to the haze from some Singapore entities had been too severe, saying it had been “too simple” for retailers NTUC FairPrice, Sheng Siong and Prime Supermarket to remove APP brands from their shelves after it emerged that many of the fires were burning on APP’s concessions. These brands had shown little understanding of the issues behind the haze, said Gunneberg. 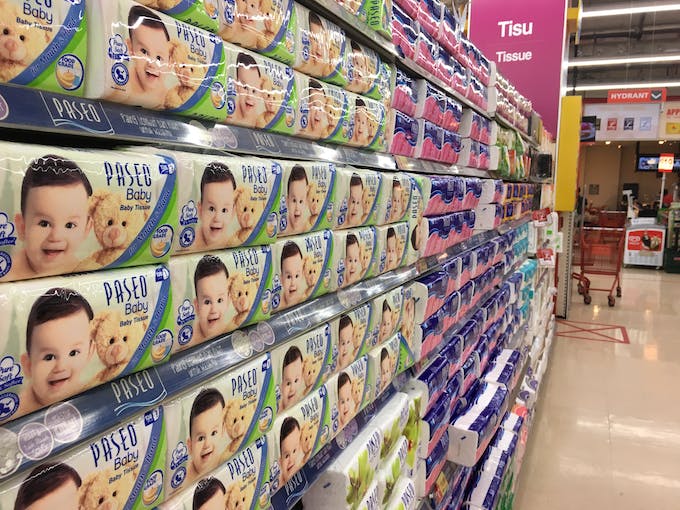 APP’s Paseo brand for sale in a supermarket in Jakarta, Indoneisa. Image: Eco-Business

APP tissue brands including Paseo, Jolly and Zenses were removed from the shelves after a green label certification from Singapore Environmental Council was rescinded. The brands have not returned to the supermarket’s shelves since.

“It is sometimes too simple for people to pull products off the shelves, or for the government to do something without understanding the wider implications,” he said.

“We have to look at why this is happening, and why these forest fires occur. Why would a company want to burn its own forests?” added Gunneberg. APP’s own plantations lost 86,000 hectares to the peatland fires of 2015, which were the worst on record.

Noting that 80 per cent of the world’s poorest people live in and around forests, Gunneberg continued: “How are local communities supported when they are burning the land? They’re allowed to burn land, and fires get out of control.”

The value of forests

Despite the limitations of certification, it is a rapidly growing industry. PEFC membership for instance grew 20 per cent in the last year; and the area of PEFC-certified forest has grown from 3.5 million hectares to 13 million hectares in three years.

Asia is the fastest growing region for the Switzerland-based organisation, and Gunneberg has spent the last three weeks here, starting in Indonesia, then Japan, China, Korea and finally Singapore, to promote the value of certification.

Key among PEFC’s priorities is to push for companies and governments to get chain of custody certification, meaning that material can be tracked from the forest to the final product to ensure it came from sustainably management forests. Another is to certify trees growing outside of forests, for instance around rivers or lakes, Gunneberg noted that 80 per cent of trees that feed paper mills in India come from trees outside of forests.

Key countries in Asia where PEFC wants to certify are those under the most threat from deforestation, including Myanmar and Cambodia. For a country to get PEFC certified, it must first set up its own national certification body organised according to PEFC guiding principles.

New Asian members include South Korea and Thailand, while Laos and the Philippines and Mongolia have shown interest in setting up their own systems, Gunnerberg shared.

Once a country gets certified, there is often a knock-on effect that prompts other countries to follow suit, said Gunneberg, who pointed out that after China developed a national forest certification system, Japan did the same soon after.

If we use concrete, we are emitting CO2. But if we go with wood-based material, we will reduce our carbon footprint.

One obstacle is the relatively low awareness of the PEFC logo among consumers. According to research from the certification body, awareness of the logo is highest in Germany, where it is 30 per cent, but in Japan is only around 5 per cent.

Another is forestry’s poor reputation, and its association with deforestation, climate change and biodiversity loss. Gunnerberg said that sustainable forest management could contribute to almost all of the United Nations’ Sustainable Development Goals (SDGs), including those applicable to water.

The SDGs are a set of aims, such as eradicating poverty, building sustainable cities, fighting climate change and protecting life on land that the world is working to meet over the next 13 years.

Forests can also contribute to the most valuable SDG for businesses in Asia, as highlighted by a recent report by Business and Sustainable Development Commission (BSDC): Affordable housing.

“There are 1 billion people in the world who live in and around slums. And we’ve got to create accommodation for about 2 billion people over the next 30 to 40 years,” said Gunneberg, pointing out that cross-laminated timber is a more environmentally friendly building material than steel or concrete.

More than 107 million urban households live in sub-standard housing in China, India, Indonesia, Bangladesh, and the Philippines, and businesses could generate US$295 billion from building affordable, sustainable homes, the BSDC study found.

“If we use concrete, we are emitting CO2. But if we go with wood-based material, we will reduce our carbon footprint,” he said.