World can ‘safely’ store billions of tonnes of CO2 underground

Storing billions of tonnes of CO2 underground would be a “safe and effective” way to help limit the effects of climate change, a new study says.

The research suggests that large amounts of CO2 could be stored under the ground or sea with only a small risk of surface leakage in the following 10,000 years. However, if CO2 storage is poorly managed, higher amounts of leakage can be expected.

The findings help dispel common “misconceptions” about the dangers associated with CO2 storage, a scientist not involved in the study tells Carbon Brief.

Carbon capture and storage (CCS) is a process whereby CO2 is “captured” from the air and then transported to a storage site—which could be, for example, a depleted oil or gas field or a deep rock reservoir beneath the sea.

Though the technology is currently restricted to a few small pilot projects, many view its large-scale development as an essential step to limiting the effects of future climate change.

In its most recent assessment report, the Intergovernmental Panel on Climate Change (IPCC) concluded that avoiding dangerous climate change would cost twice as much without CCS.

One barrier to the development of CCS is the costs associated with directly capturing CO2 from the atmosphere. Another barrier is the fear that, once underground, stored CO2 could leak out into the atmosphere.

It is this second barrier that is addressed by the new research, which is published in Nature Communications.

To address the question of leakage, the researchers developed a new model—known as the Storage Security Calculator—which looks at what would happen if 12bn tonnes of CO2 were injected under the ground and left for 10,000 years. The 12bn-tonne target reflects the EU’s ambition for CO2 storage by 2050.

The findings suggest that—providing a suitable storage site is chosen—the risk of CO2 leakage would be minimal, says lead author Dr Juan Alcalde, a geologist at the University of Aberdeen. In a video filmed at the sidelines of this year’s European Geosciences Union (EGU) General Assembly, he explains the study’s main findings to Carbon Brief.

To understand what would happen to CO2 stored underground, the researchers considered all the ways it could escape back into the atmosphere (“leakage inputs”) and all the ways of permanently trapping it underground (“immobilisation inputs”). A schematic summary of these inputs is shown in the diagram below. 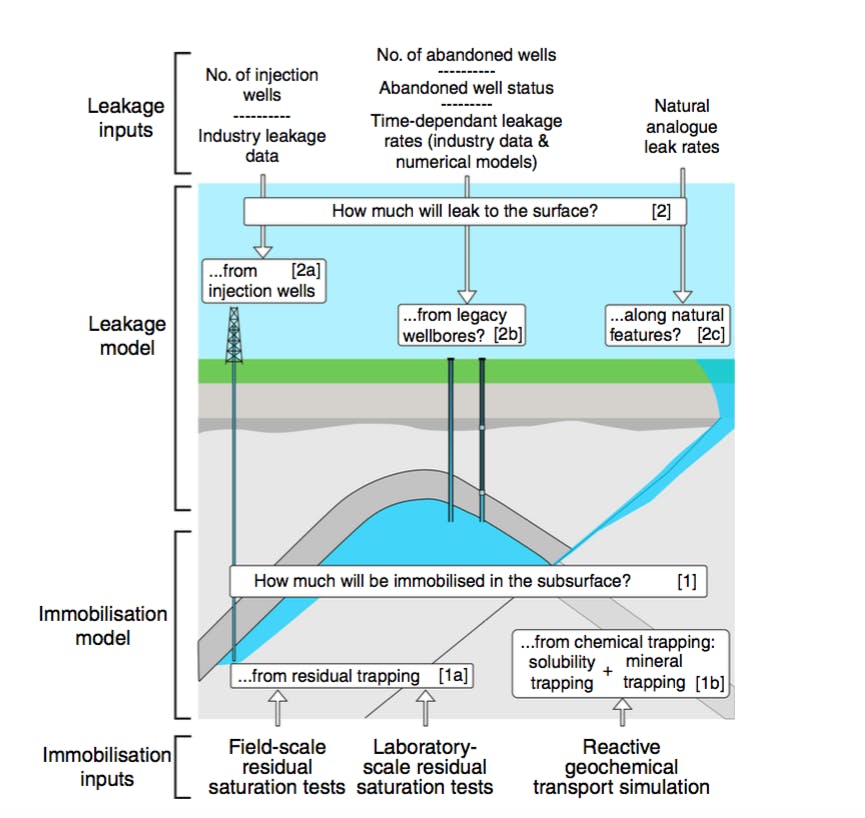 The first way that stored CO2 could leak is through the wells used for CO2 injection (2a on the diagram), Alcalde says:

“Anything can go wrong; accidents happen and they’re usually fixable but a little portion of CO2 will leak back to the surface, so we account for that.”

To calculate the total risk of leakage from injection wells, the researchers considered how many wells would be needed and looked at the available data from CCS projects to see how often such leaks occur.

“In the US, in Texas and Pennsylvania, there’s loads of wells drilled—it’s almost like a sponge. Perhaps the leak through abandoned wells is very small and very minimal, but if you’ve got thousands of them in your area, that can create a bigger effect.”

To assess the risk posed by abandoned wells, the researchers assessed available data on the global distribution of abandoned wells, as well as rates of leakage recorded in previous studies of the hydrocarbon industry.

The third way CO2 could escape into the atmosphere is through natural faults in the land (2c). However, it is likely that developers would check for such land features before depositing CO2, Alcalde says, making the risk minimal.

The three ways that CO2 could become permanently trapped underground include residual trapping, when CO2 gets trapped in the small gaps between rocks; solubility trapping, which occurs when CO2 dissolves in water; and mineral trapping, the conversion of CO2 into solid mineral.

These methods are controlled by natural physical processes and can take hundreds or even thousands of years to trap CO2, Alcalde says:

“Mineralisation is the ultimate aim because the CO2 becomes pretty much a rock—it’s never going to come back to the surface.”

The poorly-regulated scenario represents the “highly unlikely” event of CO2 being stored in regions with poorly regulated oil and gas industries, the researchers say.

Each scenario assumes that CO2 storage begins in 2020 and ends by 2050, although the model runs 10,000 years into the future. The charts below show the expected leakage from each baseline scenario in model simulations.

The charts below show the spread of the results from 10,000 different simulations in the model. Each simulation made slightly different assumptions about the model parameters, including the fraction of CO2 injection wells that would leak, the number of abandoned wells that whose whereabouts are unknown and the leakage rate from natural pathways.

Grey bars show the number of model runs reaching different proportions of CO2 leakage, while the red line corresponds to the baseline scenario (as above).

The expected CO2 leakage is highest in the poorly-regulated onshore scenario, with 95 per cent of the model runs projecting CO2 leakage of up to 33 per cent.

The amount of leakage remains relatively low under poor regulation as a proportion of CO2 becomes trapped due to physical processes, such as mineralisation, the researchers say.

The findings show that “CO2 storage is safe”, says Alcalde:

“The technology is there, we know it works, we now know it’s safe and therefore it’s the time to go ahead and do it.”

However, other researchers are less confident about the potential of CCS. For example, a previous research paper published in 2010 modelling CO2 storage over 100,000 years found the technology could lead to “delayed warming in the atmosphere as well as oxygen depletion, acidification and elevated CO2 concentrations in the ocean”. Study author Prof Gary Shaffer, from the University of Copenhagen, writes:

“Geological storage may be more effective in delaying the return to the conditions of a business-as-usual projection, especially for storage in offshore sediments.

“However, leakage of 1 per cent or less per thousand years from an underground stored reservoir, or continuous resequestration far into the future, would be required to maintain conditions close to those of a low-emission projection with no sequestration.”

The new study “puts to rest fears about CO2 storage”, says Prof Martin Blunt, chair in petroleum engineering at Imperial College London, who was not involved in the research. He tells Carbon Brief:

“It’s an important study because it helps deal with common misconceptions regulators, the public and scientists not working in the field have with CO2 storage.

“CO2 storage is not like nuclear waste, which will corrode and eventually leak out of anything it’s stored in. Unlike nuclear waste, CO2 becomes safer and more secure the longer it stays in the ground due to a range of physical processes, such as mineralisation.”