Women on the margins of UN climate panel

A new study shines a light on the double barrier women scientists face in their own disciplines and as they attempt to make their voices heard in the global climate talks.

A 2013 special issue of Nature took a look at gender bias in science, and concluded that the field still was “institutionally sexist.” Women scientists make less money, and receive fewer promotions and grants than men, and are more likely to leave because of discrimination and family pressures, the journal said.

It’s no different for women in climate science. According to new research, it may be worse. But it’s complicated.

“Women climate scientists are physicists, geologists, geographers, etc. As such, they face barriers in their own disciplines in addition to barriers to their participation in reports such as the IPCC.” (The Intergovernmental Panel on Climate Change.)

The IPCC has been the authoritative scientific source on climate change since it began issuing reports in 1990. That’s where Gay-Antaki aimed her research lens, looking at the experiences of women who served on the panel.

When women are left out of climate science, we miss out on thousands of perspectives and important insights into climate change challenges and opportunities.

Her study, conducted with Diana Liverman, professor of geography at the University of Arizona, appears in the Proceedings of the National Academy of Sciences. Their research revealed a mixed picture — some good, some bad and some pretty ugly.

The study found a modest increase in women on the panel, from less than 5 per cent in 1990 to more than 20 per cent today, with more than 80 per cent of the women reporting they had been treated with respect. But some of the open-ended comments from surveys of more than 100 women told a different story.

“I didn’t feel welcome,” said one woman. Another found the process “to be male-dominated… by the older established men.” Another said: “The leadership [was] rather arrogant and not very inclusive. He only seemed to be interested in your opinion if you were an Ivy League-tenured, white male professor. In particular, researchers from developing countries felt excluded by him.”

These attitudes not only hurt women in the profession, but the quality of scientific research as well. “When women are left out of climate science, we miss out on thousands of perspectives and important insights into climate change challenges and opportunities,” Gay-Antaki said.

“Women bring many different perspectives,” she added. “There is no single female voice. A woman of color from the Global South will have different priorities than a white woman from the Global North. Both perspectives are important because they both talk about the same problem. However, because of several systems of oppression working simultaneously — read patriarchy, imperialism, etc. — women, for the most part, are not listened to as much as men.” 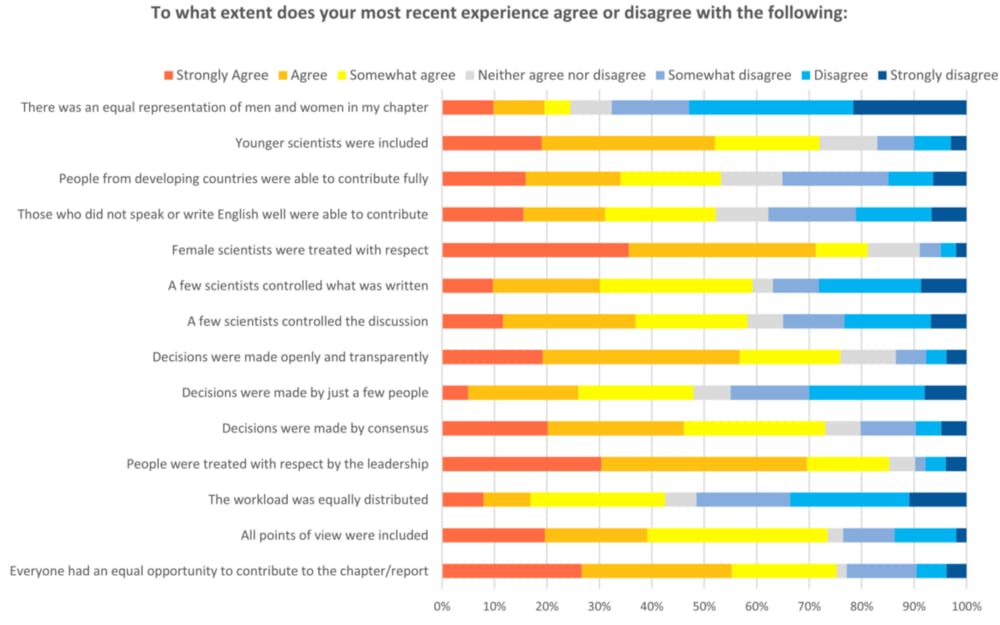 From a survey of IPCC staff. Source: PNAS

When holding leadership positions, they experienced skepticism on the part of men. “It seemed very difficult for some of the men in my chapter to accept that a woman was leading them,” one woman wrote. “Women were rarely given the word. Our suggestions were almost never taken up.”

Finally, another woman reported that childcare and family demands interfered with their ability to participate fully. “I was a single parent during the last IPCC cycle, so traveling was a major obstacle,” one woman wrote. “I managed because I really wanted to do this, but it was a large extra hurdle that caused me to arrive stressed at meetings, sometime to not have full attention.”

Gay-Antaki stressed that while the situation in climate science for women still was difficult, “not every woman will feel that [her] gender is a barrier,” she said.

One male IPCC participant, who declined to be identified (“because I don’t walk in her shoes”), said it “was pretty painfully obvious” that women were underrepresented as lead authors at the fifth assessment report. Yet, he added, their contribution to the IPCC was “outsized compared to their numbers.” 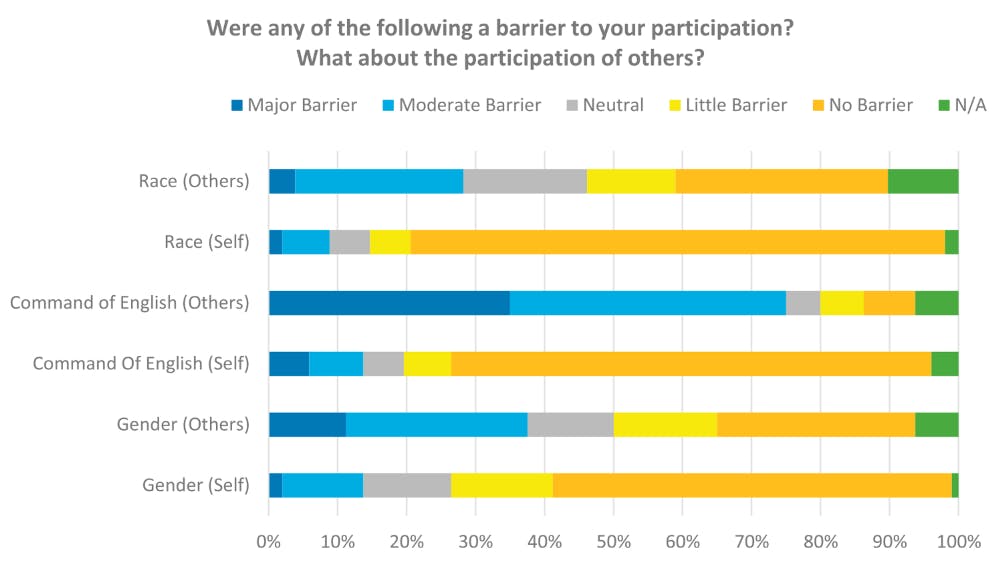 From a survey of IPCC staff. Source: PNAS

He named several women who were involved (atmospheric chemist Susan Solomon, the University of Edinburgh’s Gabi Hegerl and statistician Claudia Tebaldi of the National Center for Atmospheric Research) and described them as “among the best scientists in the world.”

Moreover, he also pointed out that Valerie Masson-Delmotte, research director of the French Alternative Energies and Atomic Energy Commission, will be running the IPCC’s sixth assessment, and “I look forward to meeting her.”

Climate scientist Sarah Myhre — who was not involved in the study — pointed out that women traditionally have had a tough time making inroads in science, but climate researchers have it much worse — they also have to grapple with the antipathy generated by climate deniers and the toxic anti-science views spouted by members of the current administration.

Chiara Lombardi, a scientist with the Italian National Agency for New Technologies, Energy and Sustainable Economic Development (ENEA), who has been working on innovative ways to help coral reefs survive the ravages of climate change, believes women provide an important dimension to climate research.

“They bring their determination, heart and global approaches in solving scientific questions,” said Lombardi, who also was not involved in the study. “They are ‘programmed’ to manage more things, to anticipate problems and have holistic views on life, [which they bring] to science.

Study author Gay-Antaki agreed, saying she hopes women’s future IPCC participation will be “more significant than simply being present,” adding: “The thing is to make sure to provide them with an adequate platform so that their voices are heard.”