Travel website TripAdvisor has announced that it will no longer sell tickets to tourism experiences that allow physical contact with captive, wild animals or endangered species, such as elephant rides and petting tigers.

Travel website TripAdvisor, and its booking service Viator, will no longer sell tickets to tourism experiences that allow petting or touching of wild animals, the company announced on October 12.

This includes all attractions where travelers can come into physical contact with captive, wild animals or endangered species, such as elephant rides, petting tigers, and swim-with-dolphin attractions, the website said in a statement.

“TripAdvisor’s new booking policy and education effort is designed as a means to do our part in helping improve the health and safety standards of animals, especially in markets with limited regulatory protections,” Stephen Kaufer, president and CEO of TripAdvisor, said in a statement. 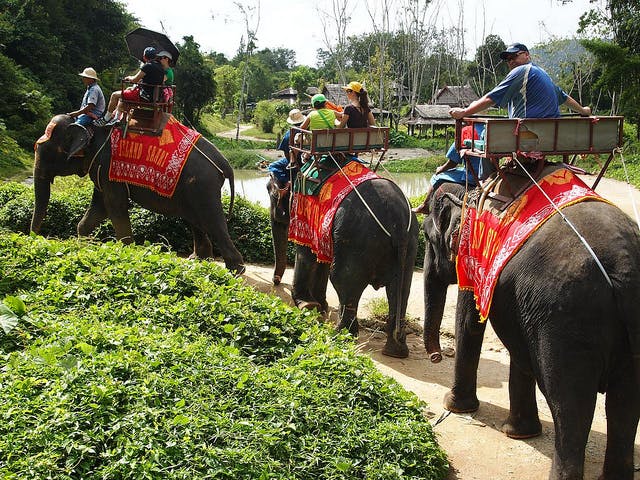 TripAdvisor’s new policy comes after more than a year of campaigning by several animal welfare groups such as the UK-based charity World Animal Protection (WAP), which claim that the internet giant has been profiting from selling tickets to attractions that involve wildlife abuse and cruelty.

Elephants used in elephant rides, for example, go through a training process called “crush” in which they are frequently starved, beaten and isolated, according to WAP. Similarly, tigers at tourist entertainment venues are typically kept in extremely poor conditions, a recent investigation by WAP found. They are held in small enclosures, with limited access to fresh water and often starved and punished using pain and fear.

Millions of tourists visit wildlife tourism attractions every year. But tourists tend to be unaware of the animal exploitation involved in many of these places, and they often give positive reviews on TripAdvisor, a recent study found. The website’s new booking policy can help tourists make informed decisions, conservationists say.

In addition to the booking ban, TripAdvisor also plans to develop and launch an education portal in partnership with several animal protection groups such as Oxford University’s WildCRU, People for the Ethical Treatment of Animals (PETA), Association of Zoos and Aquariums (AZA), Global Wildlife Conservation (GWC) and WAP.

TripAdvisor’s new booking policy and education effort is designed as a means to do our part in helping improve the health and safety standards of animals, especially in markets with limited regulatory protections.

The portal will be linked to every animal attraction listing on the website via a “PAW” icon, and will provide links and information on animal welfare practices involved at the various attractions.

Bookings for some wildlife tourism venues through TripAdvisor will be stopped immediately, the website said, while the ticket sales for others will be ceased by early 2017, along with the launch of the education portal.

Some exemptions to their booking policy include animal attractions that involve domestic animals, such as horseback riding or children’s petting zoos with animals like rabbits; certain aquarium touch pools used for education purposes, and some voluntourism programs for endangered species preservation at zoos, aquariums or sanctuaries.

“We commend TripAdvisor for taking steps to improve the standards for interactions with wild and captive species in tourism,” Wes Sechrest, Chief Scientist and CEO of Global Wildlife Conservation said in the statement.

“This will encourage people to visit destinations that promote the safe viewing of wildlife in the wild, such as national parks, as well as legitimate rescue centers and zoological facilities that support on-the-ground wildlife conservation efforts. We want people to connect with wildlife and feel inspired by wild places, and this will help provide a guide for how to do so without further endangering our planet’s biodiversity.”