Restoring soils could remove up to ‘5.5bn tonnes’ of greenhouse gases every year

A new analysis takes a look at how protecting and replenishing soils – both in agricultural and natural landscapes – could help to combat warming.

Replenishing and protecting the world’s soil carbon stores could help to offset up to 5.5bn tonnes of greenhouse gases every year, a study finds.

This is just under the current annual emissions of the US, the world’s second largest polluter after China.

Around 40 per cent of this carbon offsetting potential would come from protecting existing soil carbon stores in the world’s existing forests, peatlands and wetlands, the authors say.

In many parts of the world, such soil-based “natural climate solutions” could come with co-benefits for wildlife, food production and water retention, the lead author tells Carbon Brief.

The top metre of the world’s soils contains three times as much carbon as the entire atmosphere, making it a major carbon sink alongside forests and oceans.

Soils play a key role in the carbon cycle by soaking up carbon from dead plant matter. Plants absorb CO2 from the atmosphere through photosynthesis and this is passed to the ground when dead roots and leaves decompose.

But human activity, in particular agriculture, can cause carbon to be released from the soil at a faster rate than it is replaced.

Few countries record data on soil-carbon loss directly from agriculture, according to the Intergovernmental Panel on Climate Change’s most recent assessment report, making it difficult to understand the degree to which soil carbon losses are contributing to climate change.

The new analysis, published in Nature Sustainability, takes a look at how protecting and replenishing soils – both in agricultural and natural landscapes – could instead help to combat warming.

If finds that, if techniques to improve soil carbon were rolled out at the maximum assumed level worldwide, they could remove up to 5.5bn tonnes of CO2e a year.

“I talk about soil as being the forgotten solution. What we’re really trying to emphasise is that soil is important and so it should not be ignored, but also not exaggerated.”

For the analysis, the authors built on an earlier study which looked at the global greenhouse gas removal potential of all “natural climate solutions”. The term is used to describe a range of negative emissions techniques that aim to enhance the ability of natural ecosystems to remove CO2 from the atmosphere.

The research finds that a quarter of all the greenhouse gas removal ability of natural climate solutions comes from soil-based techniques, such as protecting and restoring forest soils, peatlands and wetlands.

The chart below shows the greenhouse gas removal potential of various soil-based natural climate solutions. The figures are shown in billion tonnes of CO2e per year. 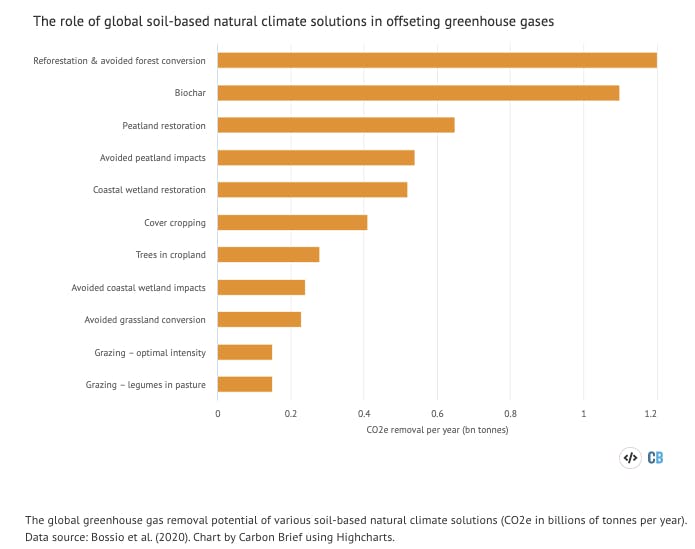 The research shows that the largest greenhouse gas removal potential comes from protecting existing forests and reforestation. This technique could offset 1.2bn tonnes of CO2e a year, when only forest soil carbon is considered.

Forests soils are a globally important carbon store. They can be particularly carbon-rich because they absorb high densities of dead plant matter. Forest soils also play a significant role in absorbing methane.

Another soil technique with large potential is “biochar”, according to the research. Biochar is a carbon-rich charcoal which, when sprinkled on land, can boost soil carbon storage.

It is often suggested that biochar should be spread across agricultural land because, as well as enhancing soil carbon storage, it could enhance crop productivity.

Other agriculture-based soil carbon techniques with large potential include “cover cropping”, which is the practice of planting crops to cover soil rather than for being harvested, as well as including more trees in cropland.

Both of these techniques could help protect and build on soil carbon stocks because the roots of plants can act as anchors, lessening the impact of soil erosion, Bossio explains.

Such agricultural techniques can be seen as “no-brainer” options for boosting soil carbon, she adds:

Peatlands are carbon-dense boggy environments made up of partially decomposing organic matter. They cover just 3 per cent of the world’s surface, but hold up to a third of its soil carbon.

Restoring wetlands could also have an important role in removing greenhouse gases from the atmosphere, according to the research.

Like peatlands, wetlands contain water-logged carbon-rich soils. A recent study found the Amazon’s wetlands are twice as carbon rich as its rainforests, with soils holding the majority of this carbon.