The well-being of tens of thousands of athletes and spectators at Asia’s biggest sporting event later this year will depend on an unusual pair: palm oil and pulpwood companies.

These industries dominate the landscape around the city of Palembang in South Sumatra province in Indonesia, which is co-hosting, along with Jakarta, the Asian Games this August.

The event is the biggest on the Asian sporting calendar, with some 15,000 athletes from 45 countries expected to take part, drawing hundreds of thousands of visitors from across the continent.

But organizers are wary of the danger of toxic haze from the burning of brush and peatlands, a phenomenon that flares up across palm oil and pulpwood concessions throughout Sumatra and Indonesian Borneo annually. The dry season this year, which is when the fires peak, is expected to take hold from June through September, coinciding with the Asian Games.

South Sumatra is home to many pulpwood and oil palm concessions, with Indonesian paper behemoth Asia Pulp and Paper (APP) having a particularly large presence there. The province was the hardest hit by the particularly severe fires of 2015, when 3,591 square kilometers (1,386 square miles) of land was razed — an area greater than the U.S. state of Rhode Island. The haze that year was exacerbated by the burning of degraded peatland that had been drained to make way for pulpwood and oil palm plantations and rendered highly combustible.

The combination of drained peat forests and a dry climate, effectively turning the province into a tinderbox, has many concerned that the Games will be hit by haze. Among them is President Joko “Jokowi” Widodo, who has warned of disruptions from the haze and reputational damage to Indonesia during the high-profile sports event.

“Don’t let this event be marred by haze and forest fires that will hurt [our] image and disrupt flights,” he said in February at a meeting of ministers and other top officials tasked with preventing land fires. “We have to work hard so that the Asian Games run smoothly without any problems from forest fires.”

Ensuring a haze-free Asian Games, authorities say, will depend heavily on the companies operating in South Sumatra. 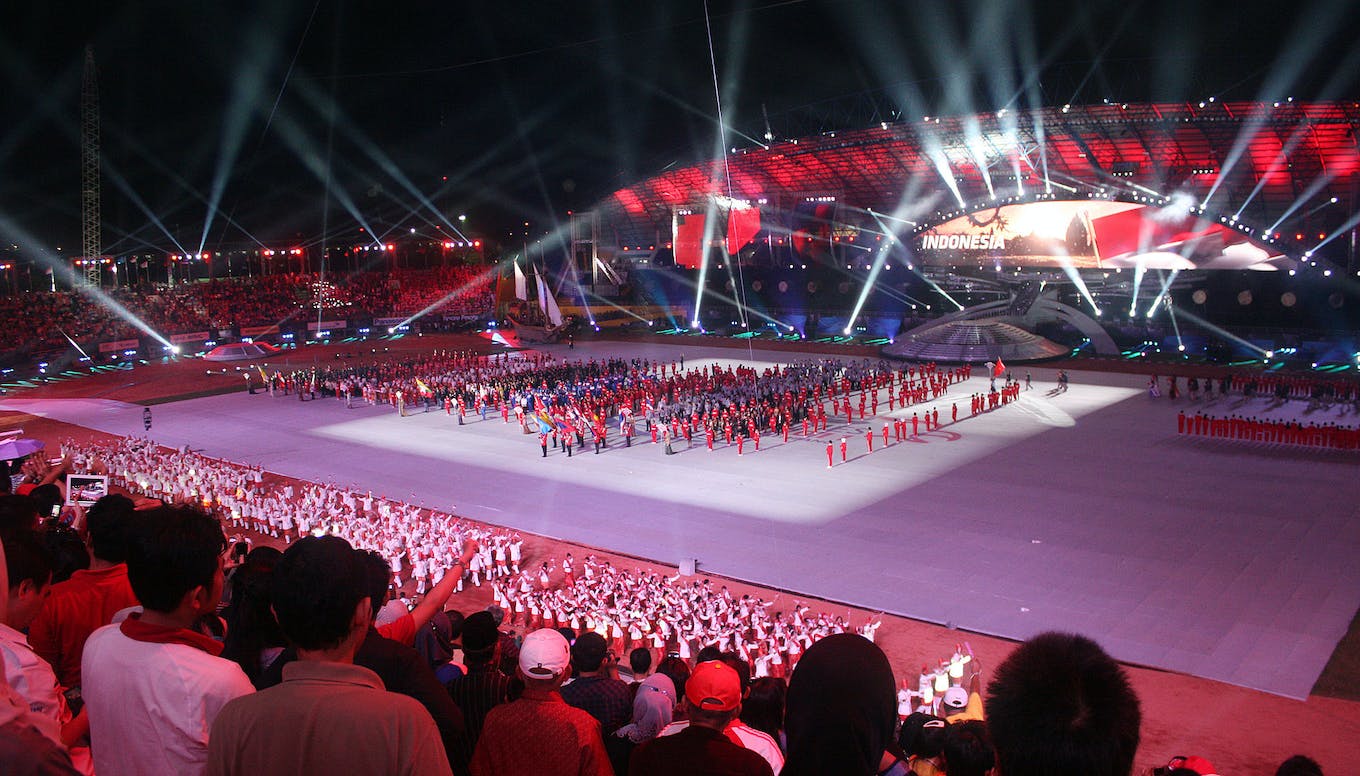 Indonesia hosted South East Asian games successfully in 2011, as seen in the image. Now, for the second time, this decade the country will host 15,000 athletes from 45 countries expected to take part, drawing hundreds of thousands of visitors from across the continent. Image by Gunawan Kartapranat, CC BY-SA 3.0

Many of these concessions overlap or border with eight of 14 villages in South Sumatra that the presidentially appointed Peatland Restoration Agency (BRG) has described as being prone to fires. The BRG, tasked with leading efforts to restore degraded peatland across the country, defines fire-prone villages as those with frequent instances of burning.

The proximity of these concessions to the fire-prone villages makes “the role of the pulpwood companies very big,” said Budi S. Wardhana, the deputy for planning at the BRG, on the sidelines of a recent national gathering of peatland farmers in Kiram village, South Kalimantan province.

He said it was important for these villages to have drilled wells that residents could use to draw water quickly to extinguish small pockets of fires before they spread out of control. To that end, the BRG is working with the national geological agency to locate groundwater reservoirs in the 14 villages. Budi said the wells needed to tap reservoirs and not the water from peat swamps, which would drain the swamps and render them susceptible to burning.

“And it has also been agreed that the water will not be used to irrigate crops, but to rewet peatlands and for first response [to fires],” he said.

The BRG already had long-term plans in place for peat restoration in the 14 villages in South Sumatra, but has had to push them forward because of the Asian Games. It expects the restoration to be completed by June, Budi said.

The agency has also met with the pulpwood and palm oil business associations, APHI and GAPKI, respectively, to ensure the companies understand what is at stake and to impress on them the urgency of restoring those parts of their concessions that are prone to fire.

Many of our restoration areas in South Sumatra fall within concessions. In those cases, we can just order them [to restore the peat areas].

BRG head Nazir Foead told the companies they had a responsibility to prevent peat fires and to restore degraded peatland within their concessions. Many of these concessions include areas of deep peat that contain high biodiversity. Under Jokowi’s signature anti-haze regulation, these areas must be zoned for conservation and rewetted to prevent fires.

These areas are part of a total 24,000 square kilometers (9,300 square miles) of degraded peatland that the government hopes to restore nationwide.

Degraded peatlands that fall within existing plantation concessions account for 78 percent of the 6,160 square kilometers (2,380 square miles) of degraded peat that must be restored across South Sumatra. This eases the BRG’s workload by putting the obligation on the concession holders, Nazir said.

“Many of our restoration areas in South Sumatra fall within concessions. In those cases, we can just order them [to restore the peat areas],” he said.

To date, 88 palm oil and 34 pulpwood companies have had their peat restoration plans approved, according to the Ministry of Environment and Forestry. Some have already started the restoration work.

“Even before they submitted their plans, some of them had restored their pulp concessions and plantations,” said Karliansyah, the ministry’s head of environmental pollution and damage control.

He said the companies had restored a combined 10,000 square kilometers (3,900 square miles) of degraded peatlands nationwide since 2015, mostly by blocking the canals initially dug to drain the peat in preparation for planting.

In addition to restoring peatlands, some companies have rolled out other fire-prevention programs. This includes APP’s Fire-Aware Village program, in which the company helps villagers adopt agroforestry — interspersing crops among trees, rather than clearing forest for monoculture farming — as part of wider measures to mitigate fires and encroachment into forests around the company’s concessions.

Specifically in preparation for the Asian Games, APP said it planned to intensity its fire-prevention program, which will run from May through October this year, with a total investment of $3.8 million. APP fire data and IT manager Gustaf Rantung said the program included more detailed mapping on fire-prone areas and adding patrol towers to monitor areas up to a radius of 10 kilometers (6 miles).

APP plans to add five patrol towers in Ogan Komering Ilir district, and eight towers each in Banyuasin and Musi Banyuasin districts, all in South Sumatra province. For areas with less dense vegetation, APP will build 25 smaller towers to replace land patrols, which Gustaf said were not as effective for detecting fire spots.

The BRG’s Budi said it made business sense for companies to prevent fires on their concessions. “It’s related to their own survival as well because they want to plant acacia trees,” he said. “If there are fires, they can’t harvest the trees.”

He called on the companies to go a step further by helping drill wells for the fire-prone villages as a first line of defense. “These wells can be quite costly as they can go more than 80 meters [260 feet] deep,” he said. “The cost can reach hundreds of millions of rupiahs,” or thousands of dollars.