Global warming to date could ‘obliterate’ a third of glacier ice

The warming the world has already experienced could be enough to melt more than a third of the world’s glaciers outside Antarctica and Greenland – regardless of current efforts to reduce emissions.

That is the stark conclusion of a new study, which analyses the lag between global temperature rise and the retreat of glaciers.

The relatively slow response of glaciers to global warming means it will take to the end of the century – and beyond – to see the benefits of mitigation efforts in the coming decades, the study says.

The “baked in” glacier loss from observed warming has largely been overlooked, another scientist tells Carbon Brief, meaning “we really are on course to obliterate many of these mountain landscapes”.

Glaciers are huge rivers of ice that ooze their way over land, powered by gravity and their own sheer weight. They accumulate ice from snowfall and lose it through melting.

As global temperatures have risen, many of the world’s glaciers have already started to shrink and retreat. Continued warming could see many iconic landscapes – from the Canadian Rockies to the Mount Everest region of the Himalayas – lose almost all their glaciers by the end of the century.

But glacier retreat does not happen overnight. So if global temperature rise stopped immediately, how much of the world’s glacier ice could be saved? And for how much is its fate already sealed?

This is what the new study, published in Nature Climate Change, aims to work out.

The study focuses on the lag between rising temperatures and how quickly glaciers adjust. An ice cube makes a suitable metaphor, as three of the authors – Prof Ben Marzeion, Dr Georg Kaser and Dr Fabien Maussion – explain to Carbon Brief over email:

“If you take an ice cube from the fridge – i.e. from one climate – to the kitchen table – i.e. a new climate – it will, finally, but not instantaneously, melt. The time it takes to fully melt the cube depends on: a) the size of the cube; and b) the temperature in your kitchen.”

In other words, the world’s glaciers have not yet caught up with the rate of warming over recent decades. This means they will continue to change, even if warming stops, the authors say:

“If the glaciers are out of equilibrium, they will respond by either expanding or retreating and, eventually, stabilising at a different size. The difference between this glacier state and the actual present glacier state is the committed glacier change.”

The researchers worked out this committed change using a glacier model and a database of glacier outlines called the Randolph Glacier Inventory. They limited their study to glaciers outside of Greenland and Antarctica.

Their results suggest that even if there is no additional warming of the climate system, 36 per cent of glacier ice will still eventually disappear. That is enough to add 11cm to global sea levels.

This would take centuries to play out, the authors note:

“On the global scale, it is fair to say that most adjustment will have happened within 200 years after climate change came to a halt and, after about 500 years, the adjustment will be more or less complete.”

As part of the study, the researchers managed to identify an approximate relationship between human-caused carbon emissions, the temperature rise they cause and the committed change in the world’s glaciers.

They find that every kilogram of CO2 emitted today will eventually be responsible for around 16kg of glacier ice melt.

A similar relationship was identified in a Science study published in 2016, which found that, for every tonne of CO2 emitted into the atmosphere, summer sea ice cover in the Arctic shrinks by three square metres.

Of course, it is impossible that global temperatures would just stop rising overnight. Therefore, the researchers looked at the different rates of glacier melt, according to scenarios of how quickly CO2 emissions are reduced over the course of this century. 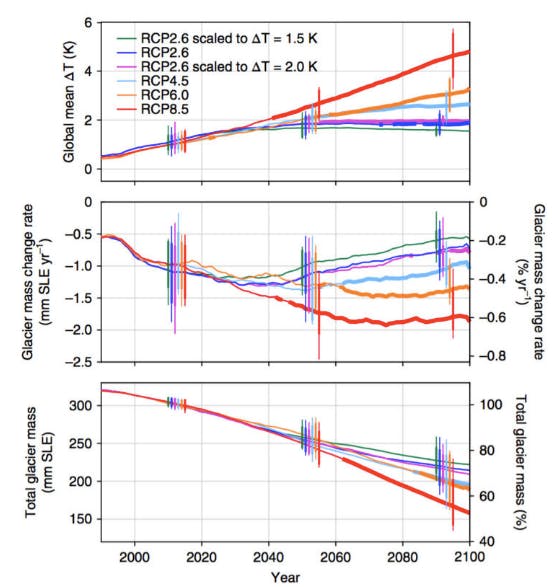 Projections for global average temperatures relative to 1850-79 (upper chart), rates of glacier change (middle) and total glacier mass (lower chart) for the 21st century. Projections are shown for scenarios from 1.5C of warming (green line) up to the business-as-usual scenario RCP8.5 (red). Vertical lines show uncertainty range of each projection at three points during the century. Note: the lines in the first two charts have been smoothed using ten-year averages (to make the chart clearer). Source: Marzeion et al. (2018)

Projections under all of the scenarios show global temperatures continuing to rise until around 2040 (upper chart). Therefore, the rate of glacier loss accelerates in all scenarios for the first half of this century (shown by descending lines in middle chart).

However, as the lower chart shows, total glacier mass continues to decline in all scenarios. This is because the glaciers are still adjusting to the warmer climate, even after temperature rise stabilises.

Between now and the end of the century, glacier melt under the 1.5C scenario would add 7.6cm to global sea levels, the study estimates. This increases to 8.9cm for 2C – all the way up to 14.2cm for RCP8.5.

What is notable from the charts above is that it takes quite a long time for the benefits of more ambitious emissions cuts to be realised.

As the authors put it in their paper, reductions in emissions “will only have very limited influence on on glacier mass change in the twenty-first century”.

This is because the glaciers are still adjusting to the warming already seen and will take a lot longer than the end of the century to adjust to the warming that follows.

Therefore, when it comes to the world’s glaciers, the decisions taken today on how quickly to cut emissions will be for the benefit of future generations rather than today’s, the authors say:

“Our results rather show that even a time horizon of 100 years is short-sighted when it comes to glaciers…Our responsibility stretches a lot further into the future.”

But Dr Alex Gardner, a research scientist in the “sea level and ice group” at the Jet Propulsion Laboratory at Caltech, argues that the differences between scenarios for glacier mass loss this century are not as small as the authors say. He tells Carbon Brief:

“The figure [shown above] shows a reasonably wide spread between optimistic and pessimistic emission scenarios with rates of contribution ranging from 0.50-2.0mm per year of sea level equivalent.”

Gardner also notes that the study does not include Greenland and Antarctica – which contain 30 per cent of global glacier ice – and their “ice sheets are the big unknowns for future contributions to sea level”. Nonetheless, it is “another great piece of work” by the authors, says Gardner, which “reinforces previous works showing that a large amount of future glacier loss is already ‘baked in’”.

On course to ‘obliteration’

As well as adding to sea levels, melting glaciers have considerable impacts on high mountain regions and downstream communities that rely on them as a source of freshwater via glacier melt “runoff”. The authors explain:

“Generally, you can expect that regions with large glacier surfaces and very dry warm seasons will see the strongest impacts on river runoff. Transiently, as glaciers melt, the runoff may first increase and later will decrease as glaciers become small.”

Despite these impacts, the magnitude of additional glacier retreat has been underappreciated by scientists, policymakers and the public, says Prof Gerard Roe from the University of Washington, who led a study in 2016 that identified shrinking glaciers as “categorical evidence” of human-caused climate change. He tells Carbon Brief:

“Glaciers are icons of climate change. We’ve used their observed retreat as a way of reaching back into past centuries to understand the changes we’ve caused. Studies like this tell us that the continued retreat of glaciers allows us to reach one or two hundred years into the future, and gain an appreciation of the changes we are already committed to.”

And these changes are heading in one direction, warns Roe:

“We really are on course to obliterate many of these mountain landscapes.”